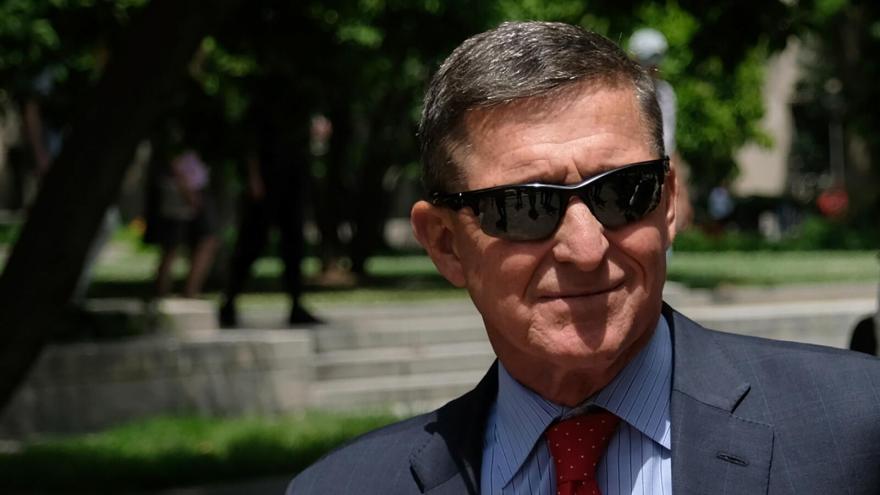 (CNN) -- A federal appeals court ruled Monday against Michael Flynn and the Justice Department in their request to quickly shut down his criminal case.

The 8-2 decision restores power to a judge to question the Justice Department's moves in the politically divisive case, when Attorney General William Barr dropped charges against President Donald Trump's former national security adviser earlier this year despite twice pleading guilty to lying under oath to lying to the FBI.

Flynn had fought District Judge Emmet Sullivan's decision to ask a third-party lawyer to argue against the Justice Department's dismissal in the case, and his plans to hold a hearing, which has not yet happened.

Monday's decision adds what may be the most consequential round yet to what's become an unusual and deeply political court case in an election year, and one of the most symbolic prosecutions of a Trump adviser during this presidency. Previously, a group of three judges on the DC Circuit Court of Appeals court sided 2-1 with Flynn in ordering the lower court to toss his case. Monday's 8-2 decision by the full court reached the opposite conclusion.

In recent months, Flynn's case has become a conduit for President Donald Trump and his supporters' criticism of the Russia investigation. Separately, the case has led many in the legal industry to publicly oppose Barr's leniency toward friends of the President, saying his decision in the Flynn case twisted the law to help Trump politically. The fate of Flynn's case is widely considered to be a type of Rosetta Stone for how the public may view the Mueller investigation -- with Flynn's exoneration undermining findings of misconduct by the President, or Flynn's sentencing keeping pressure on the President.

DC Circuit Judge Thomas Griffith, a George W. Bush appointee in his last day before retiring from the bench, warned in a concurring opinion that the latest twist in Flynn's case shouldn't be read as a political statement.

"In cases that attract public attention, it is common for pundits and politicians to frame their commentary in a way that reduces the judicial process to little more than a skirmish in a partisan battle," Griffith wrote. "The party affiliation of the President who appoints a judge becomes an explanation for the judge's real reason for the disposition, and the legal reasoning employed is seen as a cover for the exercise of raw political power. No doubt there will be some who will describe the court's decision today in such terms, but they would be mistaken."

Dissent: 'The prosecution no longer has a prosecutor'

Judge Neomi Rao, a Trump appointee who also served on the original appeals court panel that had voted for Flynn and now is in the minority, wrote her own dissent to argue that she believes Flynn's case will ultimately be dismissed no matter what.

"In Flynn's case, the prosecution no longer has a prosecutor. Yet the case continues with district court proceedings aimed at uncovering the internal deliberations of the Department. The majority gestures at the potential harms of such a judicial intrusion into the Executive Branch, but takes a wait-and-see approach, hoping and hinting that the district judge will not take the actions he clearly states he will take," Rao wrote.

If Flynn were to appeal to the Supreme Court to keep Sullivan at bay longer -- still a possibility -- Rao's dissent and her previous opinion in the case could become important legal arguments for his team to push to the justices.

Sullivan, who hired a lawyer to argue the case regarding his authority and asked for the full panel to hear it this summer, had taken those steps for sound legal reasons, at the invitation of the appeals court, and not because he had taken a side in Flynn's underlying case, the court said.

"Nothing about that participation created a reasonable impression of partiality, nor could it," the appeals court wrote in its opinion Monday.

This story has been updated with language from the dissent.