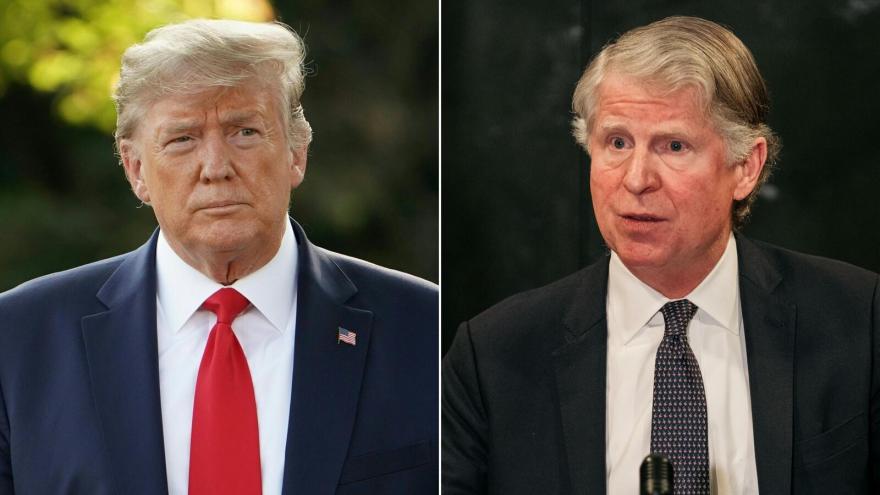 A federal appellate court said it would issue a ruling on President Donald Trump's request for a stay pending appeal of his lawsuit against the Manhattan district attorney's office to block a subpoena for years of his financial records.

(CNN) -- President Donald Trump won further delay of the enforcement of a subpoena for years of his financial records after a federal appellate court ruled Tuesday that it should first decide the appeal of his lawsuit to block the Manhattan district attorney's office from obtaining the documents.

A three-judge panel on the 2nd US Circuit Court of Appeals said the court would hear oral arguments in the appeal on September 25, bringing the court's decision of the case into mid-fall and making a hand-over of the documents to the district attorney's office increasingly unlikely to happen prior to the presidential election.

Earlier Tuesday, the panel had heard oral arguments regarding Trump's motion to prevent the subpoena to his longtime accounting firm from going into effect while the appellate court decides the case.

An attorney for Trump, William Consovoy, told the judges that the subpoena "is an arbitrary fishing expedition" and that it was "issued in bad faith in order to harass the President."

The primary question, Consovoy said, is "will the President be given an opportunity to appeal that ruling before his personal records are disclosed to the grand jury and the status quo is irrevocably changed?"

"You can't make them forget what they learned," Consovoy said. "You can't unring that bell."

An attorney for the Manhattan district attorney's office, Carey Dunne, told the panel that Trump's argument that the subpoena is overly broad is based on inaccurate assumptions about the investigation, namely that it's limited to an inquiry regarding hush-money payments made to women who alleged affairs with Trump during the 2016 presidential election. Trump has denied the affairs.

"No facts in the complaint support that inference," Dunne told the panel. He added that Trump couldn't know the scope of the investigation, because "what the grand jury's looking at is secret. We're not allowed to make that public."

Manhattan District Attorney Cy Vance's office has been examining whether Trump or the Trump Organization violated state laws in connection with the hush-money payments. But the investigation has also looked into whether business records filed with the state were falsified and if any tax laws were violated, CNN has reported.

The subpoena asked for records from the accounting firm, Mazars USA, related to Trump, the Trump Organization, his foundation and several related subsidiaries. The requested documents, court records said, pertain not just to business in New York, but also in other states like Florida and California, countries including Turkey, Canada and Indonesia, as well as the city of Dubai.

On Tuesday, Judge John M. Walker Jr. questioned why the district attorney's office might need records from a wide variety of entities, including some abroad. Dunne replied that "there's nothing unusual" about their office seeking information from foreign sources, particularly in a situation in which "the company at the center of all of that international activity has its headquarters in Manhattan."