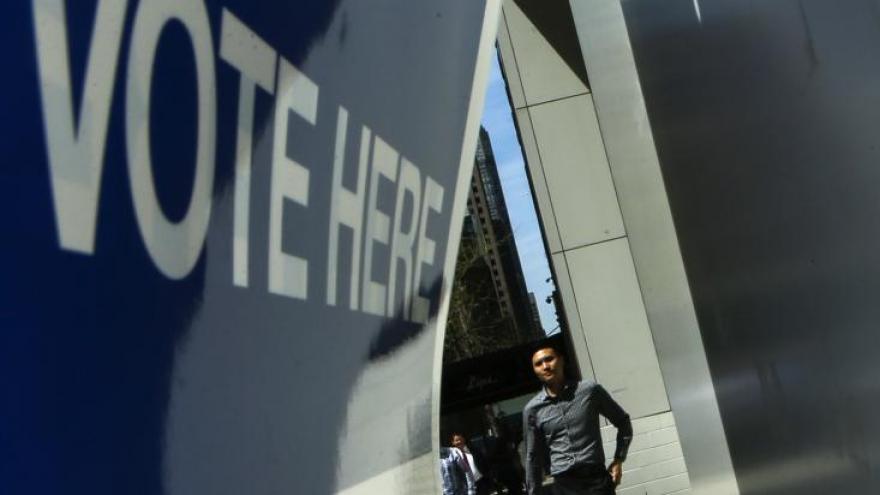 A man arrives at a polling station to vote during New York State primary presidential election on April 19, 2016, in Manhattan, New York.

(CNN) -- The US Court of Appeals for the Second Circuit ruled Tuesday that the New York Democratic presidential primary may proceed as planned next month.

The three-judge panel's ruling affirmed a federal judge's order from early May to hold the primary election on June 23 as planned and to reinstate qualified presidential and delegate candidates to the Democratic primary ballot. The state had appealed the order.

"We have reviewed all of the remaining arguments raised by Defendants on appeal and find them to be without merit," the judges wrote in Tuesday's decision.

Following the decision, New York State Board of Elections co-chair Douglas Kellner said another appeal would not be filed.

"Commissioner Spano and I have decided not to appeal to the US Supreme Court so we can focus all of our attention on the daunting tasks of managing the primary election in a way that minimizes the risks to the public and to election workers, while we continue to urge the voters to take advantage of Governor Cuomo's executive orders to permit the widespread use of absentee ballots during the public health emergency," Kellner said in a statement.

In late April, Democrats on the state board voted to remove all the Democratic presidential candidates who had suspended their campaigns, leaving former Vice President Joe Biden as the only name on the ballot, and canceled the presidential primary amid coronavirus fears. The move came after Democratic New York Gov. Andrew Cuomo's executive order in March that shifted the primary from April 28 to June 23.

The cancellation of the primary prompted a lawsuit from former presidential candidate and current CNN contributor Andrew Yang and several New Yorkers who had hoped to serve as his delegates to the Democratic National Convention. Vermont Sen. Bernie Sanders' campaign also filed a third-party brief in support of the lawsuit. Sanders ended his presidential bid last month, but has said he would remain on primary ballots in order to amass delegates and influence the party platform at this year's Democratic convention.

In response to the court's ruling Tuesday, Yang tweeted: "Thrilled that democracy has prevailed for the voters of New York!"

Sanders campaign manager Faiz Shakir also applauded the appeals court's decision in a statement: "With today's decision, which affirmed the District Court's recent ruling, we expect New York to work to make voting safe, rather than wasting taxpayer money trying to disenfranchise New York voters. This ruling is a victory for democracy."