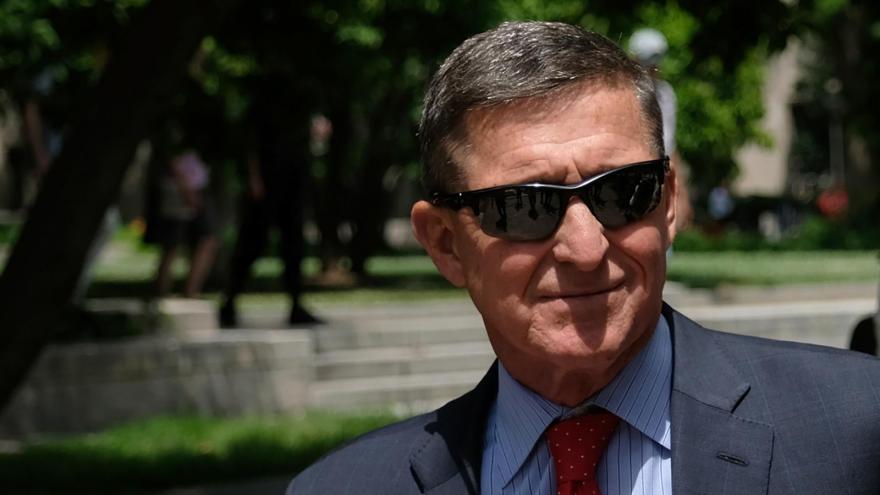 (CNN) -- A federal appeals court on Tuesday pushed back on former national security adviser Michael Flynn's effort to have his criminal case dismissed immediately and the Justice Department's reasoning that a judge shouldn't consider why prosecutors dropped his almost 3-year-old guilty plea deal this year amid a political firestorm.

The case has had countless twists since Flynn, a retired Army lieutenant general and top intelligence official, pleaded guilty to lying to the FBI about his talks with the then-Russian ambassador about approaches that would undermine Obama administration policy before Trump took office.

The DC Circuit Court of Appeals hearing Tuesday morning was one of the most consequential yet in the years of court hearings for Flynn, and grappled with major questions about the role of courts and the Justice Department in criminal cases.

Ten judges on the appeals court reheard the arguments, after wiping out a previous Circuit Court ruling that ordered a quick dismissal earlier this summer, wresting oversight of the case from the trial judge.

The judges questioned lawyers for Flynn, the Justice Department and for his trial Judge Emmet Sullivan for almost four hours Tuesday, with several judges directing harsh questions primarily to Flynn's lawyer and then the Justice Department's acting solicitor general, both of whom want the case dismissed.

A judge's role in reviewing case dismissals was "created by the Supreme Court to examine cases of favoritism to politically powerful defendants, and that seems to be part of the wheelhouse of what is going on here," Judge Thomas Griffith, a Republican-appointed jurist who is retiring from the bench Sept. 1, said during the hearing.

The judges on Tuesday pressed for explanations on why an appeal in Flynn's case is worthy at this stage -- before Sullivan reviews the Justice Department's motion to dismiss -- and about the authority of Sullivan to second-guess the Justice Department. The judges also closely read the legal steps taken in Flynn's case, raising the possibility that the appeal came out of order.

Many wove in questions about the divisive politics around Flynn, and how Flynn prompted the appeal before Sullivan had even ruled on dismissal request.

Judge Robert Wilkins, who previously voted against Flynn and for judicial control during his first appeal round, used a hypothetical of the attorney general being caught on video tape accepting a bribe to let a defendant walk free. In that example, the courts shouldn't have the ability to check a motion to dismiss, the Justice Department lawyer responded.

"What self-respecting Article III district judge would simply jump at an order [to dismiss the case] without doing what he could do to understand both sides?" Judge Nina Pillard, also questioning Flynn and the DOJ's arguments, said.

"It's just really striking and remarkable. What is the government worried about?" Pillard asked later, about the Justice Department's opposition to the trial judge's ability to hold a hearing.

Another judge, Karen Henderson, who previously sided with Flynn, used her time at the hearing to pose what she called a rhetorical question, a quote from Henry David Thoreau that laid plain her views on the case.

"Are you familiar" with the quote, she asked Flynn's defense attorney Sidney Powell, "'Some circumstantial evidence is so strong as when you find a fish in the milk. Do you think that applies in this case?'"

In one of the more surprising exchanges during the almost four-hour hearing, the Justice Department's attorney told the court that Attorney General William Barr may have additional information that he hasn't shared in court that contributed to the decision to drop Flynn's criminal case.

"I just wanted to make clear that it may be possible that the Attorney General had before him information that he was not able to share with the court," acting Solicitor General Jeffrey Wall said during the arguments. "And so what we put in front of the court were the reasons that we could, but it may not be the whole picture available to the executive branch."

The assertion adds another layer of intrigue to a case that has allowed conservatives and especially President Donald Trump to sow doubt about the actions of investigators as they pursued Russian interference in the 2016 election.

Wall raised the possibility of additional information when pressed on the judicial branch's ability to question Justice Department reasoning in its prosecutorial decisions. The Justice Department has argued the judiciary shouldn't be able to second-guess the executive branch's choices to bring or drop criminal cases.

But it was the same type of vague flagging of unknown details about the Russia investigation that Barr has done in media interviews where he condemns the FBI's or the special counsel's office's approach to Flynn. Barr has launched reviews of both the Flynn case and intelligence used in the early Russia investigation, and has come under fire for his reversal on prosecuting Flynn, who pleaded guilty, and for fueling speculation of so-called "Deep State" misconduct as Trump runs for reelection.

The case is ultimately a separation of powers fight between a judge's authority and the Justice Department's decision to drop a prosecution, set against the political divide over the Russia investigation, which President Donald Trump, Barr and Flynn's lawyers have fueled this year by questioning how the FBI conducted the probe.

Before Flynn prompted appeals, Sullivan had questioned the Justice Department's about-face in the case by asking a former federal judge to argue against the dismissal. Sullivan also had planned to hold a hearing before deciding what to do, which he suspended as the appeals courts considered the standoff. Sullivan appeared to be weighing whether he could sentence Flynn without prosecutors' support and whether Flynn could be held in contempt for potentially perjuring himself by swearing separately under oath that he was both guilty and innocent.

Flynn was set to serve a likely zero to six months in prison for lying.

Tuesday's hearing made clear that if Sullivan were to refuse to dismiss Flynn's case and move toward sentencing, the case would end up back before the appeals court. Sullivan's attorney Beth Wilkinson told the court that when they rule, the judge is likely to follow their order. He also may not ask invasive questions of the Justice Department's process, if he wins and has the opportunity to hold a hearing.

Some of the judges pressed her on whether Sullivan would be able to refuse to dismiss the case -- exposing how unusual the legal issues have become with Flynn.

Sullivan "fails to justify the district court's unprecedented intrusions on individual liberty and the Executive's charging authority," DC Appeals Court Judge Neomi Rao, a Trump appointee, wrote in the circuit's prior 2-1 opinion in the case.

A ruling in favor of Flynn could lead to his case's dismissal and strip Sullivan of the power to question the Justice Department's prosecution decision, while a ruling in favor of the judge could keep Flynn's criminal case alive in court --potentially for several more weeks or even into 2021. No ruling is expected Tuesday.

Though full court hearings are extremely rare at the DC Circuit, this is the second time the court has reheard a case related to the Mueller investigation -- the first being the House subpoena of former White House counsel Don McGahn, which the court decided last week by affirming Congress' right to sue and sending proceedings back to the trial-level judge.

DC Circuit Judge Greg Katsas -- a Trump appointee who worked in the White House counsel's office while Flynn was national security adviser -- has apparently recused himself from the arguments and will not hear the case on Tuesday. That leaves the makeup of seven Democratic appointees and three Republican appointees on the court as a potential uphill climb for Flynn.

The Flynn case has prompted criticism from Republicans on the worthiness of the Russia investigation, from Democrats and former prosecutors on Barr's decision to drop Flynn's charge and from Flynn supporters on the approach taken by Sullivan.

In recent weeks, Barr has relied on one of his US attorneys to send FBI documents from the early Russia investigation to the Flynn legal team, which they then make public in court filings.