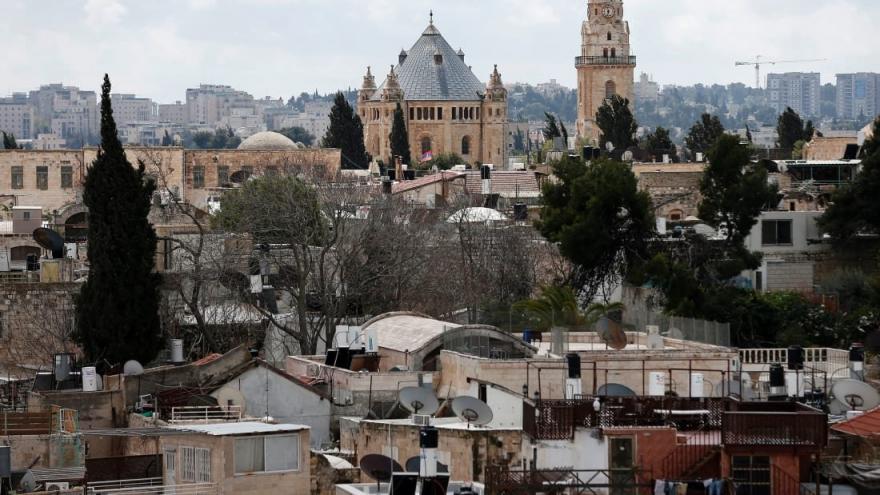 (CNN) -- Archaeologists excavating on Mount Zion in Jerusalem have uncovered evidence of the Babylonian conquest of the city, appearing to confirm a Biblical account of its destruction.

Academics from the University of North Carolina at Charlotte made significant finds, including ash deposits, arrowheads and broken pieces of pots and lamps. The most surprising discovery, however, was an item of jewelry, which appears to be a tassel or earring with a bell-shaped upper portion, the researchers said.

Shimon Gibson, co-director of the university's Mount Zion archaeological project, told CNN that the recovery of the rare piece of jewelry is the first time that archaeologists have uncovered signs of the "elites," appearing to confirm Biblical descriptions of Jerusalem's wealth prior to the conquest in 587-586 BC.

Gibson said jewelry is a rare find at conflict sites as warriors would normally loot it and melt it down. It is a "clear indication of the wealth of the inhabitants of the city at the time of the siege," he said.

The historian said that while the items in isolation do not provide conclusive evidence of the Babylonian attack, the unique mix of artifacts leads researchers to believe they have uncovered direct evidence of the conquest.

"For archaeologists, an ashen layer can mean a number of different things," Gibson said in a statement. "It could be ashy deposits removed from ovens; or it could be localized burning of garbage.

"However, in this case, the combination of an ashy layer full of artifacts, mixed with arrowheads, and a very special ornament indicates some kind of devastation and destruction. Nobody abandons golden jewelry and nobody has arrowheads in their domestic refuse."

The location of the artifacts meant researchers were able to rule out other explanations for the findings. "We know where the ancient fortification line ran, so we know we are within the city," Gibson said.

The team noted that the recovered arrowheads, known as Scythian arrowheads, are "fairly commonplace" in battle sites from the 7th and 6th centuries BCE, and were known to be used by Babylonian warriors.

"This evidence points to the historical conquest of the city by Babylon because the only major destruction we have in Jerusalem for this period is the conquest of 587/586 BCE," Gibson said.

He added that the clay artifacts -- which include broken pieces of pottery, portions of the period's typical high-based pinched lamps, and other household objects -- further helped the team to date the discoveries. "It's the kind of jumble that you would expect to find in a ruined household following a raid or battle," he said.

"It is very exciting to be able to excavate the material signature of any given historical event, and even more so regarding an important historical event such as the Babylonian siege of Jerusalem," said Rafi Lewis, a co-director on the project.

The findings are of particular significance as they shed light on a defining event in Jewish history.

The conquest, led by the Neo-Babylonian King Nebuchadnezzar II, is believed to have resulted in a significant loss of life when the city was razed to the ground. It also led to the destruction of King Solomon's Temple -- a story recounted in the Old Testament's Second Book of Kings.

Orthodox Jews around the world commemorate the event every year on Tisha B'Av, an annual day of fasting and mourning, which this year took place on Sunday. The day, which is regarded as the saddest in the Jewish calendar, also marks the destruction of the Second Temple by Roman legions around 70 AD.