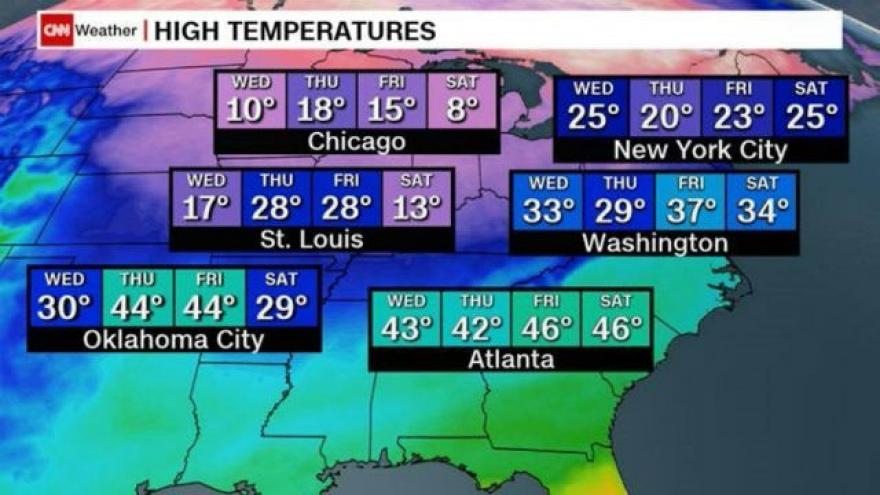 The eastern United States and the Midwest are being clobbered with a brutal cold front that will stretch through the week and probably make New Year\'s Eve a frigid affair in many cities. Photo courtesy CNN

(CNN) -- Blasts of Arctic air have brought weather-related deaths, record low temperatures and historic amounts of snowfall to parts of the United States.

In Kansas on Tuesday, four people died in a car crash attributed to icy roads. Erie, Pennsylvania, is under 65.1 inches of snow. International Falls, Minnesota, set a record low of minus 36 degrees Fahrenheit on Wednesday morning, breaking the 1924 record of minus 32 degrees.

"When the city known for being the nation's cold spot breaks a record like that, you know it's cold," CNN meteorologist Brandon Miller said.

At least the cold brought out the ice fishermen in Minnesota.

Doug Easthouse of the state Department of Natural Resources said hundreds of anglers spent the day standing on ice-covered Upper Red Lake in hopes of catching their limit of walleye. One fisherman said his line kept freezing onto the ice, despite a heater inside his fishing shack, Easthouse said.

Temperatures will be 10 degrees cooler than usual, except in California, the Southwest, South Texas and South Florida, Miller said.

"The core of the coldest air is shifting from the Midwest to the Northeast today and it will be one of the coldest endings of the year for many," in the region, he said. Arctic air coming through Canada at the end of the week will make New Year's Eve more chilly than usual.

The National Weather Service has issued extreme-cold advisories in parts of the Northeast, Midwest, West and New England -- warning people to keep as much skin covered as possible to protect from frostbite.

Frostbite is a danger to exposed skin within 30 minutes of being in the elements, the weather service said. Wind chills can lead to hypothermia.

Law enforcement agencies are warning people to watch for icy conditions even if the roads appear clear. The Kansas car wreck that killed four females, a 47-year-old mother, a 20-year-old woman and two teenagers happened on a raised bridge in Dickinson County, which is in the north-central part of the state, Kansas highway Patrol Trooper Ben Gardner said. The vehicle hit the bridge guardrail and went over it, falling 25 feet onto its top, the report said.