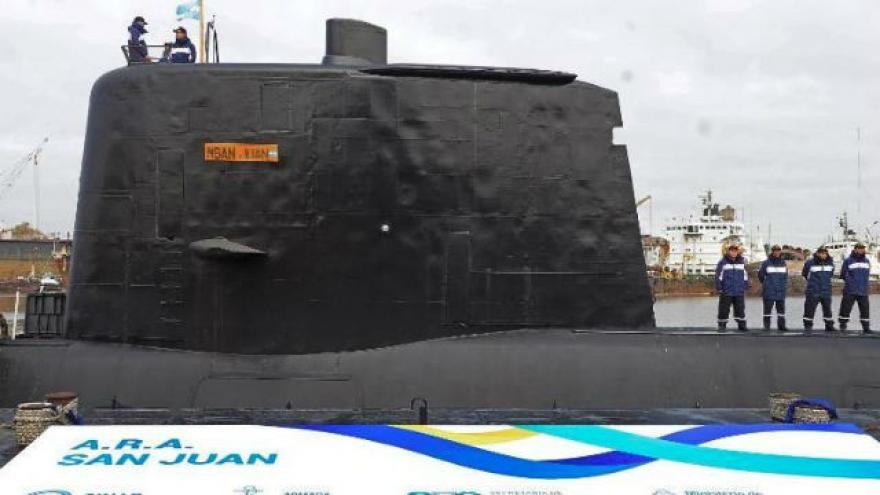 (CNN) -- A missing Argentine naval submarine has been found, a year and a day after it vanished in the South Atlantic with 44 crew members on board, authorities said Saturday.

The wreckage of the ARA San Juan, which "suffered an implosion," was found about 870 meters (2,850 feet) down on the ocean floor, Argentine naval Capt. Gabriel Attis later told reporters in Buenos Aires.

Family members at the navy headquarters were shown three images of the remains of the San Juan's "sail," or tower, and bow sections.

Hours before the wreckage was positively identified, the Argentine navy tweeted an image of a point of interest on the seabed, suggesting that a 60-meter-long object might be the missing vessel. An American company contracted by Argentina located the submarine.

Footage showed relatives of the lost crew members grieving in the northern port of Mar del Plata, the submarine's home base, as they received the news the submarine had been found. The vessel's condition remains unclear.

Defense Minister Oscar Aguad told reporters at a press conference Saturday that Argentina does not have the capability of recovering the sunken submarine.

"No, we don't have the means to go down to that depth of the sea," he said, adding that authorities "do not have the equipment to bring the submarine out from such a depth."

The ARA San Juan disappeared November 15 last year off Argentina's coast, about midway on its journey from Ushuaia in the country's south to Mar del Plata.

The Argentine navy said in the following days that the vessel's captain had reported a short circuit in the vessel's battery system shortly before the last known contact. The short circuit was caused by seawater entering the vessel's "snorkel," a tube that reaches the surface to refresh the vessel's air and recharge the batteries, the captain said in a call to his commander on land.

Days later, it emerged that a sound consistent with an explosion had been detected in the ocean near the sub's last known location by the United States and an international nuclear weapons monitor.

The hunt for the vessel -- which at its height involved 28 ships and nine airplanes from 11 nations, including the United States and United Kingdom -- centered on an area roughly 900 kilometers (559 miles) off the Argentine coast.

Relatives of crew members prayed for their return in Mar del Plata even as hopes dwindled that the diesel-powered submarine would be found before the air supply ran out.

The Argentine navy called off its rescue operation about two weeks after the sub's disappearance, saying there was "no chance of survival" for its crew, but search efforts continued.

Ocean Infinity, a US company specializing in deep water search and recovery, began looking for the ARA San Juan in September, using autonomous underwater vehicles operated by a team on board its ship Seabed Constructor, the firm said. The same ship was previously involved in the search for missing Malaysia Airlines Flight 370.

Three Argentine navy officers and four family members of the crew of the ARA San Juan were invited on board as observers for the search mission, Ocean Infinity said.

Oliver Plunkett, Ocean Infinity's CEO, said in a statement he hoped the discovery of the submarine would lead to "questions being answered and lessons learned" that would prevent a similar incident in the future.

Ocean Infinity told CNN on Saturday its search vessel is still conducting an analysis of the debris field found around the wreck. The company confirmed it has the ability to salvage remains of the submarine should the Argentines ask.

"Next steps are a matter for the authorities to determine," Plunkett said. "We would be pleased to assist with a recovery operation, but at the moment, we are focused on completing imaging of the debris field."

The vessel's loss raised questions over the navy's maintenance of its submarine fleet.

The ARA San Juan was an old diesel submarine, built in Germany in the mid-1980s but was refitted with new engines and batteries around five years before its disappearance, Peter Layton, a visiting fellow at the Griffith Asia Institute at Griffith University in Australia, told CNN last year.

The sub was designed to have a shelf life of around 30 years, which had expired, he said. If intact after the explosion, the hull could have been expected to withstand ocean depths up to around 500 to 600 meters, he said. Below that, it would buckle under pressure.