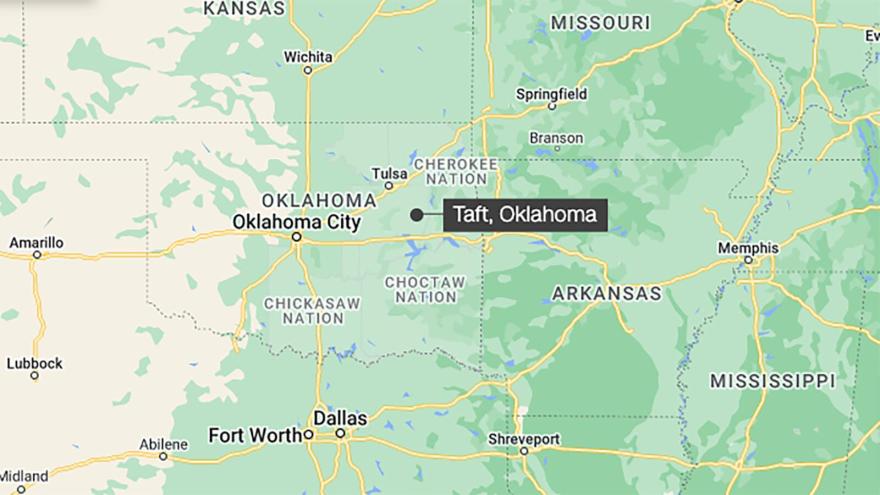 One person is dead and seven are wounded, including two juveniles, after a shooting early Sunday at an outdoor Memorial Day festival in Taft, Oklahoma, officials said.

(CNN) -- A 39-year-old woman died and seven other people were wounded, including a 9-year-old child, after a shooting early Sunday at an outdoor Memorial Day festival in Taft, Oklahoma, officials said.

The shooting took place shortly after midnight when festival goers got into an argument and gunfire followed, according to the state's Bureau of Investigations (OSBI).

A suspect in the shooting turned himself in to the Muskogee County Sheriff's Office Sunday afternoon, the OSBI said in a news release. Charges against the suspect have not yet been announced.

Law enforcement was present at the festival and provided initial aid to the victims, according to an OSBI statement.

The injured range in ages from 9 to 56 years old, according to the OSBI. The agency earlier said two juveniles were wounded, but later corrected the number to one.

All are said to have non-life-threatening injuries, according to the OSBI.

Some 1,500 people were in attendance at the annual Memorial Day event in Taft, southeast of Tulsa.

Recent mass shootings -- including at an elementary school in Uvalde, Texas, last week and one earlier in May at a supermarket in Buffalo, New York -- have people around the country on edge.

A "sound disturbance" Sunday at an indoor arena in Brooklyn, New York, sent people running for their lives who mistook the sound for gunfire, including tennis star Naomi Osaka.

Osaka said she was "petrified" when she saw the commotion.

"I was just in the Barclays center and suddenly I heard shouting and saw people running, then we were being yelled at that there was an active shooter and we had to huddle in a room and close the doors," Osaka said on Twitter.