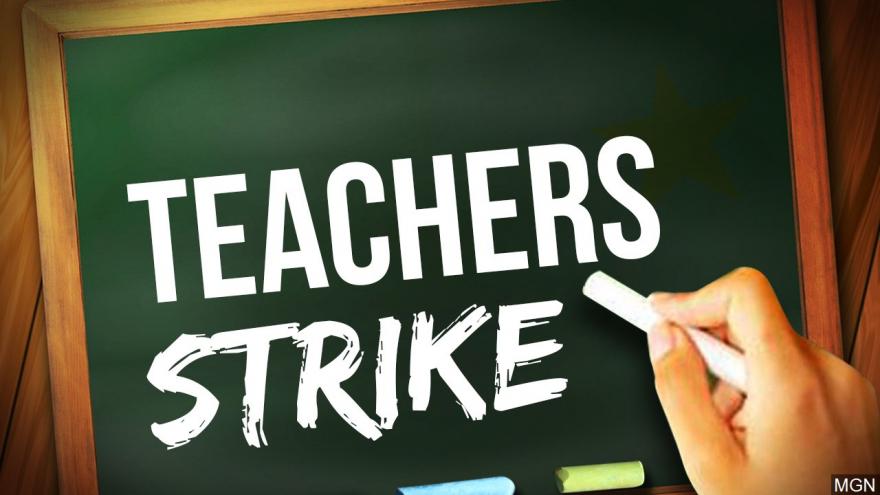 PHOENIX, Ariz. (AP) — Hundreds of thousands of Arizona schoolchildren returned to classes Friday, a day after state lawmakers approved a plan to hike teacher salaries to end a historic six-day walkout by educators that shuttered most schools statewide.

Teachers at a high school in the Phoenix suburb of Mesa lined up to greet students with cheers and handshakes. An elementary school principal greeted students with high-fives on the other side of metro Phoenix.

Educators returning to work at San Marcos Elementary in the suburb of Chandler traded in their red protest T-shirts for black and blue tops of their school colors. They hugged to start the day.

As students arrived, security staffer Jasmine Gutierrez embraced them, exclaiming, "I missed you so much!"

In Jennifer Boettcher's first-grade class, students had a breakfast of muffins, milk and juice waiting.

"I'm so happy to see you, you all grew this much," Boettcher said while raising her hands.

Jolene Gallup, a media specialist and reading intervention teacher, was thrilled to come back. She said the teachers' #RedforEd movement was empowering but that the school is as close-knit as a family.

"The whole time you were down at the Capitol and seeing the signs and seeing the marching, your thoughts were with the kids in the classroom," she said.

The walkout was part of a national uprising over low teacher pay and funding. The movement started in West Virginia, where a strike resulted in a raise, and spread to Oklahoma, Kentucky and, most recently, Colorado.

Arizona organizers called for an end to the walkout Thursday after an all-night legislative session resulted in a state budget that adds hundreds of millions of dollars for public schools but didn't meet all of teachers' demands. Most districts planned to reopen Friday, but Tucson's largest district said it would resume classes next week because it would take time to ensure all 86 schools would be up and running.

Districts that closed for the whole six-day walkout were considering whether they would have to tack on school days at the end of the year. Those in Scottsdale, Mesa and Tucson said no extensions would be necessary. Chandler's district said Friday that it was still verifying whether more days based on whether required educational hours could still be met.

The new budget includes the first phase of an education funding plan spearheaded by Gov. Doug Ducey that will give teachers a 9 percent raise in the fall and 5 percent in each of the next two years. Those increases, which are in addition to a 1 percent raise granted last year, will cost about $300 million for the coming year alone.

"It's definitely a start," said Gallup, the reading intervention teacher. "There's a lot of work left to be done, but it's a positive change which hasn't happened in education in a very long time in Arizona."

The new funding package also partially restores nearly $400 million in recession-era cuts, with a promise to make up the rest in five years. But it didn't give teachers everything they wanted.

Education cuts over the past decade have sliced deeply into Arizona's public schools. Teachers wanted a return to pre-recession funding levels, regular raises, competitive pay for support staff and a pledge not to adopt any tax cuts until per-pupil funding reaches the national average.

Now that the walkout is over, organizers have turned their focus to a campaign for a possible November ballot measure that would seek more education funding from an income tax increase on the wealthiest taxpayers. They also have encouraged teachers to vote for candidates who pledge to support school.

At Oakwood Elementary School in the Phoenix suburb of Peoria, Principal Shawn Duguid was dressed in a purple shirt — one of the school's colors. As he does every day, Duguid was in front of the campus gates before they opened to welcome the roughly 1,000 students in kindergarten through eighth grades.

Some parents came with boxes of doughnuts and other goodies for the faculty after the six-day absence.

Other parents, however, were still upset about the effect of teacher walkouts. Charlene Schafer, who was dropping off her two sons, said she is "pretty ticked off."

"They should have been in school. They were by themselves at home," she said.

For 14-year-old Sariah Stone, finding motivation to get out of bed after six days off and no homework wasn't the easiest.

"I thought I was on summer vacation," the eighth-grader said.

Still, she is happy to be back. She missed "just being here, the daily routine. It just felt weird not coming back."