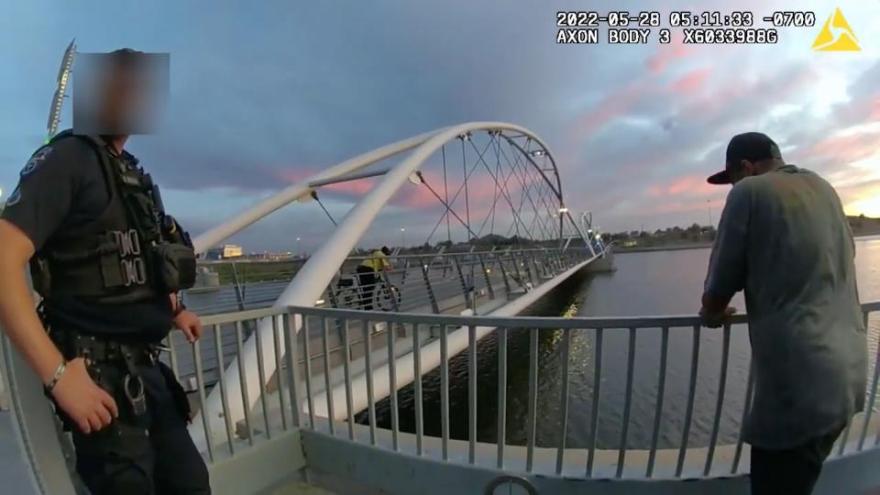 State and local agencies will investigate the death of a man in Tempe, Arizona, who drowned after police officers responding to a disturbance call did not enter the water to reach the man, city and state officials announced on June 6.

(CNN) -- State and local agencies will investigate the death of a man in Tempe, Arizona, last month who drowned after police officers responding to a disturbance call did not enter the water to reach the man, city and state officials announced Monday.

In the early morning hours of May 28, Tempe Police officers found Sean Bickings, 34, and a woman at a reservoir near the city's Elmore Pedestrian Bridge, according to a statement from the city of Tempe.

The officers were responding to a call about "an alleged fight" between Bickings, who the city described as "unsheltered," and his companion. The statement said both Bickings and his partner denied any physical violence had occurred, and neither of them were under arrest.

Officers were questioning Bickings and running his name through a database to determine if he had any outstanding warrants, the city said in a statement.

"That check had not yet been completed when Bickings decided to slowly climb over a 4-foot metal fence and enter the water," the statement said.

"He swam about 30-40 yards before repeatedly indicating he was in distress. He soon went under and did not resurface," the statement continued.

The Tempe Officers Association, the union that represents Tempe Police Department officers, said in a statement emailed to CNN that officers do not receive training in water rescues and do not have the equipment to help people at risk of drowning.

"Attempting such a high-risk rescue could easily result in the death of the person in the water and the officer, who could be pulled down by a struggling adult. Officers are trained to call the Fire Department and or get the Tempe Police boat. That is what officers did here," the statement said.

The three officers who initially responded to the call have been placed on non-disciplinary paid administrative leave pending the investigation, according to the city.

Separately, the city said it has asked the nearby Scottsdale Police Department to conduct an administrative review of the "critical incident response" in an effort to maintain "public trust and transparency." That investigation is also expected to take several weeks. Scottsdale Police said its Internal Affairs investigators will review the responding officers' actions in relation to Tempe Police policies and training.

CNN has attempted to reach out to Bickings' family for comment.

The city released partial body camera footage of the incident from one officer, as well as what it says is a transcript of all conversations from the footage that was not released. The remaining footage from the body cameras of all three officers will be released later this week, the city said, adding it "will be edited due to its graphic, sensitive nature."

In the body camera footage, Bickings can be seen sitting on a bench and speaking to police as they stand behind him. Bickings later climbs over the metal fence and enters the reservoir.

At that point, police can be heard telling Bickings, "You're not allowed to swim in the lake," however Bickings continues to get into the water.

The nearly 12-minute video, which also shows what happened between the couple and Tempe police officers, ends before he starts calling for help.

In its statement, the police union said the exchange was "largely cordial prior to Mr. Bickings entering the lake."

"He was free to go at any time," the union statement said. "To watch the 11-minute video leading up to Mr. Bickings' entering Tempe Town Lake and to understand how this 911 call ended is to see an awful loss of life. Our grief mirrors our community's grief. No one wanted this incident to end as it did."

The city said it is reviewing water response protocols with Tempe Police and assessing equipment needs for officers and the need for placement of rescue equipment around bodies of water.