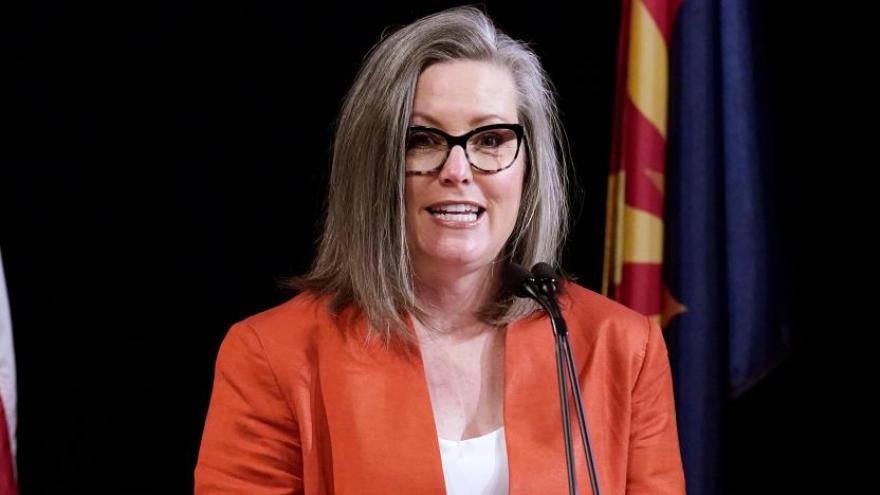 Arizona Secretary of State Katie Hobbs is receiving protection from the Arizona Department of Public Safety after fielding multiple death threats amid the election audit in Maricopa County. Hobbs is shown Monday, Dec. 14, 2020, in Phoenix.

(CNN) -- Arizona Secretary of State Katie Hobbs is receiving protection from the Arizona Department of Public Safety after fielding multiple death threats amid the election audit in Maricopa County.

Hobbs has been a vocal opponent of the audit, which was demanded by Republican state senators and is being overseen by a purveyor of election conspiracies. The audit kicked off last month even though county election officials had conducted two previous audits and found no evidence of widespread fraud or other issues.

"The death threats are pouring in," Hobbs' press secretary, C. Murphy Hebert, told CNN. Hobbs' office had made the request for a security detail to Gov. Doug Ducey's office on Thursday afternoon.

"People come from all over the country to work, raise families, and retire in Arizona. It's the best state in the union," Hobbs tweeted this week. "But this #fraudit is undermining confidence in our elections. It's making Arizona a national joke. It's bad for our brand, and bad for business."

Thursday's request for security was prompted by an incident involving a Gateway Pundit reporter who misidentified himself as a "YouTuber" and ran after Hobbs and her press staff, according to Hebert. Earlier that same day, the secretary's office had received a "very specific death threat asking about what she was wearing that day so she could be identified easily," Hebert told CNN.

"Let me be very clear: I will never be intimidated out of telling the truth, defending our elections, and serving the people of Arizona," Hobbs tweeted Friday.

The review is being overseen by a company whose chief executive supported former President Donald Trump and shared election conspiracy theories in since-deleted tweets. The audit's GOP organizers have ignored requests from election integrity groups to allow nonpartisan election administration experts to observe the process.

"This is not like any audit I've ever seen," Mark Lindeman, the acting co-director of Verified Voting, a nonpartisan organization focused on technology and election administration, previously told CNN. "If it intends to be perceived as fair-minded and credible, they've made some bad mistakes."

This is the second time in six months that Hobbs has received personal protection. The first time was immediately following the 2020 general election during the vote count in Maricopa County, and was lifted after President Joe Biden's inauguration.