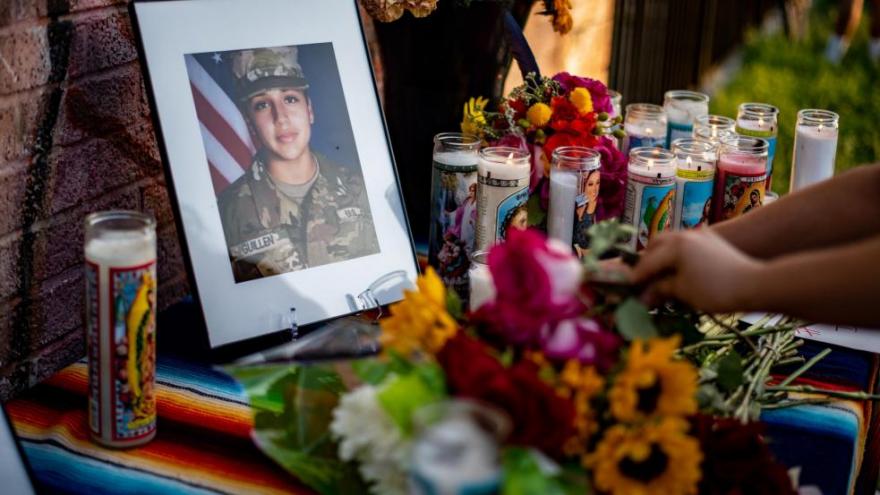 The US Army has announced a new investigation into leadership decisions at Fort Hood related to the death of Specialist Vanessa Guillen and decided that a top general overseeing operations there will remain at the base in Texas instead of moving to a new role while the investigation proceeds.

(CNN) -- The US Army has announced a new investigation into leadership decisions at Fort Hood related to the death of Specialist Vanessa Guillen and decided that a top general overseeing operations there will remain at the base in Texas instead of moving to a new role while the investigation proceeds.

Gen. John Murray, currently the commanding general of Army Futures Command, will "lead an in-depth investigation into the chain of command actions related to Spc. Vanessa Guillen," according to an Army statement on Tuesday.

"Maj. Gen. Scott Efflandt will continue to serve as the deputy commanding general for support and will remain at Fort Hood to assist with the reintegration of III Corps as they return from their mission supporting Operation Inherent Resolve," the statement added.

"With Maj. Gen. Efflandt remaining at Fort Hood, the Army will announce the name of a new commander for the 1st Armored Division, which Efflandt had previously been designated to lead," it added, saying that the announcement is expected in the coming days.

The death of the 20-year-old Guillen, whose remains were discovered in June, months after her disappearance, has sparked a series of reviews into the environment at the massive Army base which houses 36,500 soldiers.

The main suspect in her disappearance -- another Fort Hood soldier -- killed himself when he was confronted by investigators, according to the Army's Criminal Investigation Division.

Guillen's mother, Gloria, and other relatives tearfully pleaded with President Donald Trump for justice during an Oval Office meeting in July.

In a statement to CNN in late July, Fort Hood officials told CNN there have been 23 deaths this year at the base. According to the officials, the deaths include seven off-duty accidents; seven suicides; one combat-related death; four homicides, one of which was on the base; two of natural causes; one that was undetermined pending an autopsy; and one drowning.

"There are currently several investigations underway at Fort Hood which are tasked with reviewing a wide range of topics and concerns. Gen. Murray will roll those efforts into a more complete and comprehensive investigation that will delve into all activities and levels of leadership," the statement said, adding that Murray's formal investigation "is separate from the Independent Review of Fort Hood, which began in August."

"This is a comprehensive look at all of the actions taken at every echelon of the command related to Vanessa Guillen," Secretary of the Army Ryan McCarthy told reporters Tuesday.

The new investigation "will look at all the actions of the command from the lowest level to the senior level at the post," Army Chief of Staff Gen. James McConville said.

McCarthy said the new investigation was sparked in part by an increase in incidents at Fort Hood.

"If you look at the numbers this year on the installation for felonious crimes, sexual harassment, sexual assault, the numbers are high, very high this year. And so the trends coupled with that survey, we needed to get a much more comprehensive look about the challenges that Fort Hood is experiencing," he said.

"We need to understand the root causes so that we can make the appropriate changes, whether that's a leadership issue, resources, conditions on the ground, our systems. The numbers are bad and we need to make some adjustments because we're very concerned," McCarthy added.

The Army announced that Maj. Gen. John B. Richardson IV will formally assume duties as deputy commanding general for operations of III Corps and acting senior commander of Fort Hood on Wednesday. His appointment had been previously announced.