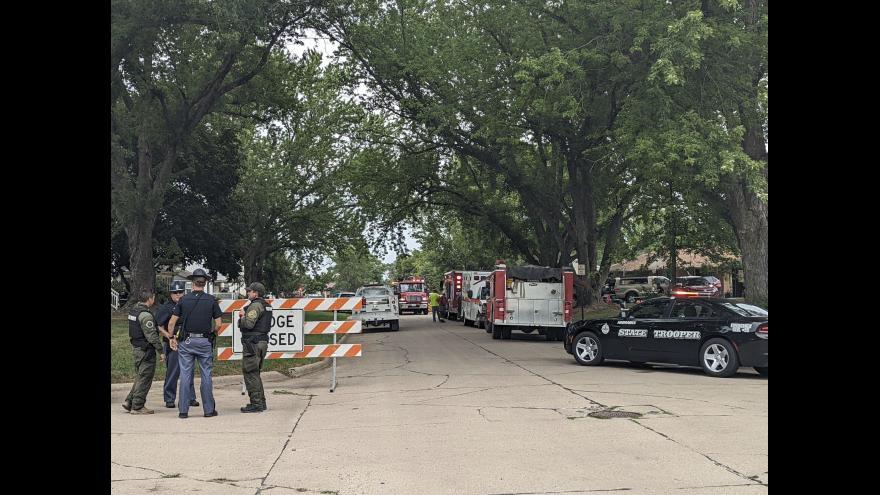 Barricades block off a portion of Elm Street in Laurel, Nebraska, where four people were found dead on August 4.

(CNN) -- The suspect in a quadruple homicide in which the victims were found dead in two separate house fires has been hospitalized with burns over much of his body and lived across the street from one of the blazes, police in Nebraska said Friday.

According to court documents obtained by CNN affiliate KTIV, a gas station receipt left in a backpack at one of the murder scenes led authorities to Jason A. Jones, 42. He was taken into custody early Friday, Nebraska State Police Col. John Bolduc said.

Jones had serious burns and was airlifted to a hospital in Lincoln, Bolduc said.

It could not immediately be determined whether he had legal representation.

Crime scene investigators obtained physical evidence at the two fire scenes that pointed to a suspect who lived right across the street from one of the fires. Bolduc credited firefighters for putting out the fires while preserving the evidence of the crimes, which led police to the suspect.

Bolduc said it was premature to talk about motive.

"I want to acknowledge the indescribable grief that this community is experiencing right now. And that's going to be compounded by the betrayal of trust that they're going to feel because a community member here is alleged to have committed these crimes," Bolduc said.

According to the affidavit and application for the issuance of an arrest warrant, a black backpack was located inside a home on 209 Elm Street where an explosion was reported, and a woman "who appears to have suffered two gunshot wounds" was found unresponsive and later pronounced dead on the scene.

"Upon execution of the search warrant, located in the kitchen was a black backpack," the document read. "In the black backpack was several receipts."

One receipt dated August 3 led investigators to a gas station where Jones allegedly used a credit card to purchase a 6-gallon auto shutoff gas, a fuel tank, and a camping backpack, according to the document.

In the second home on 503 Elm Street, where three individuals were found deceased with gunshot wounds, a "Molotov cocktail was found indicating the fire to have been intentional." When executing a search warrant in that home, authorities found a pistol that was traced showing it was purchased by Jason Alan Jones of "206 Elm Street."

The four victims have been identified as a family of three adults, 85-year-old Janet Twiford, 86-year-old Gene Twiford, and 55-year-old Dana Twiford; and the woman who was found in the first house, 53-year-old Michele Ebeling.

James Roberts, who has owned Laurel's Hometown Market for more than a year, said that news of the deaths had shocked the small town. Laurel has a population of around 1,000 people and is located in Cedar County in the northeast of the state.

"Stuff like this doesn't happen in this town," Roberts said. "Everybody here knows everybody."

He said the grocery store has delivered food to the state troopers and firefighters who responded to the scene and are stationed at a nearby church. Staff packed up hamburgers and sandwiches including sloppy joes in addition to some water to show their support.

"It's a tight-knit town," Roberts said. "Everybody here is family."