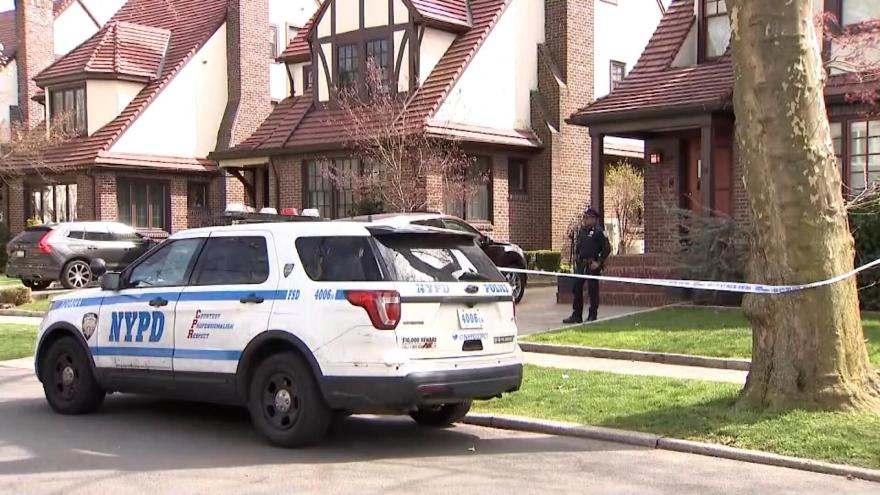 Police investigated at the Queens home of a 51-year-old woman whose body was found a half-mile away in a duffel bag.

(CNN) -- A 44-year-old man was arrested Thursday in the death of 51-year-old Orsolya Gaal, who was found over the weekend inside a duffel bag in Queens, the New York City Police Department said.

David Bonola faces charges of second-degree murder, first-degree criminal tampering and fourth-degree criminal possession of a weapon, NYPD Chief of Detectives James Essig said in a news conference. He is expected to be arraigned later Thursday.

Bonola made a confession to police after he was arrested, a law enforcement official previously said. In Thursday's news conference, Essig said Bonola had made "incriminating statements."

The investigation remains ongoing, and there are no outstanding suspects, Essig said.

Based on the preliminary investigation, authorities believe Gaal and Bonola, a handyman employed by her family, had an intimate relationship, police said at the news conference. The relationship had been "on and off" for about two years, police said, and was "considered at an end" when Gaal was killed early Saturday morning.

Investigators have determined Gaal attended a show Friday night and returned to her home in the Forest Hills neighborhood around 12:20 a.m. Saturday, Essig told reporters.

Bonola arrived at the home soon after, Essig said. He was either let inside the home or used a spare key.

An argument followed, ending in a violent confrontation in the basement of the home where Essig said Bonola allegedly stabbed Gaal "ruthlessly and brutally in excess of 55 times," killing her.

Afterwards, Bonola allegedly placed Gaal's body in a hockey bag and "as video showed, was seen rolling the body down the sidewalks, leaving a bloody trail through the streets of Forest Hills."

Her body was discovered inside a bag by a member of the public just before 8 a.m. Saturday, Essig said.

Police had been called about a suspicious bloody bag at the corner of Metropolitan Avenue and Jackie Robinson Parkway, the NYPD previously said. There, officers found a woman unconscious and unresponsive inside a duffel bag, and emergency responders pronounced her dead.

A trail of blood led to 72-24 Juno Street, the NYPD said, about a half-mile walk northwest of where the bag was found. The woman was identified as Gaal, who lived at the Juno Street home, police said.

Gaal's cause of death was determined to be sharp force injuries to the neck, and her manner of death was homicide, according to the New York Medical Examiner's Office.

Investigators recovered the jacket they believe Bonola wore when Gaal was killed, Essig said Thursday. They also found boots, a T-shirt and bloody bandages at a separate location. Bonola was treated for wounds to both hands at a local hospital later Saturday, Essig said.

Police also recovered the knife they believe was used to kill Gaal. According to Deputy Chief Commanding Officer of Queens North Julie Morrill, the knife was consistent with other knives found in the home.

Police were canvassing for video Wednesday night when they recognized Bonola, Essig told reporters. He voluntarily went with police to the 112th Precinct, where he allegedly made the "incriminating statements."

Once at the precinct, the suspect denied he was involved, before eventually admitting that he was the one who killed her, a law enforcement official told CNN. When officials from the Queens District Attorney's office arrived and also questioned him, he once again confessed to the killing, the official said.

Bonola was known to do repair work around Gaal's house, most notably on the air conditioner, servicing it many times, the official said. The suspect lived alone, but is believed to be separated from his wife and has children.