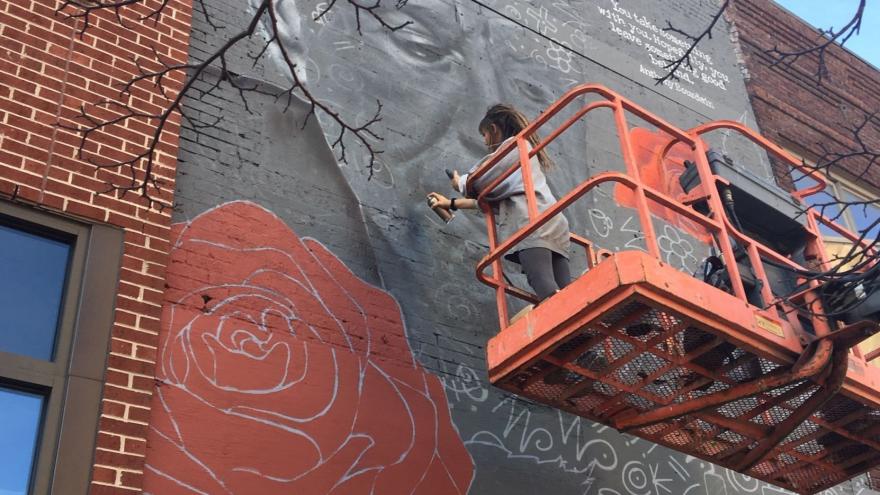 It features a larger-than-life figure with a down-to-earth personality.

The late Anthony Bourdain was a celebrity chef, a TV host, and an inspiration to many.

Krystal Cooke is the artist behind the mural. She’s not only new to the Flint area, but also to the art of spray painting.

“I just picked up spray painting about two and half months ago and I got inspired by watching all of these murals going on around downtown,” Cooke said.

The massive mural is actually Cooke’s second one at the Loft, a local bar in Flint.

The mural is a little over halfway done and Cooke said she still has a few days left on it.

“I’m actually surprising myself. I didn’t think I would be this far at this point. So I’m pleasantly surprised,” Cooke said.

Rodney Ott is the owner of the Loft. He is the one who asked Cooke to paint the mural of his idol and he funded the entire project himself.

“I just want to leave something good behind when I leave,” Ott said.

He said the quote written on the wall is what inspired him to have the mural done in the first place.

“That’s a positive thing, not only for Flint, but downtown Flint. And just in general, you want to beautify your city in any way you can,” Ott said.

He said another reason is to help bring awareness to suicide and mental illness after Bourdain died of suicide last year.

“Bring awareness for people that maybe need somebody to reach out too and hopefully, in his death that he can hit home to a lot of people that have had rough times and realize that there is help to get out there,” Ott said.