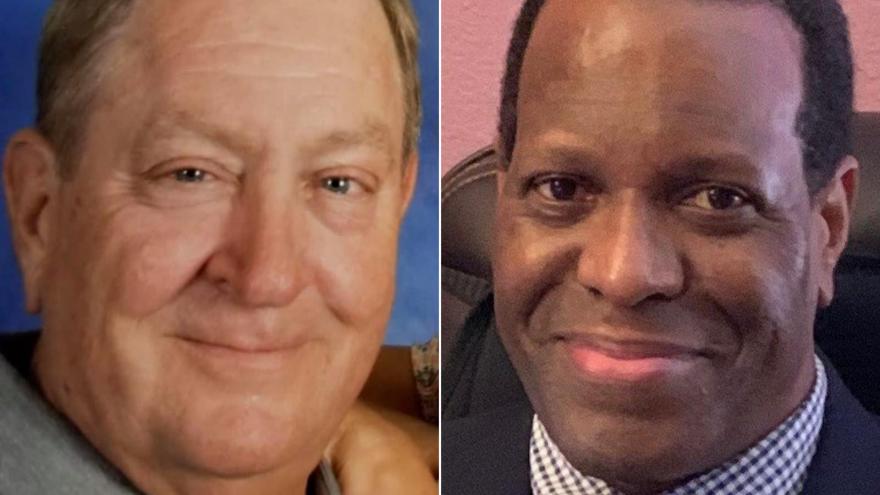 Richard White, 67, from River Oaks, and Anton Wallace, 64, from Ft. Worth were identified as the victims of the church shooting.

(CNN) -- As two families prepare to bury their loved ones killed in a Texas church shooting, the minister of that church is asking for continued prayers as well as forgiveness.

Britt Farmer, senior minister of West Freeway Church of Christ, spoke to reporters Monday night to express his grief for those they have lost and gratitude for those who have reached out in the wake of the deadly shooting.

The victims were identified as Anton "Tony" Wallace, 64, of Fort Worth, and Richard White, 67, of River Oaks, in a statement released by the Texas Department of Public Safety Monday.

"I lost two great men, friends. Men that I consider putting above myself, who did the same for me," Farmer said. "We ask for your continued prayers for the White family, for the Wallace family and for us as a spiritual family."

Gunman Keith Thomas Kinnunen, 43, shot and killed two parishioners before being taken down by church security Sunday morning in White Settlement, Texas, about 10 miles west of Fort Worth.

Wallace was a deacon and longtime congregant of the church, Wallace's daughter, Sarah Wallace, told CNN.

"He always wanted us to be in the church, he was always my role model," the grieving daughter said. "We just say God wanted him more than we did. They couldn't handle his perfectness here."

Farmer called White his best friend during the media briefing, He was an active volunteer of the church's security team and "constantly put others first," a statement from the White family read. He leaves behind a wife, parents, two brothers, three children, and seven grandchildren, the statement said.

The congregation held a private worship service inside the sanctuary to pray for their fallen church members Monday night.

Afterwards, Farmer spoke about both victims, saying that their deaths were a tragedy and he wasn't prepared to take any questions from media until after they had both been buried.

"We want this community to know that we're strong, but we want to be strong for them and all those who come into our midst that we can wrap our arms of love around them," Farmer said.

Farmer also spoke about his previous interactions with the shooter. He said he has ministered to Kinnunen on more than one occasion.

"I had seen him. I had visited with him. I had given him food. I had offered him food at other occasions that he had been to our building," said Farmer.

Sonia Hernandez, a former family acquaintance of Keith Kinnunen, told CNN that "he had what some might call demons."

"The most traumatic thing was his younger brother passing away," she said, referring to Kinnunen's brother, Joel, who died by suicide in 2009.

During the press conference, Farmer also mentioned Kinnunen's family and asked that people keep them in their thoughts as well. "We also ask that you pray for the perpetrator's family and those who may have been affected by his loss," Farmer said. "Our hearts are not lost in that as well."