As FDA advisers recommend authorizing a 3rd vaccine, a Covid-19 surge hangs in the balance 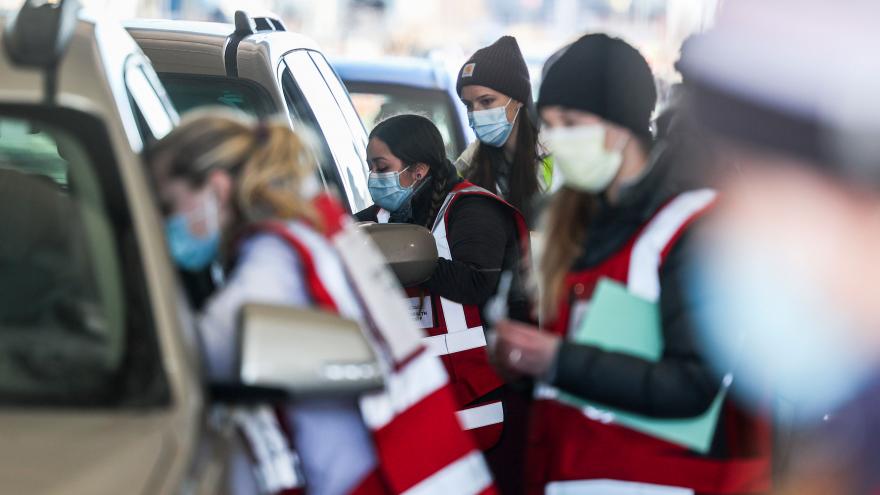 UCHealth healthcare workers talk to patients at a tent outside Coors Field as they receive their second dose of a Covid-19 vaccine on February 20. - Michael Ciaglo/Getty Images

(CNN) -- Even with a third vaccine nearing authorization and a rise in vaccination rates, officials say another devastating Covid-19 spike could be on the horizon depending on what the United States does next.

"The question that hangs in the balance right now is, will we have a fourth surge?" Dr. Tom Frieden, the former director of the US Centers for Disease Control and Prevention, told CNN's Wolf Blitzer on Thursday. "Every uncontrolled spread increases the risk that there will be dangerous variants that can be more infectious, more deadly, or can escape from immune protection."

A US Food and Drug Administration committee on Friday recommended that Johnson & Johnson's single-dose Covid-19 vaccine be authorized for emergency use. The FDA is expected to act on the recommendation quickly, meaning the vaccine may be available early next week.

That's as the number of reported vaccinations reported by the US Centers for Disease Control Friday was almost 2.2 million more than reported a day earlier. The seven-day average of vaccinations reported was about 1.6 million Friday. Now, 14.2% of the total US population has received at least one dose, according to the CDC.

"The agency has also notified our federal partners involved in vaccine allocation and distribution so they can execute their plans for timely vaccine distribution," according to the statement.

Andy Slavitt, a senior adviser to the Covid-19 response coordinator at the White House, said in a Twitter post that he expects the FDA to make its decision on emergency use authorization Saturday. "A third safe and effective vaccine is very welcome news," Slavitt tweeted.

If the FDA grants the vaccine emergency use authorization as expected, CDC advisers are due to meet Sunday to recommend to CDC Director Dr. Rochelle Walensky whether people could actually get the vaccine. Walensky would then give the final go-ahead. President Joe Biden has said if the vaccine is approved, it will be rolled out immediately.

New cases and hospitalizations have started to plateau

The number of new cases has started to plateau after six straight weeks of decline, though. Although the fall has come alongside an increase in the administration of vaccines, experts say that they are not the only cause for the lowered numbers.

"Over the last few weeks, cases and hospital admissions in the United States have been coming down since early January and deaths had been declining in the past week," Walensky said at the White House. "But the latest data suggest that these declines may be stalling, potentially leveling off at still a very high number. We at CDC consider this a very concerning shift in the trajectory."

The most recent seven-day average of cases -- about 66,350 -- is higher than the average reported on Wednesday, Walensky said, adding, "It is important to remember where we are in the pandemic. Things are tenuous."

Dr. Anthony Fauci, chief medical adviser to President Joe Biden, said the United States "has to be careful" when it comes to the spread of disease.

"The point that Dr. Walensky made is critical," Fauci said. "If we plateau at 70,000, we are at that very precarious position that we were right before the fall surge, where anything that could perturb that could give us another surge."

The Johnson & Johnson vaccine is the only one of the three Covid-19 vaccines to get unanimous support from the FDA advisory committee.

"I think it's a relatively easy call. It clearly gets way over the bar and it's nice to have a single-dose vaccine," said committee member Dr. Eric Rubin after the vote. Rubin is editor-in-chief of the New England Journal of Medicine and a professor at Harvard University's T.H. Chan School of Public Health.

Some state governors are already reporting the number of doses of the new vaccine they expect to get next week if it is authorized.

Ohio Gov. Mike DeWine said his state anticipates getting 90,000 doses in addition to the 310,000 doses already allotted to Ohio for next week.

California expects to get 380,300 doses by next week, Gov. Gavin Newsom said, while New Jersey may get roughly 70,000 doses, according to Gov. Phil Murphy.

The vaccine is also easier to transport and store, since it can be kept in refrigerators and is less delicate than the vaccines from Pfizer/BioNTech and Moderna, which have to be stored at temperatures colder than that of a regular freezer.

The existing vaccine from Pfizer could also become easier to distribute quickly, thanks to the FDA agreeing Thursday to allowing it to be transported and stored for up to two weeks at "conventional temperatures" typically found in pharmaceutical freezers.

The company and its partner BioNTech are also responding to the growing threat of variants with new testing to see how well a third dose protects against them.

Despite caution about paying too much heed to the downward trends of the past few weeks, many states are loosening their restrictions.

By Monday, Wyoming barbershops and salons, including hair, nail and tattoo parlors, will no longer have capacity restrictions, Gov. Mark Gordon said in a statement. Over the next month, the state will also ease other health restrictions, including allowing buffets to resume operation and limiting gatherings to 50 people instead of 25.

In response to "sustained decrease in case counts," the city of New Orleans is also implementing changes. Beginning on Friday the city is increasing gathering-size limits to 75 people indoors and 150 outdoors, as well as raising table limits and increasing indoor and outdoor stadium capacity limits to 15% and 25%, respectively.

A particular point of contention has been the reopening of schools: While some officials and parents think the need to have students back in the classroom is urgent, there are teachers who worry it is too soon and not yet safe enough to open campuses.

As vaccine eligibility expands, more than half of all doses have gone to people 65 and older, including residents of long-term care facilities, according to an analysis by the Kaiser Family Foundation released Friday.

Overall, about 41% of people 65 and older in the US have received at least one dose of Covid-19 vaccine, about three times the overall rate of 14%.

In some states, coverage among older adults is even higher, the analysis found.

Twenty-one states and Washington, DC, report vaccination data for people 65 and older. Four of them of them report vaccinating a larger share of their older residents than the national average: North Carolina (49%), Florida (45%), Arizona (44%) and South Carolina (44%).

Starting March 15, teachers and other essential workers in Missouri will be eligible for the vaccine, Gov. Mike Parson said Thursday.

As well as educators and staff of K-12 students, Georgia Gov. Brian Kemp announced Thursday that adults with intellectual and developmental disabilities and their caregivers and parents of children with complex medical conditions will be eligible for vaccines on March 8.

And as of Thursday, all people who are older than 16 and have certain comorbidities are eligible for the vaccines in Utah, Gov. Spencer Cox said.

Some states are abandoning the tiers of eligibility and moving to a system based on age alone. In Maine, people 60 and older will be able to get vaccinated starting next week, Gov. Janet Mills said Friday. Each month, a younger group will be eligible.

In Connecticut, those 55 and older can get the vaccine starting Monday, Gov. Ned Lamont said earlier this week.