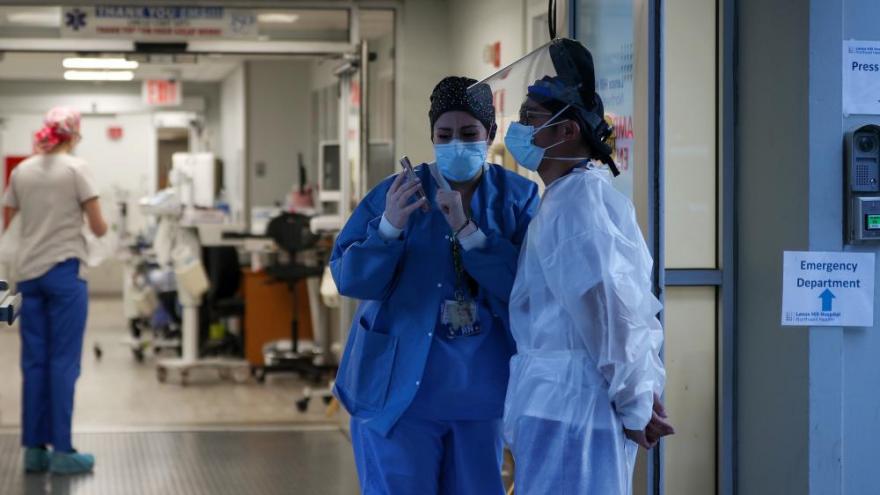 With encouraging signs that the US is nearing the peak of its coronavirus outbreak, at least 10 states have created coalitions to work together toward reopening their economies. But as they do, several other state leaders are taking a more measured approach, saying they fear the worst is yet to come for their parts of the country.

(CNN) -- The governor of California, the first state to put a coronavirus stay-at-home order in place, told his 40 million residents that the key to going back to work and play depends on six factors -- but it's still too early to tell how soon that will be.

"Science, not politics must be the guide," Gov. Gavin Newsom said, joining a growing number of states that are taking it upon themselves to figure out how to get back to normal. "We can't get ahead of ourselves .... I don't want to make a political decision. That puts people's lives at risk."

Newsom's remarks Tuesday come as the death toll from the coronavirus in the United States passed 25,000 -- according to Johns Hopkins University -- and as governors across the county discuss the options for reopening businesses and schools in their states.

The Trump administration has social distancing guidelines in effect through the end of the month. President Donald Trump said Tuesday it will be up to the governors when to reopen but he thought the federal government would give a date to them. Some states might open before April 30, he predicted.

California officials during this phase of the pandemic are looking toward means of Covid-19 suppression, herd immunity and, ultimately, a vaccine, but it will be "perhaps the most difficult and challenging phase of all," Newsom said.

The governor said that was saying a lot because the phase that has brought 734 deaths and new cases was very challenging.

Herd immunity is when so many people in the community have had the virus and become immune that it largely prevents further spread.

What needs to happen for order to be lifted

Newsom emphasized that reopening schools is the priority.

The governor said he doesn't envision any mass gatherings at sporting events or concerts until there is a vaccine and sufficient herd immunity.

The six things that need to happen before a stay-at-home order is lifted involve the state's ability to: expand testing and track the infected, protect vulnerable people, meet the needs of medical caregivers during the most trying times, to have drugs for treatment, to have businesses and schools comply with social distancing, and to be able to reinstate a stay-at-home order, if need be.

Newsom told reporters to check with him in two weeks to see whether he had a better idea on a timeline for reopening.

California is part of a compact with Oregon and Washington that is looking at how to reopen. The leaders in those three contiguous West Coast states and in seven Northeastern states said they would regionally plan an incremental release of stay-at-home orders.

Might be up to the counties, Montana governor says

Montana Gov. Steve Bullock said his state will look at the number of tests, the number of positives, where they are trending in the state, and whether they have the boots on the ground for contact tracing before it reopens.

His stay-at-home order runs through April 24.

In Montana, 36% of the state's first 377 cases were in one county, according to a report released Tuesday.

Bullock said officials may look at geographical data like that and the decision to reopen might fall to each county.

Trump earlier said each state is different and there are 29 that are in "good shape now." The President said some have fewer people and "lots of room."

Trump on Tuesday announced 200 business leaders will be part of "Great American Economic Revival Industry Groups," which will work with the White House on plans to reopen and revive the economy.

An influential model cited by the White House, meanwhile, predicts the pandemic could "peter out" in late spring, with deaths essentially stopping around 68,800 by the end of June. The model predicts the US may have seen peak daily deaths on Monday.

But the model from the Institute for Health Metrics and Evaluation at the University of Washington assumes nationwide social distancing through May, and experts are wary about the model's assumption that there will be no resurgence of the virus in the summer months.

Though US lawmakers have approved more than $2 trillion in stimulus, the International Monetary Fund said it expects the US economy to shrink by 5.9% this year -- the worst slump since 1946.

After an hour, police officers asked the group to disperse, saying too many people were there, too close together. Most left; one person was taken away in handcuffs after refusing to leave, WRAL reported.

South Dakota Gov. Kristi Noem announced Monday the state was working with Sanford Health to conduct a statewide hydroxychloroquine trial, which will include both patients who have tested positive for the virus and residents who have been exposed.

Patients who have been exposed to the virus will receive either hydroxychloroquine or a placebo, Sanford Health's chief medical officer Allison Suttle said.

"We're going on offense to help every single person deal with this virus and be willing to fight it and get better and go home to their families," the governor said.

The news comes as researchers in New York are expected to announce next week preliminary results of a study on hydroxychloroquine used on patients in that state -- offering one of the first scientific hints as to whether the drugs are helpful against coronavirus.