As R. Kelly trial approaches, prosecutors want to include alleged evidence of bribes and recordings of threats 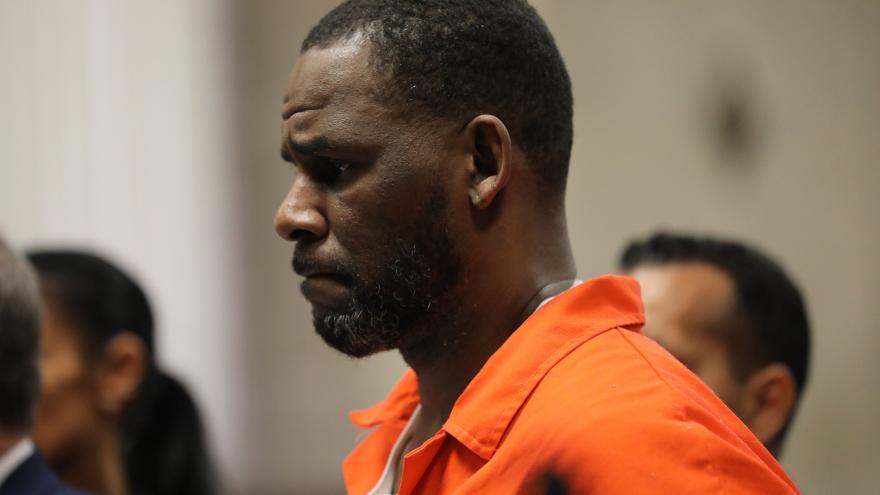 According to a court filing, with two weeks left until jury selection to begin in R. Kelly\'s federal racketeering trial, Brooklyn prosecutors are asking to admit additional evidence of alleged crimes that were not charged in their indictments of the singer. - Antonio Perez/Pool/Getty Images

(CNN) -- With two weeks left until jury selection is to begin in R. Kelly's federal racketeering trial, Brooklyn prosecutors are asking to admit additional evidence of alleged crimes that were not charged in their indictments of the singer, according to a Friday court filing.

The filing details testimony from a witness who alleges Kelly, whose full name is Robert Kelly, asked her to obtain child pornography involving boys for him. Further evidence includes recordings of physical abuse and threats that Kelly allegedly used to "maintain control over women and girls" who he had sexual relationships with, and evidence of bribes allegedly made on Kelly's behalf to state and county workers.

CNN has reached out to attorneys for Kelly for comment.

In Friday's filing, prosecutors ask the judge who is overseeing Kelly's August trial to allow the evidence related to these alleged crimes to be admitted as direct evidence of racketeering crimes, saying that many of the acts are "inextricably intertwined with the evidence of the charged crimes."

Additional acts alleged in the filing include multiple instances of sexual abuse against female minors, as well as the sexual abuse of a male minor, who prosecutors say Kelly met in 2006 at a McDonald's.

Many of the "uncharged acts" described in the filing have been publicly reported and are associated with other cases that Kelly faces in his Illinois state criminal case and his Northern District of Illinois federal case.

In the Brooklyn federal case, Kelly is facing charges of racketeering and sex trafficking, among others. He pleaded not guilty and jury selection is expected to begin on August 9.

Allegations of bribery and threats

One of the alleged bribes discussed in the filing involved paying a state worker $500 to create an ID card to make a 15-year-old girl identified only as "Jane Doe 1" appear to be 18 years old at the time of her wedding to Kelly in August 1994.

A source familiar with the matter confirmed to CNN that Jane Doe 1 is the late singer Aaliyah, who married Kelly that year. Prosecutors said in the filing that the marriage application, license and certificate all show the girl was 15 years old when she married Kelly on August 31, 1994.

CNN has reached out to Aaliyah's family for comment. The singer died in 2001.

Another alleged bribe detailed in the filing purportedly took place two-and-a-half decades later. Prosecutors said they have a recording of a February 2019 phone conversation between Kelly and a "crisis manager" that took place after the release of the docuseries "Surviving R. Kelly."

Prosecutors allege that in the recorded conversation, Kelly asks the manager to find out "what I should tip the bailiff." Prosecutors say later in the conversation the manager told Kelly he paid a clerk in Cook County, Illinois, $2,500 to obtain a "burner" telephone so the manager could obtain information about the singer's legal trouble.

"That's done ... you don't know nothing," prosecutors said the manager told Kelly on the call.

Prosecutors say, if permitted, one witness is expected to testify that Kelly directed her to obtain child pornography involving boys for him, and in their filing state that multiple videos were obtained from a device obtained during a search of Kelly's home that corroborate her testimony. However, their filing also states the government has been "unable to confirm the identity or ages of the individuals appearing in these videos."

Prosecutors are also asking to admit recordings that purportedly show physical abuse and threats of different women to show "the physical and psychological abuse Kelly employed to maintain control over women and girls with whom he was engaged in sexual relationships and Kelly's regular use of audio and video recordings to maintain control." One is a video recording that, prosecutors say, appears to have been taken by a camera mounted somewhere in a bedroom.

Prosecutors also ask for multiple victims to be able to testify under pseudonyms to protect their safety and well-being.