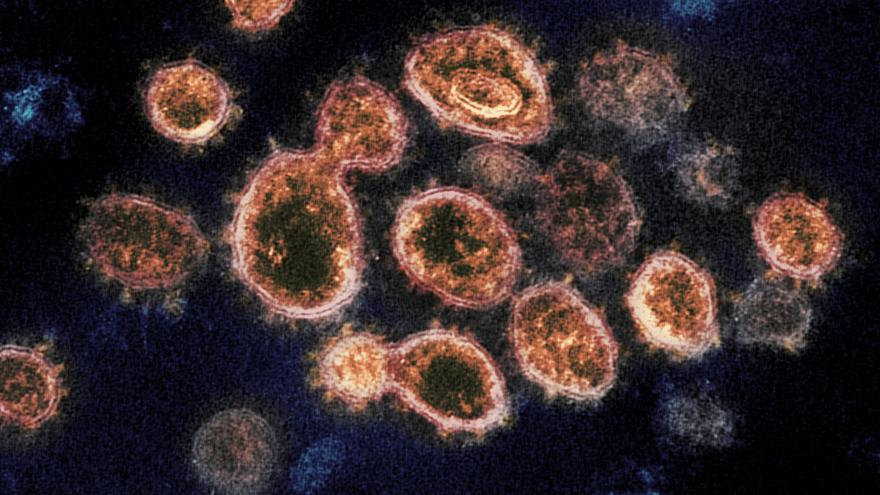 This image is provided by the National Institute of Allergy and Infectious Diseases - Rocky Mountain Laboratories from an electron micrscope and shows SARS-CoV-2 virus particles which cause Covid-19, isolated from a patient in the US. - NIAID

(CNN) -- As Covid-19 variants are increasingly found in the United States, experts say Johnson & Johnson's vaccine candidate would help in the pandemic fight, despite trial reports showing apparently lower efficacy rates than two vaccines already authorized in the US.

The vaccines already on the market in the US -- two-dose products from Pfizer and Moderna -- are about 95% effective overall against symptomatic Covid-19, with perhaps even higher efficacy against severe cases.

Johnson & Johnson said Friday it intends to apply next week to the US Food and Drug Administration for emergency use authorization, or EUA, for its vaccine candidate.

A member of the panel that will advise the FDA about its decision told CNN Friday that the Johnson & Johnson product would be quite useful, assuming the agency authorizes the vaccine.

"The Johnson & Johnson data, I think, are overall encouraging in that it can prevent you from being hospitalized and dying," said Dr. Paul Offit, a vaccine expert at the University of Pennsylvania and a member of the FDA's Vaccines and Related Biological Products Advisory Committee.

"And at a time when this virus is running wild in this country and we don't have enough (vaccines yet from Moderna and Pfizer), I think (the Johnson & Johnson candidate) is a good sign, assuming it gets EUA approval."

Offit has been vaccinated but said if he had not -- and if a Pfizer or Moderna vaccine were not available to him in reasonable period of time -- he would take a Johnson & Johnson vaccine, if it were available.

Another expert noted Johnson & Johnson's assertion that the vaccine's protection against severe disease increased over time, with no severe cases reported in the vaccinated group after day 49.

"Protection got better the farther you got out from the vaccination, and ... if we had followed this several more months," the efficacy could be even greater than reported, Dr. Michael Osterholm, director of the Center for Infectious Disease Research and Policy at the University of Minnesota, told CNN Friday.

Mathai Mammen, head of research and development at Janssen, Johnson & Johnson's vaccine division, said his company's vaccine and the two in use already in the United States "can't be compared head to head," because the virus was less widespread during the trials of the other two and there was "less pressure on the vaccine to protect."

"And there were none of these problematic variants that everyone's talking about now," Mammen told CNN Chief Medical Correspondent Dr. Sanjay Gupta.

He pointed to potential advantages of Johnson & Johnson's candidate: Unlike the Pfizer and Moderna vaccines, it would take only one shot; it does not have to be stored in freezers; and it can be stored for three months at refrigerator temperatures.

"For many clinics out there, this is going to be the ideal vaccine to have. One dose, stable vaccine -- use it," Osterholm said.

Johnson & Johnson already is testing a two-dose regimen of the vaccine, and that could increase the efficacy, Dr. Anthony Fauci said.

"Let's see what that shows ... Heck if you got (72%) with a single dose, you would think you would do pretty good with a boost," said Fauci, the director of the National Institute of Allergy and Infectious Diseases.

Model: Variants could add tens of thousands of US deaths by May

Johnson & Johnson's report came as more cases of highly contagious coronavirus variants are being found in the United States. On Thursday, South Carolina confirmed two cases of a variant of the virus first identified in South Africa.

The emergence of this and other variants, including one first identified in the United Kingdom and one in Brazil, is a "wake-up call," Fauci said at a White House news briefing Friday.

"We will continue to see the evolution of mutants ... we have to be nimble in order to adjust readily to make versions of the vaccine that are actually specifically directed to whatever mutation is actually present at any given time," Fauci said.

To stop the spread of variants, we should be treating each case of coronavirus as if it is one and take action to stop it from infecting others, said Dr. Rochelle Walensky, director of the Centers for Disease Control and Prevention.

"By the time someone has symptoms, gets a test, has a positive result and we get the sequence, our opportunity for doing real case control and contact tracing is largely gone," Walensky said Friday at a news briefing. "So I think and I believe that we should be treating every case as if it's a variant during this pandemic right now."

The concerning thing about the South Carolina cases is that the people didn't know each other, were not in contact with each other and were not traveling, Walensky said on ABC's "Good Morning America."

The variants are likely to worsen the spread of coronavirus across the US and add to the death toll, the Institute for Health Metrics and Evaluation at the University of Washington forecast Thursday.

"We have not been seeing governments taking action to apply cautionary measures as quickly as expected, and have incorporated that information into the modeling," Murray said. "Without measures to control the spread of the disease, mobility remains higher and transmission is more likely."

Deaths would stay lower if Americans simply wore masks and stayed home more. If most people followed social distancing and masking guidelines, 30,000 fewer people would die by May 1, according to the IHME.

States work to get over the distribution hurdle

In US states, leaders have taken different tacks in approaching lags in vaccine distribution and administration.

West Virginia, which has been vaccinating people at a rapid clip, is allowing all residents 16 years and older to register for a vaccine after all residents at nursing homes and assisted living facilities who wanted the shots have gotten them, Gov. Jim Justice said Friday.

"Next week there will be vaccine clinics in all 55 counties," Justice said. "This will make sure our limited supply of vaccines gets to every corner of the state."

In Connecticut, more than 364,200 total doses have been administered as of Thursday -- meaning 35% of people 75 and older have been inoculated in the state.

"Connecticut continues to be a leader in getting people vaccinated," Gov. Ned Lamont said during a news briefing Thursday, adding that the promise from the Biden administration to increase state allotment by 16% means more people will be vaccinated faster.

But in Ohio, officials must change plans because the state wants students back to school in March.

While vaccine supply in the state is limited, Ohio has pulled vaccines from its allocation to set aside around 55,000 for the state's K-12 school staff every week, Gov. Mike DeWine said.

Meanwhile, Idaho is calling for more transparency in how its current distribution plan is going, Gov. Brad Little said.

"Quite frankly, we need a clearer picture to shine more light on vaccine administration," Little said during a Thursday news conference in Boise.

His new order requires both private health care companies and public health districts to tell the state on a weekly basis how many doses it has received, how many doses have been used and how many doses are still in inventory. The numbers will be posted to the state's public online Covid-19 dashboard.

Part of the goal is to make sure providers are meeting the state's goal of having each available dose used within seven days of delivery.