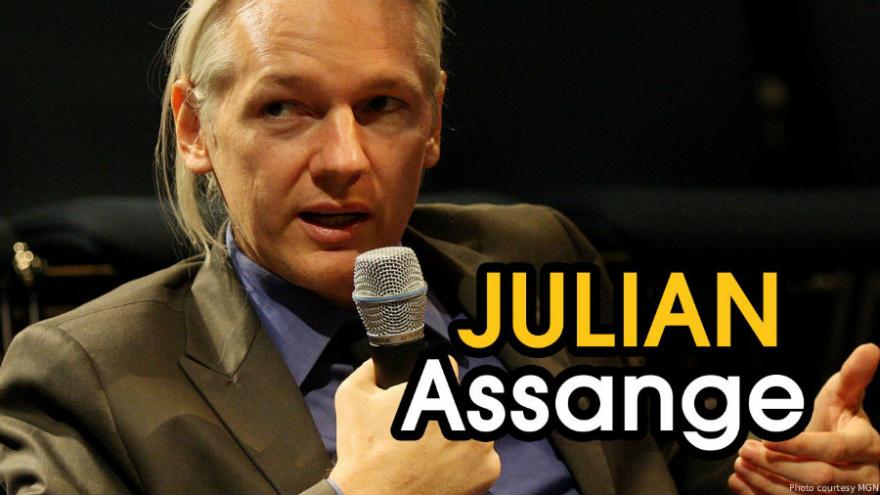 (CNN) -- Julian Assange's nearly six-year refuge at the Ecuadorian embassy in London is in danger, opening the WikiLeaks founder to arrest by British authorities and potential extradition to the US, multiple sources with knowledge tell CNN. 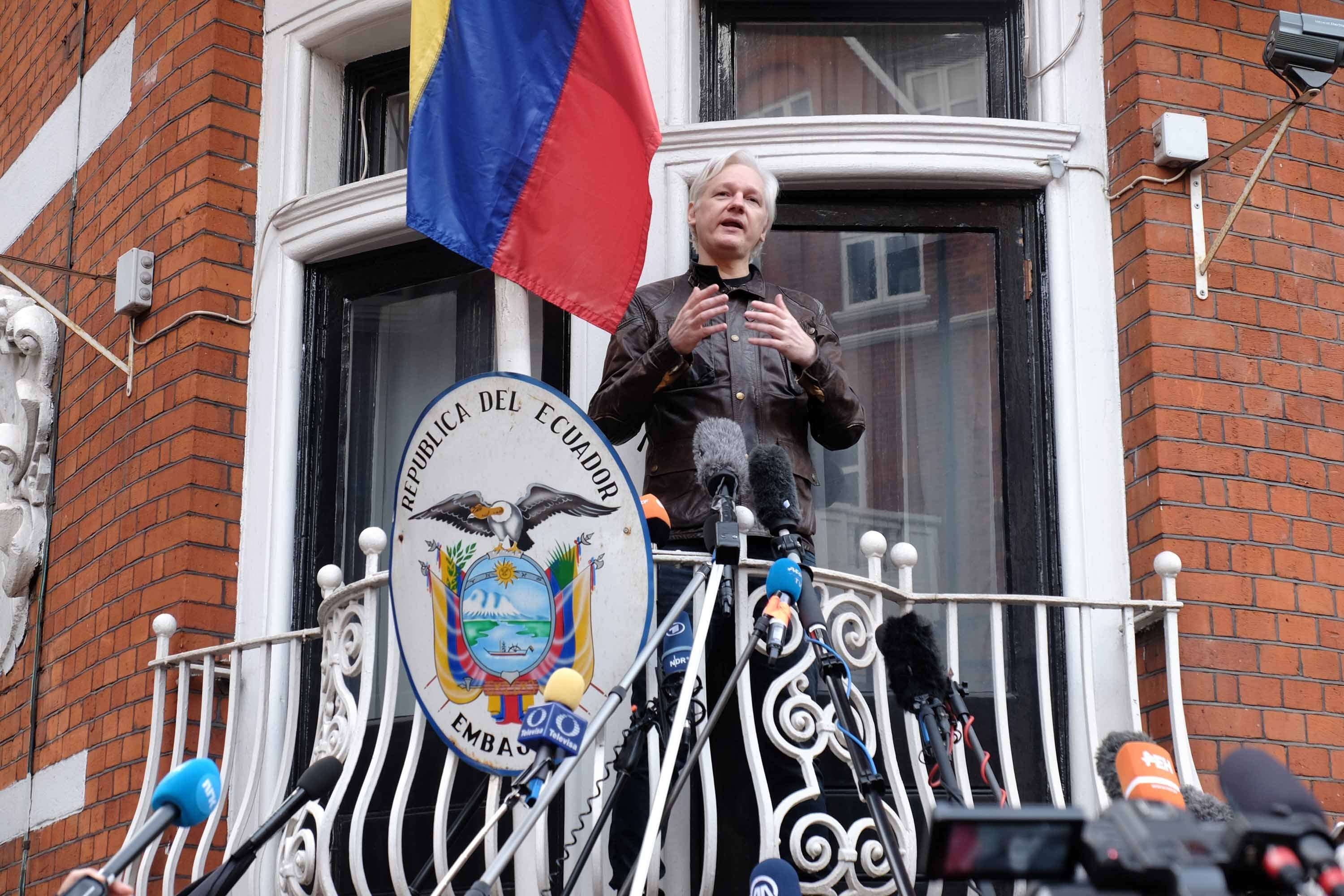 While Assange has in the past claimed his position in the embassy was under threat, sources say his current situation is "unusually bad" and that he could leave the embassy "any day now," either because he will be forced out or made to feel so restricted that he might choose to leave on his own. His position there is "in jeopardy," one source familiar with the matter said.

Assange's exit from the embassy could open a new phase for US investigators eager to find out what he knows.

CNN reported in April 2017 that the US has prepared charges to seek the arrest of Assange, who US intelligence agencies believe Russia used as an intermediary to distribute hacked emails from Hillary Clinton's campaign during the 2016 presidential election.

Assange and his lawyers say he has been detained without charge for 2,720 days -- 53 of those "gagged" and isolated from visitors and outside communications -- and that there is "not a shred of evidence that Assange has done anything but publish material just as the establishment media do every day," according to a tweet by his lawyers on May 19.

"The concern from day one until the present is that if Julian Assange walks out of the Embassy, he will be extradited to face what the executive director of the ACLU described as an 'unprecedented and unconstitutional' prosecution under the US Espionage Act," his lawyer Melinda Taylor told CNN.

Ecuador's newly elected president, Lenín Moreno, is under increasing pressure from the US to expel Assange, sources say. Moreno described Assange as an "inherited problem" and "more than a nuisance" in a television interview in January.

Recently, the Ecuadorian government cut off Assange's access to the internet, making it virtually impossible for him to manage WikiLeaks. He has also had his access to visitors severely restricted. Assange is now only allowed to see his lawyers, who say their mobile phones are jammed while they are inside the embassy. He is dealing with multiple lawsuits.

While the Ministry of Foreign Affairs of Ecuador declined to comment on Assange's case, it referred CNN to past statements made on the decision to cut his internet access. In statements, the ministry denied mistreatment and suggested Assange had not been abiding by his agreement with Ecuador by publicly discussing the internal affairs of other nations, presumably Spain and the US. The ministry "acts in the strictest adherence to the Constitution, laws and international law," according to the March 2018 press release.

British authorities have said that they would issue a warrant for Assange's arrest if he were to leave the embassy. He faces charges in the UK for breach of bail for failing to surrender for extradition to Sweden, a charge a British judge upheld in February despite the fact that Sweden stopped investigating an allegation of rape against Assange in 2017. Swedish prosecutors maintain the right to resume the investigation if Assange leaves the embassy, however.

In the US, Assange's fate is even more uncertain. Assange's lawyers claim that US officials have maintained a secret grand jury investigation into WikiLeaks for nearly eight years.

"For the last eight years, the UK has refused to either confirm or deny that they have received an extradition request from the US. At the same time, they have refused to provide assurances that Julian will not be extradited to the US if such a request were to be received, and maintained an ever-present vigil of the Embassy, notwithstanding a UN directive to take steps to ensure Julian's immediate liberty," Taylor told CNN. "Their silence speaks volumes, particularly in light of recent statements from US officials that Julian's arrest and extradition are a priority."

Taylor was referring to comments in April 2017 by US Attorney General Jeff Sessions, who said that arresting Assange is a "priority." "We've already begun to step up our efforts and whenever a case can be made, we will seek to put some people in jail," Sessions said at a news conference in El Paso, Texas.

Representatives from the US government, including the White House, the Department of Justice, the State Department and the intelligence community either did not respond to request for comment or declined to discuss Assange's cases with CNN.

"Mr. Assange's presence in the Ecuadorian Embassy is a matter between the UK and Ecuador," one State Department official told CNN. "As a matter of policy, the Department of State neither confirms nor denies the U.S. government's intention to request extraditions."

CIA declined to provide additional comment about Assange and referred CNN to former Director Mike Pompeo's past statements on WikiLeaks, describing the group as a "hostile non-state intelligence service" rather than a media outlet. Pompeo, though he formerly tweeted his appreciation of WikiLeaks and the role it played in publishing Democratic National Committee emails during the election, told an audience at the Center for Strategic and International Studies in 2017 that the US can no longer give Assange a platform to speak freely and openly using information he's provided by leakers. "To give them the space to crush us with misappropriated secrets is a perversion of what our great Constitution stands for. It ends now," Pompeo said.

US authorities are also deeply interested in further investigating WikiLeaks' publication of a trove of source codes and documents revealing details about CIA hacking tools in March 2017. The FBI's prime suspect for the leak, revealed in recently unsealed court documents, is a CIA employee who developed some of those tools. The Department of Justice says that individual also managed an encrypted server that contained evidence of child pornography. Both the intelligence community and the Department of Justice continue to investigate the theft, one source familiar with the matter told CNN, though the two investigations are separate. Both would be interested in speaking with Assange about the disclosure if he were to leave the embassy.

Assange has had difficulties with his hosts in the past. The most memorable incident came in 2013 when several embassy employees were punished, one of whom was demoted, in part because of Assange's actions while there, according to two sources familiar with the matter, including one source at the Ecuadorian Ministry of Foreign Affairs. At the time, Assange was eager to get involved to help NSA whistleblower Edward Snowden find asylum in Ecuador, establishing WikiLeaks as the preeminent organization for whistleblower protection. He convinced a high-ranking embassy employee to help him. When top officials found out, several employees suffered the consequences, including at least one demotion. Assange has since said he encouraged Snowden to stay in Russia.

The Guardian reported last week that the embassy for years had spent millions on protecting Assange using expensive surveillance tools from cameras to spy software -- while Assange turned around and hacked into the embassy's communication systems. Ecuador has cut off Assange's internet access multiple times, the most recent instance in late March.