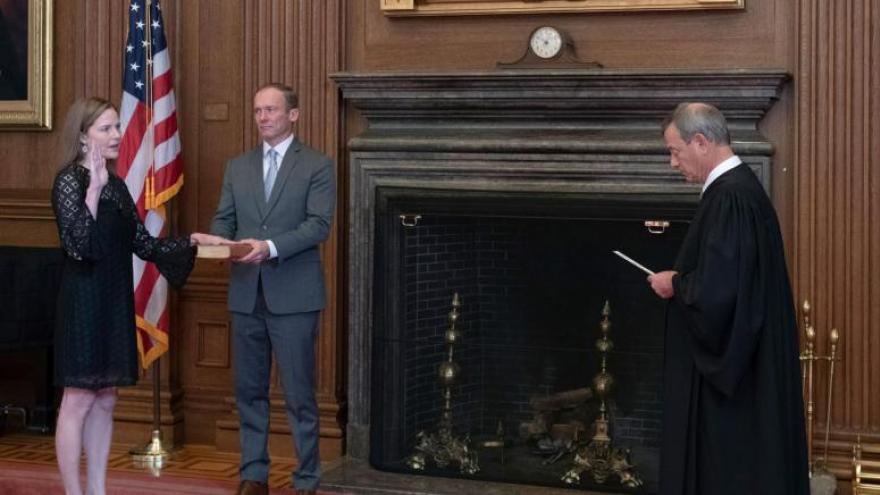 (CNN) -- Justice Amy Coney Barrett recited the judicial oath Tuesday morning in a swearing-in ceremony administered by Chief Justice John Roberts, officially beginning her tenure as the 115th justice on the Supreme Court -- and was greeted with a request to recuse herself from a key election-related case.

The ceremony took place in the East Conference Room of the court and Barrett is seen a photo shared by the court with her right hand raised and left hand placed on a family Bible held by her husband, Jesse, as she took the oath.

All Supreme Court justices participated in the ceremony except Justice Stephen Breyer, who listened by phone from his home in Cambridge and felt it was safest to avoid travel and attend virtually, according to the court's public information officer Kathy Arberg.

All attendees wore masks and observed appropriate social distance for the ceremony, the court said. Barrett's children did not attend.

Barrett was confirmed by the Senate with a 52-48 vote on Monday.

At the White House Monday, Barrett said in a speech it was "a privilege to be asked to serve my country" and highlighted the "separation of duty from political preference."

"My fellow Americans, even though we judges don't face elections, we still work for you. It is your Constitution that establishes the rule of law and the judicial independence that is so central to it," she said. "The oath that I have solemnly taken tonight means at its core that I will do my job without any fear or favor, and that I will do so independently of both the

Barrett, 48, begins her tenure as associate justice of the Supreme Court a week before Election Day and is likely to serve on the court for decades. Her seat on the bench gives conservatives a 6-3 majority, shifting the makeup of the high court that could affect a range of issues that could come before it, including potential disputes regarding the 2020 election and the future of the Affordable Care Act.

A recusal request on the first day

Lawyers for a Pennsylvania county filed a petition with the Supreme Court Tuesday asking Barrett to recuse herself from an election-related case.

The Supreme Court is currently considering a request from Pennsylvania Republicans asking the justices to block a state Supreme Court decision that allowed the counting of ballots received three day after the election, even if there is no legible postmark. Luzerne County -- whose lawyers penned the brief -- supports the state court decision.

Lawyers acknowledged that their motion "comes at an inopportune time for Justice Barrett, this being her first day as an Associate Justice."

But they said that they needed to move quickly as her participation would be "catastrophic to the delicate foundation of integrity and public confidence upon which the judiciary sits."

They noted September comments made by President Donald Trump while her nomination was pending suggesting that the Supreme Court would be called upon to determine the winner of the presidential election.

"The present case is one of utmost important to the President's re-election bid," they wrote. "Just as President Trump has placed Justice Barrett on the Supreme Court with whatever hope or expectation he may have, he has also imposed on her the duty to recuse herself in this case. Her integrity and the integrity of this Court cannot tolerate any other choice."

At the Supreme Court it is up to individual justices to decide whether they should recuse themselves. During confirmation hearings before the Senate Judiciary Committee, Democrats pressed Barrett if she would promise to do so but she made no commitments.

This story has been updated with details of the recusal request.