Astronomers find the closest black hole to Earth, 1,000 light-years away 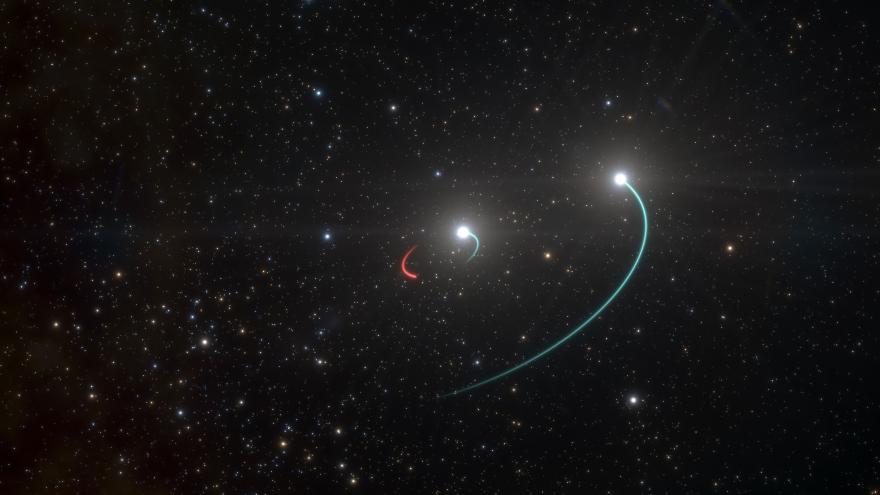 This artist\'s impression shows the orbits of the objects in the HR 6819 triple system. This system is made up of an inner binary with one star (orbit in blue) and a newly discovered black hole (orbit in red), as well as a third star in a wider orbit (also in blue).
By Ashley Strickland, CNN

(CNN) -- A black hole has been discovered 1,000 light-years from Earth, making it the closest black hole to our solar system ever found.

Although the black hole itself is invisible, it has two bright companion stars that gave away the hiding spot of the black hole. The two stars can be seen with the naked eye on dark, clear nights in the southern hemisphere. (A black hole is a place in space that even light can't get out because gravity pulls so much.)

When astronomers observed the star system, in the Telescopium constellation, they noticed that one of the stars was completing an orbit around a hidden object every 40 Earth days. The second star is further out from the first star and the black hole.

This revealed that what they were actually seeing was a triple system that included a black hole, not just a double star system. The observation was made using the MPG/ESO 2.2-meter telescope at the European Southern Observatory's La Silla Observatory in Chile.

A study published Wednesday in the journal Astronomy & Astrophysics describes the triple system.

"We were totally surprised when we realized that this is the first stellar system with a black hole that can be seen with the unaided eye," said Petr Hadrava, study co-author and Emeritus Scientist at the Academy of Sciences of the Czech Republic in Prague, in a statement.

Because this black hole doesn't have violent interactions with its surroundings, it's truly invisible. That makes it one of the first stellar-mass black holes found that doesn't interact violently with its environment. But studying the star orbiting it signified the presence of the black hole.

"An invisible object with a mass at least 4 times that of the Sun can only be a black hole," said Thomas Rivinius, lead study author and European Southern Observatory scientist, in a statement.

Over the years, astronomers have found a couple dozen black holes in our Milky Way galaxy. They announce their presence by having disruptive, violent interactions with their surroundings and releasing detectable X-rays.

But this new detection of a silent black hole could be the first of many to come in the future, the researchers said. They believe that over the course of our galaxy's lifetime, a multitude of stars have collapsed and created black holes. Now, astronomers just have to find them.

"There must be hundreds of millions of black holes out there, but we know about only very few. Knowing what to look for should put us in a better position to find them," Rivinius said.

The researchers believe this newly detected one so close to Earth is just "the tip of an exciting iceberg," said Dietrich Baade, study co-author and Emeritus Astronomer at the European Southern Observatory, in a statement.

And they already have another system in mind, known as LB-1.

"We realized that another system, called LB-1, may also be such a triple, though we'd need more observations to say for sure," said Marianne Heida, study co-author and postdoctoral fellow at the European Southern Observatory, in a statement."LB-1 is a bit [farther] away from Earth but still pretty close in astronomical terms, so that means that probably many more of these systems exist.

"By finding and studying them we can learn a lot about the formation and evolution of those rare stars that begin their lives with more than about 8 times the mass of the Sun and end them in a supernova explosion that leaves behind a black hole."

These triple systems are also intriguing because they could shed light on the massive mergers between black holes, stars or some configuration of the two that create gravitational waves.