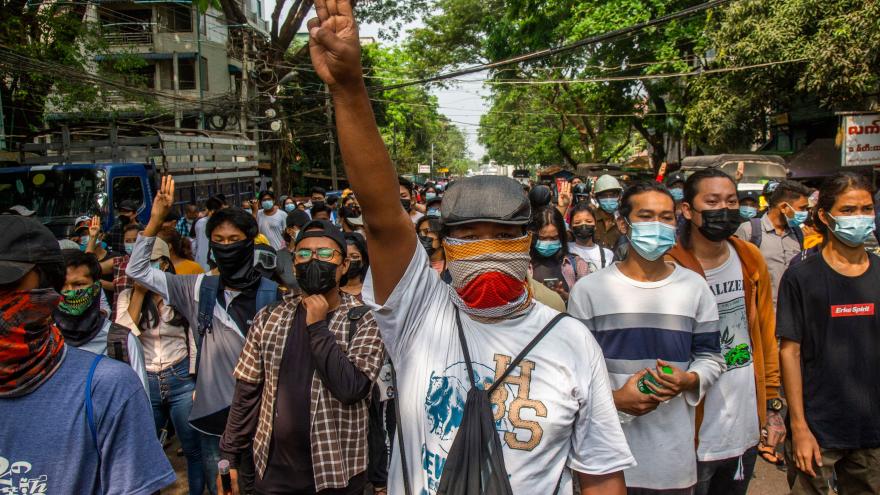 Anti-coup protesters gesture with a three-finger salute, a symbol of resistance, during a demonstration in Yangon, Myanmar, on March 27. - AP

By Radina Gigova and Reuters, CNN

(CNN) -- At least 114 civilians were killed across Myanmar on Saturday, according to a tally by the independent Myanmar Now news outlet, as the military junta continued to crack down on peaceful protests.

The killings in 44 towns and cities across the country would represent the bloodiest day of protests since a military coup last month.

Among those killed is reportedly a 13-year-old girl, who was shot in her house after the junta's armed forces opened fire in residential areas of Meikhtila, in Mandalay region, according to Myanmar Now. She is among 20 minors killed since the start of the protests, Myanmar Now reported.

CNN has been unable to independently confirm the number of people killed.

The lethal crackdown came on the country's Armed Forces Day. Senior Gen. Min Aung Hlaing, the junta leader, said during a parade in the capital Naypyitaw to mark the event that the military would protect the people and strive for democracy, Reuters reported.

State television had said on Friday that protesters risked being shot "in the head and back." Despite this, demonstrators against the February 1 coup came out on the streets of Yangon, Mandalay and other towns.

The United Nations secretary-general and the UN office in Myanmar spoke out against the violence Saturday.

"The continuing military crackdown, which today resulted in the highest daily death toll since demonstrations against the coup began last month, is unacceptable and demands a firm, unified and resolute international response. It is critical to find an urgent solution to this crisis," said a statement issued by Farhan Haq, deputy spokesman for the UN secretary-general. "The Secretary-General condemns in the strongest terms the killing of dozens of civilians."

The UN office in Myanmar said it "is horrified by the needless loss of life today with reports of dozens of people shot dead by the military across the country, in the bloodiest day since the coup."

"The violence is completely unacceptable and must stop immediately. Those responsible must be held to account," the UN office added. "As the Special Envoy on Myanmar, Christine Schraner Burgener has said, ensuring peace and defending the people should be the responsibility of any military, but the Tatmadaw has turned against its own people."

The Tatmadaw is the official name for Myanmar's armed forces.

According to the latest tally by the nonprofit Assistance Association for Political Prisoners, at least 328 people have been killed in Myanmar since the military coup on February 1.

Saturday's deaths would bring the total number of civilians killed to more than 400, but the exact number remains unclear. Aid groups fear the number may be higher.

A boy reported by local media to be as young as 5 was among at least 29 people killed in Mandalay. At least 24 people were killed in Yangon, Myanmar Now said, according to Reuters.

"Today is a day of shame for the armed forces," Dr. Sasa, a spokesman for CRPH, an anti-junta group set up by deposed lawmakers, told an online forum.

Meanwhile, one of Myanmar's two dozen ethnic armed groups, the Karen National Union, said it had overrun an army post near the Thai border, killing 10 people -- including a lieutenant colonel -- and losing one of its own fighters, Reuters reported.

A military spokesman did not respond to calls from the news agency seeking comment on the killings by security forces or the insurgent attack on its post.

"They are killing us like birds or chickens, even in our homes," said Thu Ya Zaw in the central town of Myingyan, where at least two protesters were killed, according to Reuters. "We will keep protesting regardless... We must fight until the junta falls."

'Day of terror and dishonor'

The US Embassy in Myanmar joined the European Union and United Kingdom embassies in condemning killings by security forces in Myanmar on Saturday and calling for an end to the violence.

"On Myanmar's Armed Forces Day, security forces are murdering unarmed civilians, including children, the very people they swore to protect. This bloodshed is horrifying," Thomas Vajda, US Ambassador to Myanmar, said in a statement.

"These are not the actions of a professional military or police force. Myanmar's people have spoken clearly: they do not want to live under military rule," he added.

"This 76th Myanmar armed forces day will stay engraved as a day of terror and dishonor," the EU delegation to Myanmar said. "The killing of unarmed civilians, including children, are indefensible acts."

News reports cited by Reuters said there were deaths in the central Sagaing region, Lashio in the east, in the Bago region, near Yangon, and elsewhere. A 1-year-old baby was hit in the eye with a rubber bullet.

"The army seeks to join hands with the entire nation to safeguard democracy," he said in a live broadcast on state television. "Violent acts that affect stability and security in order to make demands are inappropriate."

The military has said it took power because November elections won by Aung San Suu Kyi's party were fraudulent, an assertion dismissed by the country's election commission.

Suu Kyi, the elected leader and the country's most popular civilian politician, remains in detention at an undisclosed location. Many other figures in her party are also being held in custody.

In its warning on Friday evening, state television said protesters were "in danger of getting shot to the head and back." It did not specifically say security forces had been given shoot-to-kill orders, and the junta has previously suggested some fatal shootings have come from within the crowds.

International pressure on the junta increased this week with new US and European sanctions. But Russia's deputy defense minister Alexander Fomin attended the parade in Naypyitaw, having met senior junta leaders a day earlier, Reuters reported.

Diplomats told Reuters that eight countries -- Russia, China, India, Pakistan, Bangladesh, Vietnam, Laos and Thailand -- sent representatives, but Russia was the only one to send a minister.

Support from Russia and China, which has also refrained from criticism, is important for the junta as those two countries are permanent members of the United Nations Security Council and can block potential UN actions.

Armed Forces Day commemorates the start of the resistance to Japanese occupation in 1945 that was orchestrated by Suu Kyi's father, the founder of the military.

Gunshots hit the US cultural center in Yangon on Saturday, Reuters reported, but nobody was hurt and the incident was being investigated, US Embassy spokesperson Aryani Manring said.

Protesters have taken to the streets almost daily since the coup that derailed Myanmar's slow transition to democracy.

General Yawd Serk, chair of the Restoration Council of Shan State/Shan State Army - South, one of the ethnic armies in the country, told Reuters in neighboring Thailand: "If they continue to shoot at protesters and bully the people, I think all the ethnic groups would not just stand by and do nothing."

Author and historian Thant Myint-U wrote on Twitter: "A failed state in Myanmar has the potential to draw in all the big powers -- including the US, China, India, Russia, and Japan -- in a way that could lead to a serious international crisis (as well as an even greater catastrophe in Myanmar itself)."