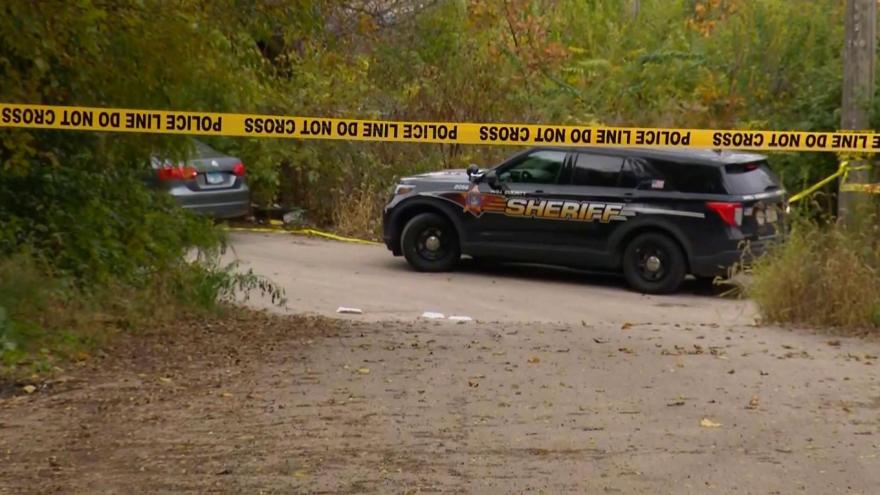 Joliet Township, Illinois, police said a mass shooting there happened near a DJ booth at a house party.

(CNN) -- Two people were killed and at least another dozen were injured as shots rang out at a house party in Illinois where people were gathering for Halloween.

It was one of at least 11 mass shootings in the US over the holiday weekend, including several at places where crowds had assembled.

The violence left at least 12 people dead and another 52 injured, according to CNN reporting and an analysis of data from Gun Violence Archive and local news and police reports. CNN defines a mass shooting as an incident with four or more people killed or wounded by gunfire, excluding the shooter.

The number of mass shootings in the US increased during the coronavirus pandemic. There have been 599 mass shootings so far this year, according to the archive. There were 611 in 2020 and 417 in 2019, the group said.

The increase in mass shootings during the pandemic is consistent with the notion that the violence may be influenced by social and economic factors, researchers have said.

Over the weekend, gunfire erupted at house parties, a boxing event and on the streets. These are the mass shootings that took place across seven states.

Two people were killed and at least 12 others were injured in shooting early Sunday at a Halloween party in Joliet Township, Illinois, according to the Will County Sheriff's Office. Joliet is about 40 miles southwest of Chicago.

A sheriff's patrol sergeant responded after hearing 10 to 12 gunshots, the sheriff's office said in a news release. The sergeant saw more than 100 people fleeing eastwards along the street.

The shooting occurred near a DJ booth set up in the backyard of a residence, law enforcement personnel determined, the news release said. Witnesses told detectives two people fired on the crowd of nearly 200 from a porch overlooking the party, according to the news release.

The identities of the deceased will not be released until their families are notified, the sheriff's office said.

In Decatur, Illinois, about 40 miles east of Springfield, another shooting incident at a large gathering left one person in critical condition and three others with non-life-threatening injuries, according to police.

Officers responded around 3:30 a.m. Saturday to reports of multiple shots fired and found a 29-year-old man with multiple gunshot wounds, the Decatur Police Department said in a statement. Three other shooting victims later presented at hospitals, and it was learned they sustained their injuries in the same incident, police said.

"Officers determined that a large house party in the 1100 block of N. Union, attended by upwards of 100 people had been taking place when multiple shots were fired by multiple shooters," according to the release.

Paramedics worked at the scene before all four victims were taken to hospitals, WLS said.

Police said they believed it was an isolated incident, WLS reported.

One person died at the scene, and another succumbed to injuries at a hospital, according to police, per KCNC.

Two other people who were shot were taken to the hospital on their own, KCNC reported.

Two people died after being shot early Sunday morning in Louisville, Kentucky, according to a news release from police provided to CNN by affiliate WAVE.

Louisville Metro Police Department officers responded to reports of a shooting near a gas station, where preliminary investigation suggested an altercation had taken place, the agency said. Emergency services took two men believed to be in their twenties to a hospital with gunshot wounds and both died, police said.

"As the investigation continued, detectives were informed by University Hospital that two other individuals, who appear to be in their 20s and who also may be connected to this incident had shown up by private vehicle, with gunshot wounds," police said. The severity of their injuries was not immediately known.

An 18-year-old woman was fatally shot and three others, including a 16-year-old boy, were wounded after a shooting early Sunday at a party in Houston, police said.

The Houston Police Department got "a shooting in progress" call shortly after midnight, Assistant Chief Yasar Bashir said at a news conference.

"Upon arrival, they found that this location was having a house party with a very large crowd and the crowd was dispersing when the officers arrived," he said. Officers began searching around the house for potential victims and, after finding the 18-year-old woman deceased, extended their search into the streets around the house.

Officers found evidence of a shooting at the rear of the house as well as on the street, Bashir said. "They found one weapon in the ditch, and we're going to try to find out if that gun was used in the commission of this crime or not," he said.

The 16-year-old and two "young adults" were later found to have been taken to hospitals by private vehicles.

Police had one possible suspect and anticipated that there would be more witnesses "and possibly more victims because everybody left the location," said Bashir, who encouraged anyone with information to call police.

In Texarkana, Texas, a shooting at a Halloween party left one person dead and nine others injured, the Texarkana Police Department said Sunday.

Officers responded to reports of a shooting shortly before midnight at Octavia's Activity Center, an event venue in the 2300 block of Texas Boulevard, and "encountered a large number of people running from the building and several inside suffering from gunshot wounds," the Texarkana Police Department said in a statement on Facebook. Texarkana is about 180 miles east of Dallas.

A suspect turned himself in to police Sunday after a warrant was issued for his arrest, the police department said in a later Facebook post. He was charged with felony aggravated assault, and more charges are expected to be filed Monday, the post said.

At the time of the shooting, a few hundred people were inside the venue, police said.

A 20-year-old man died shortly after being admitted to the hospital, while the other nine victims' injuries did not appear to be life-threatening, police said.

A shooting Saturday at the home of a city council member in Gilroy, California, left one person dead and three others injured, according to the Gilroy Police Department.

"When officers arrived on the scene, they encountered a large outdoor party at the residence," the police department said in a news release. "Officers learned that an altercation occurred just prior to their arrival, and at least one suspect fired a gun."

A male victim was pronounced dead on the scene, while two of the three surviving victims had life-threatening injuries, police said. The victims were between 17 and 19 years old, police said.

A suspect, a 19-year-old from Gilroy, has been arrested and booked in jail for homicide, police said in a news release Sunday.

The altercation happened just before 1 a.m. at the home of Gilroy City Council Member Rebeca Armendariz, according to police. CNN has reached out to Armendariz for comment.

"Because this remains an active investigation, I am unable to share more at this time but I would like to thank all of the members of the community who have reached out to express their concerns for their patience," Armendariz told CNN affiliate KGO in a statement.

In Sacramento, California, two people were killed and five wounded at a party early Saturday morning, according to investigators.

Deputies responded to a party at a business with "hundreds of people in attendance," the Sacramento County Sheriff's Office said in a statement.

"They located three, adult males suffering from at least one gunshot wound. They immediately began life-saving measures on the subjects while fire personnel arrived. Two of the subjects were pronounced deceased at the scene and the third subject was transported to a local hospital in serious, but stable condition," the sheriff's office said.

Four more shooting victims were taken to the hospital in private vehicles before deputies arrived. They were said to be in serious but stable condition.

Police say five people were shot, including one fatally, at an outdoor boxing event Saturday night in St. Petersburg, Florida.

Some 200 people were at the event in a parking lot at the Skyway Plaza, police said in a statement posted to Facebook.

"An altercation between two groups occurred and several shots were fired," the statement said. A 21-year-old man died of his injuries while two men and two women suffered gunshot wounds.

As of Sunday, one person had been arrested, the statement continued.