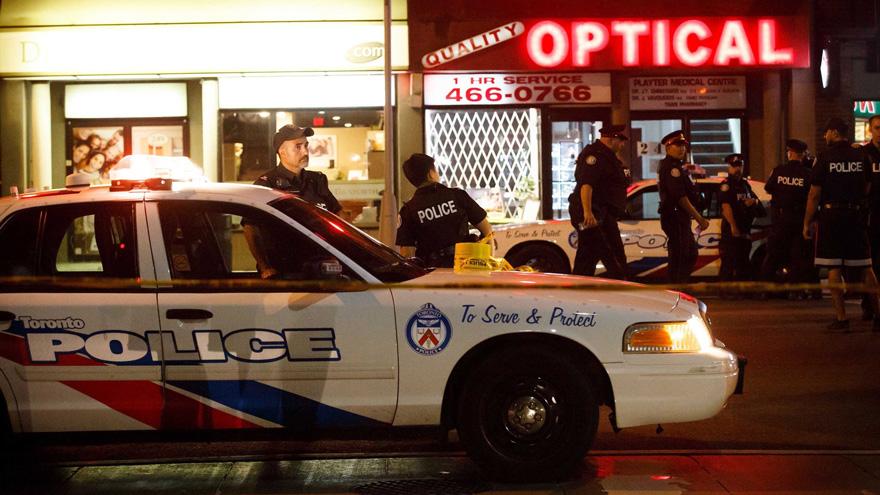 (CNN) -- A second victim has died after a gunman opened fire in a popular Toronto neighborhood late Sunday night.

Police said the second victim died Monday morning. Neither that victim nor the one who died overnight have been publicly identified.

The gunman is also dead, Toronto Police Chief Mark Saunders said. It was not immediately clear whether the assailant died from a self-inflicted gunshot wound or from police gunfire.

Now, as a dozen wounded victims try to recover from their injuries, police are trying to understand what prompted the deadly shootings.

Saunders said police are investigating "every possible motive, including terrorism."

'I saw the carnage as I ran down the street'

"There was a lot of commotion in the street," he said. "I saw somebody come just down the sidewalk and shoot into Demetres restaurant."

Van Eek described the suspect as a white male in his 30s wearing black clothing.

Another witness told CNN partner CTV he heard about 20 shots and the sound of a weapon being reloaded repeatedly.

"And then I saw the carnage as I ran down the street here to kind of follow the gunfire," the man told CTV. "I saw at least four people shot."

Witness Jody Steinhauer was dining with her family at a Greek restaurant called Christina's when she heard what she thought was the sound of firecrackers. Then she was told to run to the back of the restaurant.

The crime scene stretched over a distance, the police chief said.

Witnesses were taken by buses to multiple offices to speak with investigators. Police asked witnesses or anyone with information to contact authorities.

Toronto Mayor John Tory said he was "outraged that someone has unleashed such a terrible attack on our city and people innocently enjoying a Sunday evening."

"We have a gun problem in that guns are readily available to too many people," Tory said. "The police are doing their best, but they're operating under extraordinarily difficult circumstances to deal with these guns. And we'll see what they conclude from this case, but it's evidence of a gun problem, clearly."

On Friday, the city rolled out a program to put 200 more officers on the streets of at-risk neighborhoods between 7 p.m. and 3 a.m. to combat gang violence, according to CTV. It was not immediately clear if Greektown was included in that program.

Earlier this month, CTV reported that by July 8, there had been more than 200 shootings in Toronto and 26 fatalities. It said that during the same time period last year, there were 188 shootings resulting in 17 deaths.

It said the extra staffing was intended to last for eight weeks, after which police would "re-evaluate their needs."

In total, CAN $15 million ($11.4 million USD) had been set aside for efforts at curbing gun violence in Toronto, with some money going to community programs aimed at stopping young people from joining gangs, CTV quoted Tory as saying.

Neighborhood known for its Greek population

Some expressed shock that Greektown was the site of the shooting rampage.

"It's the street where families come. They were all out tonight walking, having their dinner ... it's just unbelievable in this neighborhood," one witness said.

Its website says visitors will "experience a neighborhood alive with interesting restaurants, boutiques, shops, markets, cafes, and a host of wonderful experiences."

According to the 2016 Census, Greek was the second most commonly spoken language at home -- behind English -- in the Toronto-Danforth city ward that contains Greektown. Six percent of the ward's immigrant population was Greek-born.

Canadian Prime Minister Justin Trudeau offered his condolences to all those affected by the catastrophe in Greektown.

"My thoughts are with everyone affected by the terrible tragedy on the Danforth last night in Toronto, and may the injured make a full recovery," Trudeau tweeted.

"The people of Toronto are strong, resilient and brave - and we'll be there to support you through this difficult time."