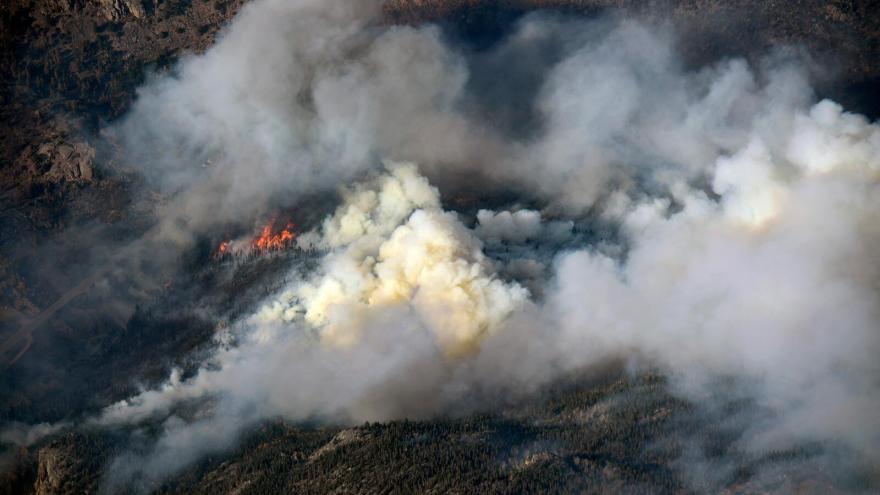 Heavy Smoke and flames rise from the Cameron Peak fire as the fire continues to burn in Larimer County.

(CNN) -- At least four new wildfires sparked over the weekend in Colorado and Utah during what has been a record-breaking fire season in the western US.

More than 8.3 million acres have burned across the country this year, according to the National Fire Interagency Center.

In Colorado, firefighters battled the CalWood and Lefthand Canyon fires in Boulder County over the weekend. Those blazes arose as responders continue to fight the Cameron Peak fire, the largest wildfire in state history.

The fast-moving CalWood Fire in the foothills of Colorado's Rocky Mountains quickly grew to nearly 9,000 acres after sparking in Boulder County Saturday.

"This is actually the biggest wildfire in Boulder County history," Boulder County Sheriff's Office Division Chief Mike Wagner said during a press briefing Sunday, "as far as by acreage, and so it's the largest our community has ever seen."

The CalWood fire has destroyed at least 26 homes in an area that had been ordered to evacuate near the town of Jamestown Saturday, and it's believed several other homes have likely burned, Wagner said.

"We don't believe that their list is complete," Wagner said of the destroyed structures. "There's likely more structures that we just could not get to within that burn area, and so damage assessment teams are going to come and go out again tomorrow attempt to locate additional structures and report those out as we can."

A list of homes that have been destroyed will be posted to the Boulder OEM website, Wagner said.

About 1,600 homes and 2,600 structures were included within the perimeter of the mandatory evacuation zone issued Saturday, with about 3,000 people affected by the evacuations.

About 250 firefighters were in the field working to establish a direct line around the perimeter of the CalWood fire Sunday, Wagner said.

"That's one of their number one things is try to keep the fire knocked down and protect structures that have not been impacted by the fire yet," the chief said. "They're gonna continue to construct a direct fire line which I spoke around the perimeter of the fire to secure it."

Air operations were planned for Sunday, but weather conditions have prevented aircraft from flying, Wagner said.

"The plan was to try to hit the fire really heavy with air resources this morning there were a number of aircraft on order with the conditions you see down here, and visibility aircraft can't fly," Wagner said.

Additional resources, including a federal firefighting team, were scheduled to arrive Sunday and take over command of the CalWood fire by Monday morning, Wagner said.

Two people who were unaccounted for Saturday were located Sunday, and one firefighter suffered a minor ankle injury battling the CalWood fire, according to Wagner.

A joint investigation has been launched for the CalWood Fire by the Boulder Sheriff's office and the US Forest Service, Wagner said.

A second fire -- the Lefthand Canyon fire erupted Sunday near the town of Ward, about 15 miles southwest of Jamestown, Boulder OEM said in a tweet. Nearly 150 homes were ordered to evacuate because of the blaze.

The Lefthand Canyon fire burned more than 300 acres in a matter of hours, according to Wagner. On Monday afternoon, Boulder OEM reported that the fire was 4% contained.

While cooler temperatures and increased humidity helped fire suppression on Sunday, Wagner said, there are concerns about the impact of increased heat and dryness in the coming days.

The National Weather Service Boulder office said strong gusts of up to 50 mph will develop over the foothills early Monday. A few sprinkles and flurries are also forecast.

"These conflicting factors will keep the fires active but should limit growth tonight," NWS Boulder said on Twitter Sunday night.

Wagner added that maintaining Covid-19 protocols is adding another "layer of complexity" to firefighting operations.

"Trying to do all that while trying to comply with all the COVID safety protocols, which just adds a whole different layer of complexity to any large event, or large incident. And this would be no different," Wagner said.

The Cameron Peak Fire burning near Fort Collins, in the northeast part of the state, has burned 203,253 acres and is 62% contained, according to Inciweb.

The fire is the largest wildfire ever recorded in the state and the first known to reach 200,000 acres. It ignited on August 13 in the Arapaho and Roosevelt National Forests.

"Although weather conditions are expected to moderate, significant fire activity along (the) unsecured line will continue to be a concern," the update said.

Two new wildfires in Utah that ignited over the weekend have burned nearly 4,500 acres, according to posts on Twitter from Utah Fire Info.

The Range Fire is burning just outside of the city or Orem, in Utah County, about 40 miles southeast of Salt Lake City. As of Sunday night it had grown to 3,000 acres and no containment had been reported.

About a hundred miles northeast of the Range Fire, the Fire Canyon Fire started Saturday and has burned at least 1,460 acres and has been 10% contained.

Suppression operations continued throughout the day, with the use of aircraft and firefighters on the ground, Utah Fire said.

The Fire Canyon Fire was first spotted burning near a ridge between Fire Canyon and Bald Canyon the Utah Division of Wildlife Resources said in a press release where the agency announced the temporary emergency closure of the Henefer-Echo Wildlife Management Area because of the fire.

The blaze is not currently threatening any structures and the cause of the fire is still being investigated but it is believed to be human-caused according to Utah Fire Info.

Dry conditions and above normal temperatures are forecast in Utah through Wednesday, when a front will approach bringing cooler and wetter weather to the region, according to CNN Meteorologist Michael Guy.

In California, firefighters have been battling a historic number of fires since early August when the fire season picked up.

Thirty-one people have died and more than 9,200 structures have been destroyed this season, with more than 4.1 million acres burned this year.

Firefighters responded to and quickly contained 23 new wildfires Saturday while continuing to battle 20 existing fires throughout the state, an update from California Department of Forestry and Fire Protection (CalFire) said.

Twelve of the 20 wildfires in California are considered "major incidents," CalFire said.

"Although the Red Flag Warnings have expired, dry weather and unseasonably warm temperatures continue through much of next week" and no rain is forecast, said CalFire.

There are currently 7,700 firefighters on the frontlines, according to CalFire.

CORRECTION: An earlier version of this story overstated the containment level of Lefthand Canyon Fire.