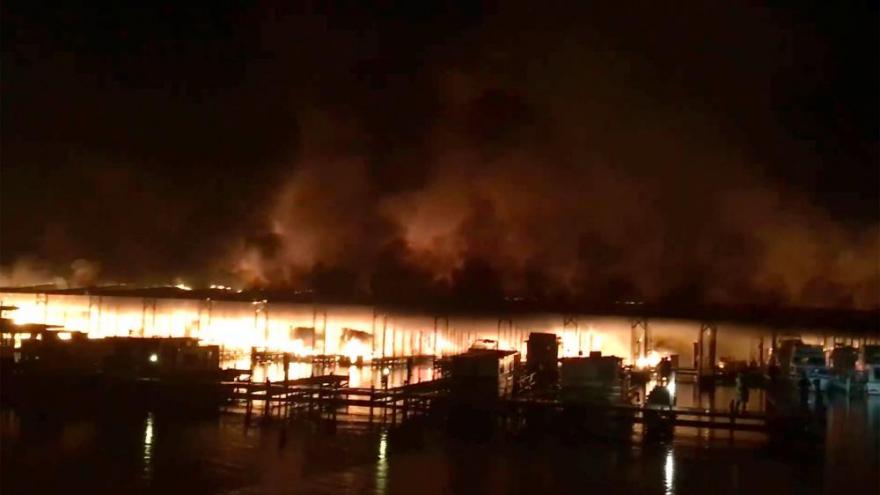 This photo provided by Mandy Durham shows a fire burning on a dock where at least 35 vessels, many of them houseboats, were destroyed by fire early Monday, Jan. 27, 2020, in Scottsboro, Ala. Scottsboro Fire Chief Gene Necklaus is confirming fatalities in a massive fire at a boat dock.
By Amanda Watts and Eric Levenson, CNN

(CNN) -- At least eight people died and more are missing after an overnight fire destroyed a dock of about 35 boats in Jackson County Park in Alabama, authorities say.

Two bodies have been recovered from the water, according to Chief Deputy Rocky Harnen with the Jackson County Sheriff's Department.

Most of the boats at the dock were houseboats, the Scottsboro Fire Department said.

Harnen said it was a "total destruction" of about 35 boats, which were at the covered boat dock.

"The dock is collapsed, (and) we can't get to all the boats right now," Harnen said. "We have a list of residents here and we are trying to confirm whereabouts of everyone."

Some boats sank at the dock and some floated away before sinking in the lake, Scottsboro Fire ChiefGene Necklaus said.

Seven people were rescued from the water and taken to the hospital for burns and potential hypothermia, Necklaus told CNN affiliate WHNT. Each of the seven had jumped off a boat or off a dock into the water, and all are in stable condition, he said.

Agencies from across the state are responding, including Scottsboro Police, Jackson County and the State Fire Marshal.

Harnen said divers will search in the water soon on Monday morning. Several boats drifted away from the dock while on fire and then submerged.

Jackson County Park is about 100 miles northeast of Birmingham.