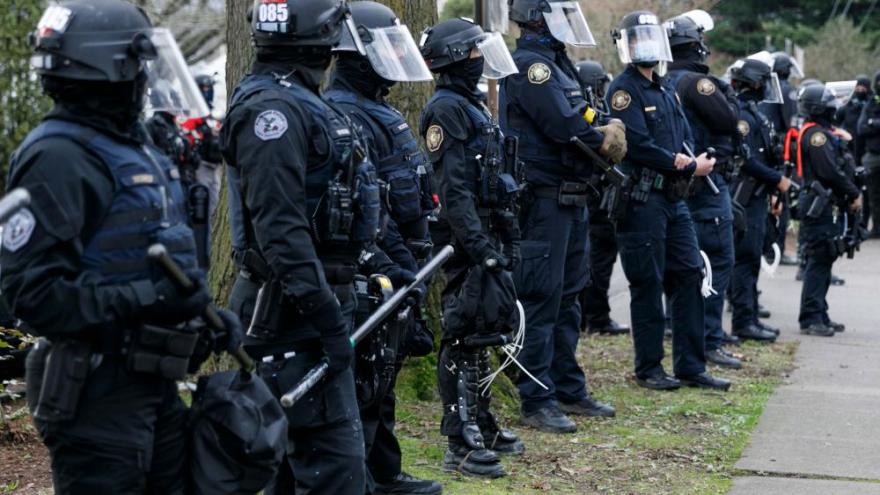 Police form a line in Portland, Oregon, during protests on January 20.

(CNN) -- Demonstrators in Portland, Oregon, on Wednesday vandalized the state Democratic Party headquarters and a federal US Immigration and Customs Enforcement building, according to police. Four people have been charged Thursday in connection with those demonstrations.

At least four demonstrations were planned in the city, Sgt. Kevin Allen, spokesman for the Portland Police Bureau, said in a video statement early Thursday.

Two remained peaceful, but the others resulted in "property damage and arrests," he said. CNN is attempting to learn more about who organized the demonstrations.

A group of about 150 people converged on the ICE building in the South Waterfront neighborhood Wednesday evening around 9 p.m., Allen said.

In an updated statement, police said many in the crowd wore gas masks and helmets, and within a few minutes, people began tagging the ICE building with graffiti.

CNN affiliate KOIN reported that the graffiti included messages like, "Reunite families now" -- a possible reference to the separation of migrant children from their parents. There were other messages with an anti-law enforcement sentiment, calling on the abolition of ICE with another anarchy symbol. One message read, "Kill cops!!!"

CNN affiliate KOIN reported its journalists at the scene saw law enforcement use what appeared to be tear gas, along with stun grenades and pepper balls. Several people appeared to be taken into custody, according to KOIN.

Allen said that police were in the surrounding neighborhood and "some arrests were made."

The city and the ICE building have been the sites of repeated clashes between protesters and federal authorities in recent months. Police did not characterize the makeup of the groups involved in Wednesday's protests.

8 arrests made after vandalism at Democratic Party headquarters

The demonstration at the ICE building followed another earlier in the day, when a crowd of about 150 people gathered at Revolution Hall before marching to the Oregon state Democratic Party headquarters.

Officers on bicycles encountered the protesters in a parking lot at Revolution Hall, where "(d)ozens of people pressed in on the officers and then took one of the officers' bicycles," Portland Police said in a statement. More officers arrived to help and managed to get the bicycle back. The crowd blocked officers' way as they tried to leave.

The group then left Revolution Hall and marched to the Democratic Party headquarters, where some demonstrators "smashed windows and vandalized the building," Allen said.

At one point, the crowd "showed aggression by swarming officers and throwing objects," Allen said.

Images from CNN affiliate KATU showed an anarchy symbol spray painted next to the building's front door with a profane reference to newly inaugurated President Joe Biden on the other side.

Another showed the crowd making their way up the street, many of them clad in all black, carrying a sign that read, "We are ungovernable." The station reported the demonstration was billed as a protest against Biden and law enforcement, while supporting the rights of indigenous people.

At least eight people were arrested on various charges, including felony criminal mischief, possession of a destructive device and rioting, Allen said.

In a statement, the Democratic Party of Oregon said none of its staff were in the building at the time, but they were "frustrated and disappointed."

"This is not the first time our building has been vandalized during the past year -- none of the prior incidents have deterred us from our important work to elect Democrats up and down the ballot, and this one will be no different," the statement said.

Police in Seattle also reported vandalism to several buildings in its downtown area Wednesday night, including at a federal courthouse.

The department shared photos on Twitter, saying "multiple windows" were shattered at the William Kenzo Nakamura US Courthouse, used primarily by the Ninth Circuit Court of Appeals.

Other photos shared by police showed an Amazon Go store with anarchy symbols and anti-Biden and anti-police graffiti. Several windows were shattered. Other pictures showed broken glass at a Starbucks storefront.

Several arrests were made, police said, including some for property damage and assault. Another man was arrested in connection to a burglary investigation at the Starbucks.