At least 8 dead and many injured after crowd surge at Travis Scott's Astroworld Festival in Houston, officials say 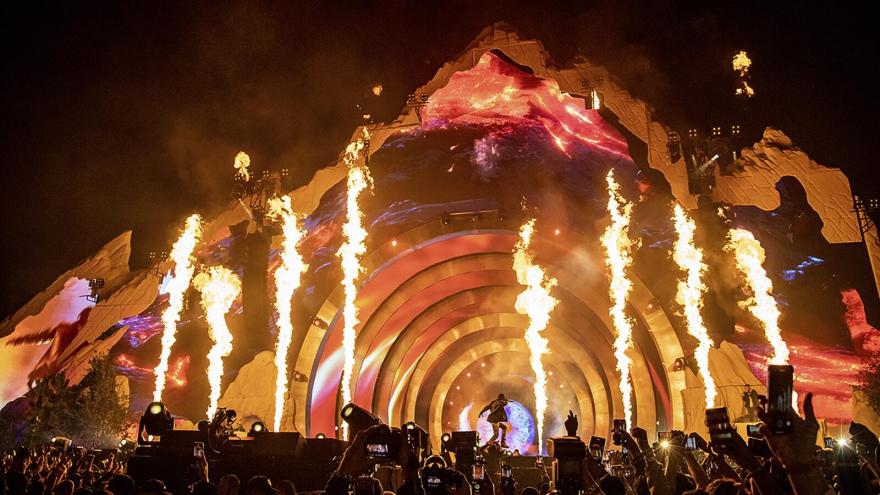 Travis Scott performs on day one of the Astroworld Music Festival in Houston's NRG Park on November 5, 2021.

(CNN) -- Members of a densely packed crowd surged toward a stage and were crushed against each other at a Houston music festival Friday night. At least eight people were killed and scores of others were injured in the chaos, witnesses and officials said.

The victims were 14, 16, two were 21, two were 23 and one was 27 years old, while one of the victim's ages remains unknown, Houston Mayor Sylvester Turner announced in a news conference Saturday evening. There are no people reported missing, the mayor added.

At least 25 people were transported to the hospital and of those, 13 remained hospitalized Saturday afternoon, the mayor said. Five of them are under 18 years old, he added.

"There are a lot of unanswered questions," Turner said. "Over the next several days, several weeks, could be even longer, we'll take an in-depth look at everything that took place, why it took place, what steps we can do moving forward to mitigate an incident of this kind from taking place."

About 50,000 people were at the sold-out Astroworld Festival at NRG Park -- the stadium complex where the Astrodome and the NRG Stadium stand -- when the incident began just after 9 p.m. CT, officials said.

Video from the event showed the performer on an outdoor stage -- rapper and event organizer Travis Scott -- pause and look on in confusion as an ambulance with flashing lights moved into the densely packed crowd.

"Once (Scott) started, all hell broke loose," concert-goer Alexis Guavin, 23, told CNN. "All of what is to be 50,000 people ran to the front, compressing everyone together with the little air available."

Guavin added there were "mosh pits in every single direction."

The company responsible for organizing the event, Live Nation, issued a statement saying they were "heartbroken for those lost and impacted."

"We will continue working to provide as much information and assistance as possible to the local authorities as they investigate the situation," the statement said.

'I realized that people were dying'

People there described being increasingly squeezed in the minutes before Scott's performance began, and then feeling crushed and seeing others pass out and scream in terror once his show started.

"The crowd was squishing me so much that I felt like I couldn't breathe," Emily Munguia, 22, told CNN. "I started screaming for help ... I felt so scared, like I was going to die."

"The amount of people I saw get hurt, passed out, bleeding, crying is crazy," Munguia said.

The crowd "for whatever reason began to push and surge towards the front of the stage, which caused the people in the front to be compressed," Houston Fire Chief Sam Peña told CNN Saturday morning.

"People began to fall out, become unconscious," Peña said at a news conference.

Another woman in the crowd, Madeline Eskins, ultimately passed out and was apparently crowd-surfed to safety, she wrote in an Instagram post.

As a timer on a screen counted down 30 minutes to Scott's performance, "people compressed up against each other and were pushing forward and backward," and it got progressively worse, Eskins told CNN Saturday.

"Right when he started performing his first song, I looked at my boyfriend and said, 'We have to get out of here.' He said, 'I can't -- we can't,'" Eskins recalled.

"And I just remember looking up and passing out," and then going in and out of consciousness, she said. She remembers being pulled over a fence, and ultimately waking up for good in a chair, she said.

The deadly surge came hours after at least one person was injured when people rushed through a VIP entrance to the event in the afternoon.

And it came two years after three people were trampled and injured at the same festival as many rushed to enter in 2019.

Friday's horror brought an early end to what was supposed to be a two-day event, as Saturday's portion was canceled. Astroworld was in its third iteration, having been launched by native Houstonian Scott in 2018 at the park, which used to be the site of the SIx Flags Astroworld.

More than 300 people were treated at a field hospital set up near the festival Friday, Peña said.

One of the patients hospitalized is 10 years old, and at last check was in critical condition, Peña told CNN Saturday morning.

Some of the patients were in cardiac arrest as they were taken to hospitals, Peña said. Further details about the injuries weren't immediately available. The causes of death will be determined by a medical examiner, he said.

The cause of the surge was not immediately clear and will be part of an investigation, Peña said.

There were several incidents Friday where Narcan, a drug used to treat narcotic overdoses, was administered, Peña said during Saturday evening's news conference.

In a statement on Twitter Saturday morning, festival organizers said "our hearts are with the Astroworld Festival family tonight -- especially those we lost and their loved ones," and they "are focused on supporting local officials however we can."

Scott separately said he is "absolutely devastated by what took place last night" in a statement posted to Twitter.

"My prayers go out to the families and all those impacted by what happened at Astroworld Festival," Scott's statement reads.

"Houston PD has my total support as they continue to look into the tragic loss of life," it continues. "I am committed to working together with the Houston community to heal and support the families in need. Thank you to Houston PD, Fire Department and NRG Park for their immediate response and support."

People who attended Friday's concert shared on social media the chaos that ensued after the deadly nighttime surge. Medical personnel were so overwhelmed with the injuries some audience members attempted to administer CPR.

Amper, one of the crowd members, said she saw a "girl lying on the floor near me, and we had random people doing CPR on this girl."

Houston police and event security staff stopped the concert "as soon as the situation got to the point where it was overwhelming the resources there," but by then "the damage had been done," Peña, the fire chief, said.

'Everyone just started pushing to the front'

The crowd got increasingly packed over a long period, Johnson said, who added eventually "you just feel like there's a weighted blanket on you."

Rodriguez said he was about 50 feet from the stage when "everyone just started pushing to the front."

"It was so hard to breathe up there; you just have to wait until it pushes back, because if it (the crowd) gets pushed forward, it's likely going to get pushed back," Rodriguez said.

"When you get pushed back, people always fall over," he said.

Amper, one of the other concertgoers, said she's been to the two previous Astroworld events, and it's not unusual for a crowd to "rage" when Scott appears.

"Everyone pushes everyone," she said.

Investigators will review video of the scene and look at how the venue was laid out and whether it had enough exit points, Peña said.

The investigation will explore "what caused, one, the issue of the crowd surge, and two, what prevented people from being able to escape that situation," Peña said.

Houston's emergency management office established a hot line for people who haven't been able to contact those known to have attended the concert.

Earlier in the day, video from CNN affiliate KPRC showed numerous people rushing through a VIP entrance at the event -- knocking over metal detectors and sometimes other people, and ignoring security staff.

The video showed some people helping a few others up. Peña said he didn't know what caused the rush, either.

"We do know that we had people jump the fence," and at least one person was injured in the afternoon rush, Peña said.

In 2019, three people were trampled and hospitalized as thousands rushed to get into the festival.

CNN asked Peña whether the instance led to special precautions at this year's event. "It's obvious that if they did, they weren't enough," Peña responded.

This year's festival was slated to feature artists including SZA, Bad Bunny and 21 Savage.

Houston's mayor offered condolences on Twitter to the loved ones of those killed.

Authorities are looking into "everything" to find out what happened, Turner, the mayor, told CNN's Fredricka Whitfield on Saturday.