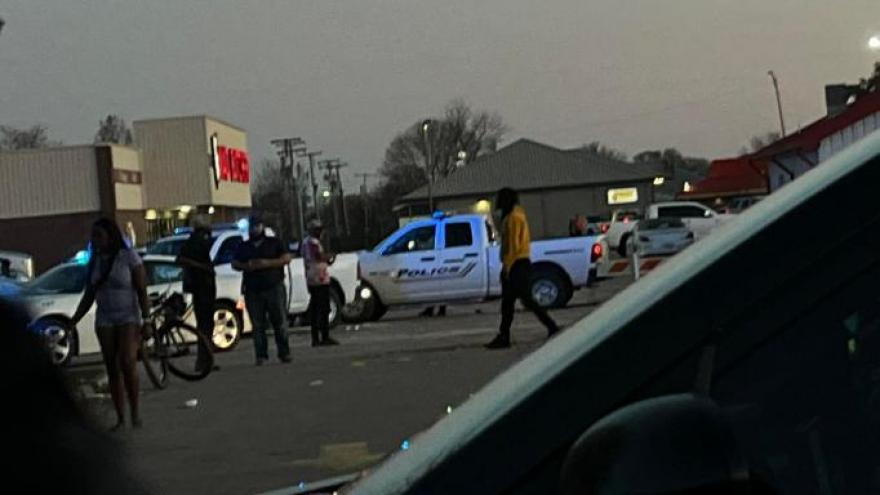 Police say they are hunting two suspects after gunfire broke out March 19 at a car show in Dumas, Arkansas, killing one person and injuring at least 28, including several children.

(CNN) -- The largest-scale US mass shooting in more than two years unfolded over the weekend, one of at least nine mass shootings that left eight people dead and more than 60 others hurt as the nation grapples with a rise in gun violence and crime.

At a car show in Dumas, Arkansas, one person was killed and at least 27 injured -- the most people wounded in a mass shooting event in the US since a shooter in 2019 targeted shopping centers in Odessa and Midland, Texas, just weeks after a massacre at a Walmart in the same state, according to the Gun Violence Archive.

More than two-thirds of the country's most populous cities recorded more homicides in 2021 than the previous year, with at least 10 setting all-time homicide records -- with the majority committed with a firearm, according to a CNN analysis of police department data.

The Biden administration in recent weeks redoubled its focus on combating gun crime, even as lawmakers in at least seven states have forged ahead -- often against the advice of enforcement officials and advocacy groups -- with bills that would allow citizens to legally carry concealed guns in public without firearm training or a license.

Here is a snapshot of the recent weekend's spate of mass shootings, from Friday afternoon to Sunday:

A drive-by shooting Friday night in New Iberia, Louisiana, injured five people, among them a 7-month-old, according to the local police department.

Police officers responded around 9:30 p.m. (10:30 p.m. ET) to a shooting in the 200 block of C V Jackson Drive, the department said in a statement. Three people suffered non-life-threatening injuries, while two others, including the infant and an adult, were hospitalized in critical condition.

The infant was in stable condition Monday and scheduled to have surgery, police said. The adult lost her left eye as a result of the shooting and had been released from the hospital.

Two people were killed and three others wounded in a shooting early Saturday in downtown Norfolk, Virginia, police said.

Virginian-Pilot newspaper reporter and former CNN news assistant Sierra Jenkins, 25, was among those fatally shot, police said. She was leaving a downtown restaurant, Chicho's Pizza Backstage, when an argument started outside, followed by gunfire.

Officers responded around 2 a.m. ET and found Jenkins and two men with life-threatening gunshot wounds. One of them, 25-year-old Devon M. Harris, was pronounced dead at the scene, and the other man was taken to a hospital, police said in a news release.

Jenkins was "a bright and talented woman with so much promise," said the Virginian-Pilot's editor-in-chief, Kris Worrell. "Her passion for journalism was undeniable and our community is better because of her reporting. She brought both energy and empathy to her work as an education reporter."

"To have the life of such a talented young person cut short is devastating," Worrell added. "Our thoughts are with Sierra's family and all those who knew and loved her. We are absolutely heartbroken."

Killed was T'Khira Monique Browley of Lynchburg, which sits just across the James River from Madison Heights, Viar said.

No arrests have been made. Anyone with information is asked to contact authorities.

One person was killed and 27 hurt Saturday when "gunfire swept across a crowd attending a local car show" in Dumas, about 80 miles southeast of Little Rock, the Arkansas State Police said.

The Dumas Police Department was searching for two more suspects in connection with the shooting and had one person in custody on unrelated charges, Col. Bill Bryant of the state police said.

The shots were fired just after 7 p.m. (8 p.m. ET) at the car show, which was hosted by the Hood-Nic Foundation and Delta Neighborhood Empowerment Organization, a group providing educational programs and support for Dumas-area youth, according to its website.

Authorities earlier said 28 people were injured but on Monday said one was counted twice.

Four teenagers were shot -- one fatally -- after a fight broke out Saturday night in a parking lot outside a 16th birthday party in Texas' most populous city.

Police responded to a Houston production studio around midnight after people were involved in a dispute that escalated into gunfire, Harris County Sheriff Ed Gonzalez tweeted.

As many as 100 people were involved in the fight when the shooting began, according to CNN affiliate KHOU. "A large number of spent shell casings were discovered in multiple areas of the parking lot," the Harris County Sheriff's Office said in a Sunday news release.

A 17-year-old male was pronounced dead at an area hospital, according to Gonzalez.

Two other 17-year-olds were taken to the hospital, including one by LifeFlight to Texas Children's Hospital, according to the sheriff's office. The other was treated and released, then taken into custody on an unrelated warrant, the sheriff's office said.

A 14-year-old girl was treated for non-life-threatening injuries at a hospital, the sheriff's office said.

No suspects have been identified and the cause of the fight that led to the gunfire is unknown, according to Gonzalez.

Three people were killed and three others wounded Saturday in a shooting at a Fayetteville, North Carolina, hotel.

The incident took place just before 9 p.m. ET at the Baymont Ramada, the Fayetteville Police Department said on Facebook. The hotel is about 10 miles south of Fort Bragg.

William Franklin Davis, 42, died at the scene, and two others -- Keith Allan Dickey, 37, and Donald Dillenbeck, 49 -- died at the hospital, police said. Three others were still being treated for gunshot wounds.

"Detectives have determined the shooting is not random," the police department said, urging anyone with information to come forward.

At least 10 people were wounded, one of them critically, in a shooting Saturday night in Dallas, according to Dallas Police Department spokesperson Brian Martinez.

Police responded to reports of a shooting in the 5200 block of Botham Jean Boulevard around midnight, Martinez told CNN in an email Sunday.

An undetermined number of others were injured trying to get away from the shooting scene, Martinez said.

Police cautioned information is limited and the investigation is ongoing.

Four people were shot Saturday night in downtown Austin, Texas, during the final weekend of the SXSW festival in an incident stemming from "a disturbance between two groups of people" that is not believed to have been a random act, the Austin Police Department said.

Police described the injuries as "minor," according to Twitter. The shooting erupted near Neches and 6th streets, in the capital's entertainment district, Austin-Travis County EMS tweeted early Sunday.

Police were on patrol near East 6th Street's Toulouse Bar when they heard "several gunshots coming from that area," according to a series of tweets on the police department's verified Twitter account.

A suspect was in custody by midmorning Sunday, the police department tweeted. Neither the suspect's name nor a motive were released, with police citing "the ongoing investigation."

Four people were shot in Milwaukee early Sunday when a suspect or suspects "fired several shots during an argument" at a party, according to the Milwaukee Police Department.

Police are still looking for "unknown suspects," the statement said.