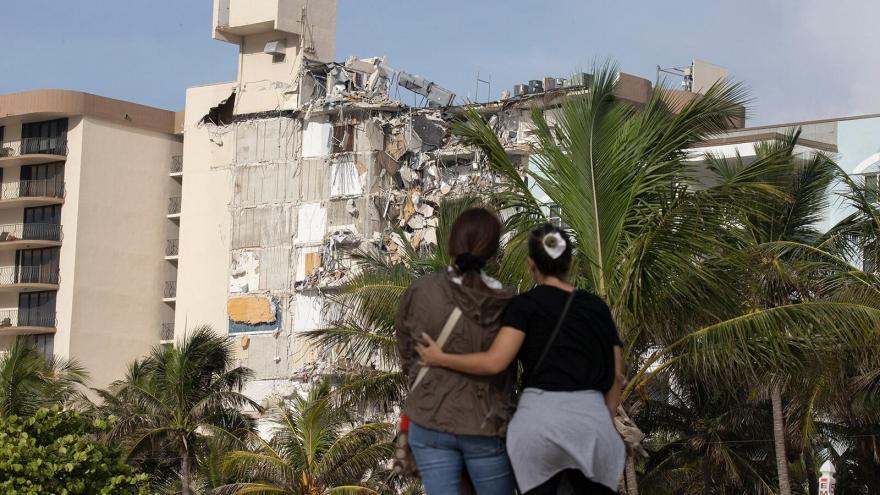 It came the same day as CNN learned that a town building official told residents in November 2018 that the building was "in very good shape," just days after receiving a report that warned of "major structural damage" to the tower involved in the collapse.

Rescue crews have been sifting through a mountain of rubble since Thursday morning, hoping to find those missing.

Four more of the dead have been identified, Miami-Dade Mayor Daniella Levine Cava said at a news briefing Sunday evening. A total of 134 people have been accounted for and 152 remain unaccounted for, she said.

The search crews had been stymied by a fire and the constant threat of further collapse where 55 of the 136 units of Champlain Towers South crashed to the ground.

The fire and smoke were under control as of Sunday, the mayor said, and the good weather allowed for the rescue teams to "move forward without some of the previous challenges that we have faced."

"So we continue to sweep the mound, with our canines, using all of the technology available to us and machinery to lift the debris," Levine Cava said.

Condo association was told the building was in 'very good shape' in 2018, report says

Rosendo Prieto, the Surfside building official at the time, told the building's condo association at a November 2018 meeting that the tower was in "very good shape," NPR reported Sunday, citing minutes from the meeting that it obtained.

Two days before the meeting, Mara Chouela, a member of the condo board, forwarded a copy of a structural engineer's report to Prieto that warned of "major structural damage," according to an email released by the town on Saturday.

"Structural engineer report was reviewed by Mr. Prieto," the minutes cited by NPR said, in an apparent reference to a 2018 report from structural engineer Frank Morabito, which detailed cracking and dilapidating concrete in the parking garage underneath the tower, among other significant issues. "It appears the building is in very good shape," the minutes noted, according to NPR.

Prieto no longer works for Surfside and currently serves as the interim building official for Doral, another city in Miami-Dade County, according to the Doral website and a county document. Prieto has not responded to requests for comment from CNN.

A resident of the condo, Susana Alvarez, told NPR that she attended the Nov. 15 meeting and remembered a representative of the town saying, "the building was not in bad shape."

Emails released by the town confirm Prieto attended the meeting.

The day after the meeting, Prieto sent another email to Guillermo Olmedillo, the former town manager, saying the condo board meeting "went very well."

"The response was very positive from everyone in the room," Prieto wrote in the November 16 email, which was released by the town Sunday evening. "All main concerns over their forty year recertification process were addressed."

He wrote that the building -- which was built in 1981 -- didn't have to start the recertification until 2021, "but they have decided to start the process early which I wholeheartedly endorse and wish that this trend would catch on with other properties."

The structural engineer's report pointed out concerns about structural damage to the concrete slab below the building's pool deck and "cracking and spalling" located in the parking garage, according to documents.

The waterproofing below the pool deck and entrance drive was failing and causing "major structural damage," according to the report by Morabito of Morabito Consultants.

The report didn't indicate whether the structure was at risk of collapse.

In a statement to CNN, Morabito Consultants said that they "provided the condominium association with an estimate of the probable costs to make the extensive and necessary repairs. Among other things, our report detailed significant cracks and breaks in the concrete, which required repairs to ensure the safety of the residents and the public."

Abieyuwa Aghayere, a professor of structural engineering at Drexel University who reviewed the report, said its findings were alarming and should have spurred further review of the building's integrity.

"It's a strategic process. We can't have one squad working right on top of another. So we have to space out. We have to have different components. So at one time, I think we have over 200 people working on that debris site."

Israel and Mexico are both helping with the search efforts, officials said.

Crews have cut a deep trench, 125 feet long and 40 feet deep, to help in the search efforts.

"This trench is very critical to the continuation of the search and rescue process," the mayor said. "We continued all night to build that trench, and as a result of that, we were able to recover four additional bodies in the rubble, as well as additional human remains."

When asked to describe the findings so far from the trench, the fire chief said they were "horrific" -- partly because of a lack of voids, or spaces where people may be safely trapped.

"We don't have the voids that we are hoping for, things that we are looking for," Cominsky said. "We are still looking. So that's what I mean by horrific. It's just a difficult, difficult situation."

But rescuers have not given up on finding survivors.

"We work hour after hour, hoping, because this is what we do -- we save people," Maggie Castro of Miami-Dade Fire Rescue said Sunday.

"We want to bring the family members back to their families. And when we come up empty-handed, it's difficult for us as well."

While families hold on to hope for the dozens still missing, officials are trying to both support them and prepare them for the worst.

"We've also talked with them about the developments, for example with the body parts -- finding body parts," said Levine Cava, who was meeting with family members until about midnight Sunday morning.

"Obviously that's a very sobering bit of news. And they are understanding that that is a possibility. So we are talking through what that means, how is the DNA evidence taken, what's happening with the medical examiner, how they will be notified."

Sunday's death toll is an increase from the five deaths that had been confirmed Saturday.

Only one of the victims has not yet been identified.

Many families have lauded the rescue workers risking their own safety to find the missing loved ones. But some have directed their anger toward those leading the search efforts.

"Imagine if your children were in there," the mother of a missing 26-year-old woman told state and local officials as they met with the families.

"I know you're doing everything you can, but it's not enough."

Castro said she understands why some families are channeling their anger and anxiety toward the same people who are trying to help.

"They don't have anywhere to place these emotions right now, because there's a lot of them. And it's OK. If they need to direct them at us, we're more than willing to handle it. We understand that they have to let this emotion out somewhere," Castro said.

"I can't even imagine being in a position, the position that they are in -- not knowing, feeling helpless as to not do anything themselves."

While the odds of survival might dwindle each day, search crews are still in an active rescue mission, Castro said.

"We are going to go through this entire rubble pile until there is nothing else to go through. And at that point, then we may have to consider going to recovery mode," she said.

"We are not going to go into a recovery mode until we have exhausted every possible measure of finding anyone in this rubble."

Family finds a birthday card in the debris

Hilda Noriega, 92, is among those missing, her grandson Michael Noriega told CNN. Noriega and other family members rushed to the site when they heard early Thursday morning that something had happened there.

Standing among debris from the crash that morning, Michael Noriega's father found a birthday card given to Hilda by friends, and another family member found two photos of her, including one of Hilda and her husband on vacation.

"These were very beautiful to find," Michael Noriega said.

"She's just so vibrant, full of energy, extremely independent. She's probably the most popular person that I know, just tons of friends," he said. "And she lives her life with her faith first, her family, second, and her friends, third.

"She's so full of life, especially for her family she really, really lives for us, and so we're living for her right now," he said.

Families of those missing or killed were able to visit the site on Sunday, the mayor's office said. They were taken by bus to the scene.

"It is a private and deeply emotional moment for the families," a spokesperson for the mayor's office said.

Local official vows legislation 'so this will never happen again'

The cause of the collapse has not been confirmed.

But Miami-Dade County Commission Chairman Jose "Pepe" Diaz said once that happens, "I am guaranteeing you legislation will be taking place so this will never happen again. Ever. Because nobody could have ever thought this will happen here."

Surfside building officials did a cursory review of the structure of the nearby Champlain Towers North and East and "didn't find anything that was out of order," Burkett said Saturday.

"So that's reassuring, but that is not a deep dive," he said. "We are going to do a very deep dive into why this building fell down."

If residents living in Champlain Towers North and East want to evacuate, they can, Burkett said.

The mayor noted they are working with federal officials on relocation options.

The city of Miami Beach -- just steps away from the condo building in Surfside -- declared a state of emergency Sunday.

"A significant portion of the staging for the emergency response efforts is taking place in Miami Beach," the city said in a news release.

The declaration ensures the city will be eligible to get reimbursed for emergency-related expenditures associated with the collapse.

That declaration authorizes the Federal Emergency Management Agency to coordinate disaster relief efforts, reimburse response costs, provide equipment and resources to assist with debris removal and protective measures to try to save lives and to provide temporary shelter and housing for those who have been displaced, the White House said.