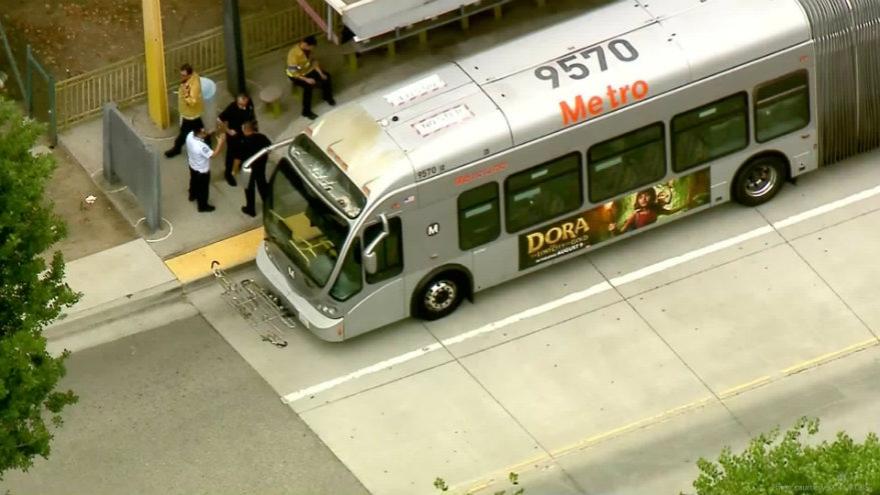 (CNN) -- At least four people were shot dead and two others were wounded Thursday in Los Angeles before the gunman was captured, authorities said.

Gerry Dean Zaragoza, 26, killed his father and brother at their home, fatally wounded a woman he knew at a gas station and shot a man on a bus who died, police said.

There is no obvious motive for any of the killings, said Capt. William Hayes of the Robbery-Homicide Division of the Los Angeles Police Department.

"We're evaluating it, we're interviewing witnesses but we can't come up with a specific answer," he told reporters.

Hayes said the shootings began at about 1:20 a.m. in Canoga Park when Zaragoza shot his parents and brother. Zaragoza's father and brother were killed and his mother injured, Officer Greg Kraft said.

About an hour later, Zaragoza went to a gas station in North Hollywood, where he shot a woman and a man who were working there, Hayes said.

Hayes said Zaragoza knew the woman previously. She died at a hospital. Hayes said the man survived; police had said earlier that the victim was in critical condition.

Police also think Zaragoza is responsible for an attempted robbery near an ATM at a bank and for a fatal shooting on a bus at a stop in Van Nuys.

"He didn't do anything. He was just sitting on the bus," a witness told CNN affiliate KABC about the victim.

Another witness on the bus told CNN affiliate KCAL/KCBS he had a close encounter with the gunman as people fled the scene in a panic.

"The guy ... ended up coming towards me and basically once he started comng towards me -- he actually like still had the gun out," Carlos Hurtado de Jesus said. "I started going around the bus and ended up seeing him leave and put the gun away.

He was arrested about 2 p.m. by investigators in street clothes with a minor struggle, Hayes said.

Zaragoza had a handgun, the captain said.

"We're deeply saddened by the loss of life and I've deployed my Crisis Response Team ... to support families impacted by the tragedies," Mayor Eric Garcetti tweeted.