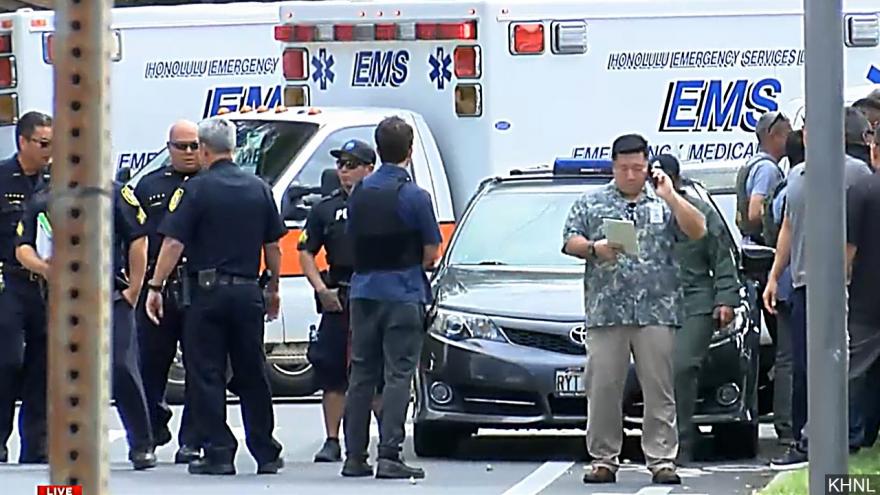 (CNN) -- At least two Honolulu police officers were killed in a shooting Sunday morning in the Diamond Head area, according to CNN affiliate Hawaii News Now.

The station reported the suspect in the shooting apparently set a home on fire on Hibiscus Drive.

Honolulu Police said the area of Hibiscus Drive was closed because of a police investigation. Video from Hawaii News Now showed several homes on that street engulfed in flames.

Honolulu's mayor and the state's governor confirmed the death of the two officers. CNN has not independently confirmed the details of the incident provided by Hawaii News Now.

One witness told Hawaii News Now he heard about 20 shots followed by several more after some time.

Ian Felix, a witness, told Hawaii News Now he recalled seeing a woman bleeding near the house where the shooting occurred as he walked with his mother.

"She was screaming," Felix said of the injured woman who was bleeding from her leg.

Felix said he helped perform first aid on the woman until an officer arrived and put a tourniquet on her leg.

After hearing gunshots, Felix said he and another person carried the injured woman across the street into the garage of another home and then later to an ambulance.

Felix said he believes one of the female officers was fatally shot.

Earlier, FBI Honolulu Operational Support Technician Derek Hayes told CNN the FBI was responding to an "active shooter" in Honolulu. Agents with the Bureau of Alcohol, Tobacco, Firearms and Explosives also responded to the active shooter situation, the agency said on Twitter.

"This is an unprecedented tragedy for not only the City and County of Honolulu but the entire state of Hawai'i," Caldwell wrote.

In a statement, Ige said the state is grieving.

"Our entire state mourns the loss of two Honolulu Police officers killed in the line of duty this morning. As we express our condolences to their families, friends and colleagues, let us also come together to help and support those who have been forever changed by this tragedy," the statement said.