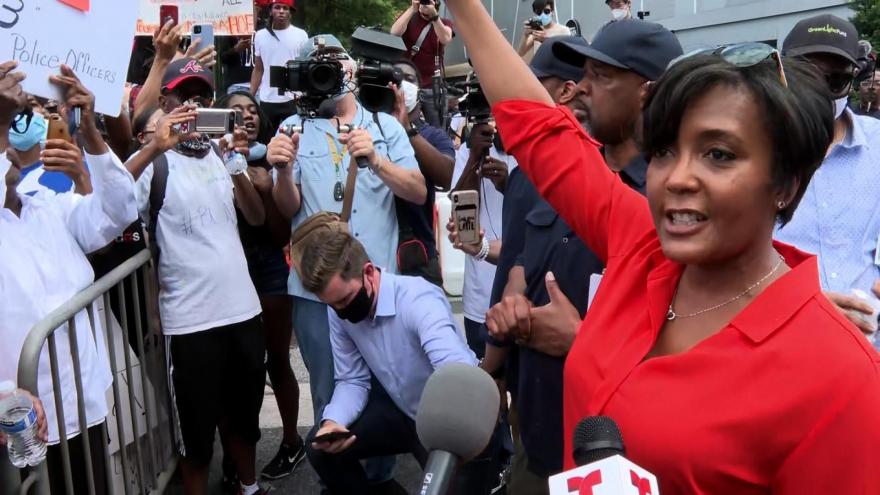 (CNN) -- Atlanta Mayor Keisha Lance Bottoms, one of the top prospects to be presumptive Democratic presidential nominee Joe Biden's running mate, said Monday that she has tested positive for Covid-19.

"COVID-19 has literally hit home. I have had NO symptoms and have tested positive," the mayor said on Twitter.

She told CNN's Chris Cuomo that she received the news that both she and her husband were positive just before 6 p.m. ET on Monday. She said they decided to get tested because her husband had been sleeping more than normal since last Thursday.

"I'm still in a state of shock because I don't have any idea how we were exposed," she said, noting that she initially thought her husband's symptoms, and her own of a mild headache and dry cough, were due to allergies. "I'm stunned."

When Cuomo, who contracted the virus himself this spring, asked if her husband had a fever, Bottoms said he had a low-grade fever of 99 degrees but also was experiencing "Cuomo dreams," feverish hallucinating dreams the anchor had spoken about during his illness.

One of Bottoms' four children has also tested positive, with another testing negative, the family has learned. All four of her children have asthma, a preexisting condition that the US Centers for Disease Control and Prevention say may worsen Covid-19 symptoms.

The mayor added that her diagnosis highlights how contagious the virus is.

"This is scary. We've done all the things that we thought we should do, and for us to still test positive, I think, really speaks to how easily this virus is spread and obviously none of us are immune from it," she said.

Coronavirus cases have been steadily rising around the US, with the nationwide total of cases topping 2.9 million on Monday, according to Johns Hopkins University's tally. More than 130,000 people have died in the United States, the university has found.

A mayor that has risen in the national spotlight during both the racial reckoning roiling the country and the fight to contain the coronavirus, Bottoms has seen her standing among the women being considered to be Biden's running mate grow in recent weeks.

Bottoms has leaned into the prospect of becoming Biden's running mate.

When CNN's Jake Tapper last month asked Bottoms if she was ready to be president, she bluntly said, "Yes."

"There's been no handbook for so many mayors and so many governors across this country dealing with Covid-19 and now with the demonstrations that we are seeing around the country," she said in the late June interview. "I think that there has been a response to crisis that not many people have been tested in this way in the same way that leaders across this country have been over the past several months."

But asked Monday how her diagnosis will impact her job running her city, Bottoms said she remains committed to Atlanta.

"I'm a mayor but I'm also a mom and a wife, so I've got to wrap my brain around what exactly this means and how do I keep all of my kids, the rest of my kids, safe," she said.

This story has been updated with more details about Bottoms' diagnosis, her Biden running mate prospects and more comments from Bottoms.