Attack on civilian employee of Baltimore police captured on video 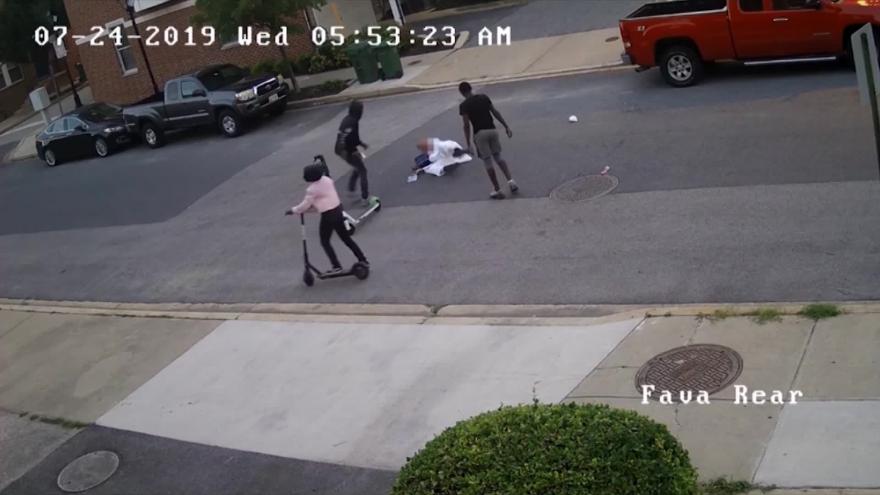 (CNN) -- Authorities in Baltimore are looking for three suspects in connection with an attack on a civilian employee of the Baltimore Police Department that was captured on a surveillance camera and sparked outrage.

The 59-year old victim can be seen in the surveillance footage crossing Albemarle Street as he is approached by two men and one woman, two of whom are on scooters. The footage shows the three assaulting the man, knocking off his headwear, beating him and then, police say, taking the keys to his vehicle.

Investigators believe the suspects stole the victim's vehicle, which was parked on the same block, a police press release said.

The video brought anger across the city, including from Zainab Chaudry, director of Maryland outreach for the Council on American-Islamic Relations (CAIR). She said the robbery may be "a possible hate crime in which the victim's religious head covering was forcibly removed before he was knocked to the ground."

Chaudry noted that the timing of the attack and the victim's religious attire indicate that he may have been returning from a morning prayer service.

The Baltimore police statement did not describe the attack as a possible hate crime.

CNN affiliate WBAL said the victim, a police crime lab technician, was released from the hospital and was recovering at home.

A reward of up to $32,000 is being offered in the case, the police department said in a tweet. Of that total, the FBI and the ATF, who have joined the investigation of the incident, each put up $5,000 for information on the identity of each suspect in the released video. Metro Crime Stoppers put up $2,000, the Baltimore police news release said. And CAIR has offered $1,000 for information leading to arrest and conviction of the suspects.