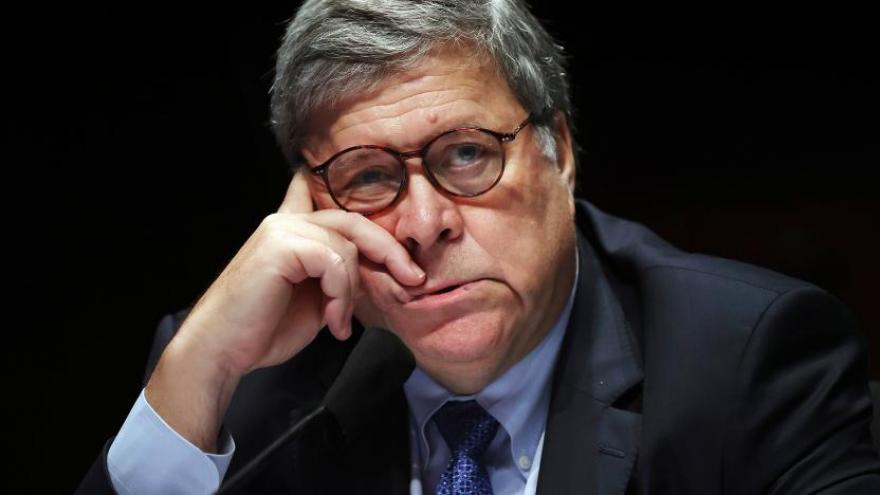 In this July 28, 2020, file photo, Attorney General William Barr appears before a House Judiciary Committee hearing on the oversight of the Department of Justice on Capitol Hill in Washington. He is considering leaving his post before President Donald Trump exits the office.

(CNN) -- Attorney General William Barr is considering leaving his post before January 20, the day President Donald Trump leaves office, a source with knowledge of the matter confirmed to CNN.

The source confirmed that Barr is not happy with Trump, writing that Barr "is not someone who takes bullying and turns the other cheek!"

"He has not made a final decision," the source said.

The New York Times was first to report on Barr's thinking. CNN has reached out to the Justice Department for comment.

CNN reported earlier this week that Trump was frustrated with Barr for saying in an interview that the Justice Department had found no evidence of widespread election fraud. The two men had a "contentious," lengthy meeting inside the West Wing on Tuesday, according to a person familiar with the meeting.

On Thursday, Trump declined to say whether he had confidence in Barr, a sign that the attorney general has fallen out of the President's favor.

"Ask me that in a number of weeks from now. They should be looking at all of this fraud," Trump told reporters in the Oval Office.

Two White House officials told CNN that while Trump had certainly considered firing Barr, he's being advised against it by several people.

A former attorney general under President George H.W. Bush, Barr came out of semi-retirement in 2019 to take over the top job at the Justice Department after Trump dismissed former Attorney General Jeff Sessions from the role. Trump forced Sessions out in 2018 after Sessions recused himself from matters related to the 2016 campaign, including the investigation into Russian interference in the 2016 election.

Barr has faced accusations that he has politicized the Justice Department to defend Trump, by involving himself in the sentencing for Trump's friend Roger Stone and dropping federal charges against former national security adviser Michael Flynn.

Trump has refused to concede the 2020 presidential, falsely claiming the election was riddled with fraud and stolen from him when more people voted for President-elect Joe Biden.

Referring to allegations against Dominion and other voting software used in the 2020 election, Barr told the Associated Press, "There's been one assertion that would be systemic fraud and that would be the claim that machines were programmed essentially to skew the election results. And the DHS and DOJ have looked into that, and so far, we haven't seen anything to substantiate that."

This story has been updated with previous reporting.