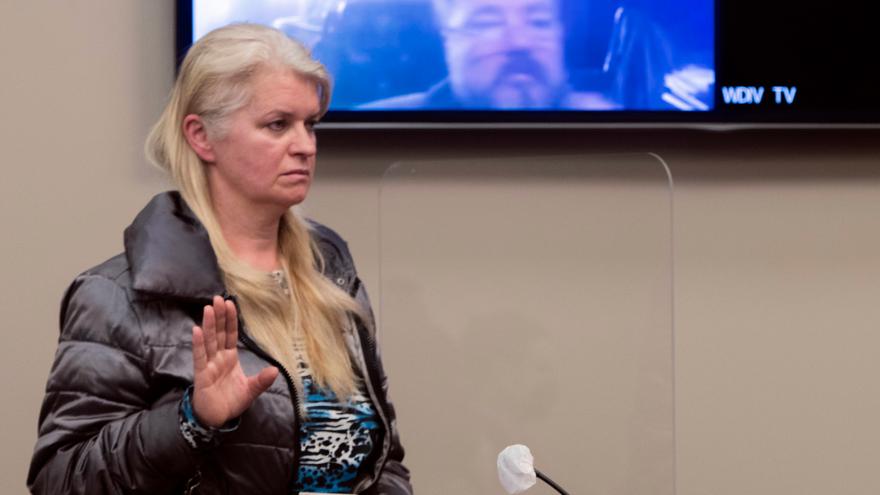 Marlena Pavlos-Hackney holds up her hand during her arraignment at the 30th Judicial Circuit Court in Lansing, Michigan on March 19. - Nicole Hester/AP

(CNN) -- A Michigan pizzeria owner was taken into custody early Friday morning after she "continued to willfully violate the state's food laws, public health orders and a court-ordered Temporary Restraining Order" related to Covid-19 measures, according to the state's attorney general.

Marlena Pavlos-Hackney, 55, the owner of Marlena's Bistro and Pizzeria in Holland, was arrested without incident following a traffic stop in Ottawa County on Friday, according to a release from Michigan Attorney General Dana Nessel.

The Michigan Department of Agriculture and Rural Development suspended her food establishment license on January 20, 2021 but the restaurant continued too operate, according to the release.

An administrative law judge upheld the suspension in February, saying Pavlos-Hackney "knowingly has not complied with both local and state health department requirements that were established to prevent the spread of COVID-19 to employees, customers, and the community."

The Allegan County Health Department issued a notice to the public on Friday, informing them about their potential exposure to Covid-19 at the restaurant, Attorney General Nessel said.

"This owner has continued to willfully violate the state's food laws, public health orders and the order of the court -- a dangerous act that may have exposed dozens of diners and employees to the virus following the discovery that one of Marlena's customers tested positive for the virus within two days of eating there," Nessel said.

CNN has reached out to Pavlos-Hackney's attorney for comment but has not heard back.

According to Nessel's news release, Michigan State Police advised Pavlos-Hackney on March 11 that a warrant for her arrest had been issued. She was advised to turn herself in by March 18 but failed to do so.

After her arrest Friday morning by Michigan State Police, Pavlos-Hackney was transported to Ingham County Jail, where she will be held while she awaits court proceedings, according to the release.