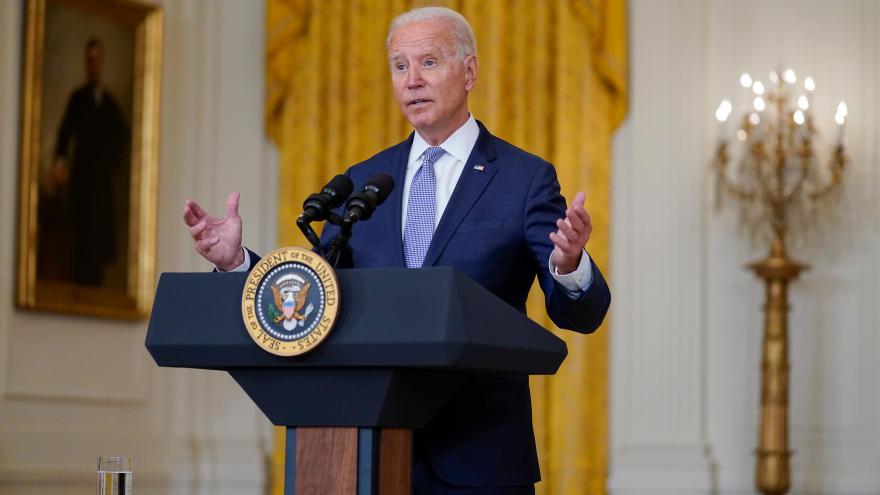 It's a far cry from the celebrations of July, where the White House sought to declare independence from the virus and Biden formally announced that US troops would fully withdraw from Afghanistan by August 31. How the President responds to this moment could be critical to his legacy, and -- in the shorter term -- his party's hopes for the midterm elections.

August is a historically challenging month for the first year of any administration, a time when presidents often experience a decline in poll numbers. Biden is no exception, experiencing a slight dip in his approval rating, as questions bubble up over how Americans will perceive his handling of these issues in the coming months.

The numerous challenges facing the White House underscore the pressure on the President to respond and communicate effectively, particularly heading into the coming months, when the race for control of Congress in the 2022 midterms will begin in earnest. In a sign of how critical the White House views this moment, Biden cut short a planned vacation in Delaware this week, opting to return to the White House Tuesday through Thursday.

The President resumed that regularly scheduled vacation by spending Thursday night in Delaware before taking off for a weekend at the presidential retreat at Camp David.

But Biden received additional briefings on Afghanistan throughout the day Friday from his national security team, a White House official confirmed to CNN on Saturday, and the traditional August relaxation time will be interspersed with regular briefings on the situation there.

Afghanistan's future hangs in the balance

The security situation in Afghanistan has quickly deteriorated in recent days as the Taliban made major gains, with administration officials taken aback by the pace of the offensive.

Overnight Thursday, the Taliban took control of the city of Kandahar, the second largest city in Afghanistan. The Taliban has taken control of 17 provincial capitals in the last week.

The US began sending 3,000 troops to Afghanistan Friday to help draw down personnel from the American Embassy in Kabul, a plan formed by senior members of Biden's national security team and signed off on by the President early Thursday.

After his remarks in the East Room on July 8 laying out a vehement defense of his decision to withdraw US troops, Biden was asked if a Taliban takeover was inevitable.

"No, it is not," he said. "Because you have the Afghanistan troops -- 300,000 well-equipped (troops), as well equipped as any army in the world, and an air force against something like 75,000 Taliban. It is not inevitable."

He later added, "The jury is still out. But the likelihood there's going to be a Taliban overrunning everything and owning the whole country is highly unlikely."

Since then, Biden has remained steadfast in his decision to withdraw, telling reporters earlier this week that he did not regret his decision and it was time for Afghans to "fight for themselves." The deterioration has bolstered Biden's thinking in many ways, and he will continue to be briefed over the weekend at Camp David by his national security situation team.

But while US withdraw is largely a popular decision at home, the pace of the Taliban takeover -- and the looming collapse of an Afghan government that took two decades to build, with the backing of thousands of US troops -- is becoming an increasingly large headache for the administration. The crisis could shape Biden's foreign policy legacy, particularly the human rights implications for Afghan women and girls should the Taliban once again take control of the nation.

The administration has also had to confront an alarming new front in the battle against Covid-19, with surging cases, hospitalizations and deaths driven by the Delta variant.

One month ago, just 19% of Americans lived in an area of "high" or "substantial" risk of Covid-19 community transmission. That number is now above 98%, with looming concerns about what the fall could bring for the pandemic's spread as Americans head indoors again.

In the past week alone, the seven-day average of new cases is up 26% and new deaths are up 18%, per data from Johns Hopkins University.

The surge has forced Biden and his team to renew its focus on pandemic response, something they thought they had largely, and successfully, put in the rearview mirror. Just weeks after the US Centers for Disease Control and Prevention provided relaxed mask guidance, the ferocious spread of the Delta variant forced the CDC to recommend that vaccinated people once again mask up in late July. In recent days, the administration has sought to build momentum for vaccine mandates in the federal government, states and localities, and the private sector.

Biden and top public health officials have repeatedly cast the latest developments as a "pandemic of the unvaccinated," and the administration is in an urgent race to vaccinate as many people as quickly as possible amid the threat of other variants and breakthrough cases. The administration fell short of its goal to have 70% of Americans at least partially vaccinated by July Fourth, reaching the milestone on August 3. As of this week, just over 50% of Americans are fully vaccinated, per the CDC.

In a positive development, the pace of vaccinations is back on the rise, with about half a million people getting newly vaccinated every day, "for the first time since mid-June," per White House Covid-19 response coordinator Jeff Zients. Zients told reporters this week that the most significant progress in vaccinations is happening "in states with the highest case rates."

Thursday night, the US Food and Drug Administration authorized booster shots for some immunocompromised Americans, with guidance for the rest of vaccinated Americans expected in September. In the coming weeks, the White House will have to navigate key logistical, roll out, and messaging challenges on booster shots.

'Infrastructure Week' set to stretch on for months

Biden's week began with a major legislative victory for his domestic agenda as the Senate passed a $1 trillion bipartisan infrastructure package, a rare bipartisan feat that was the product of months of negotiation between the White House and Capitol Hill.

Senate Democrats also stayed unified to adopt the $3.5 trillion budget resolution early Wednesday morning, a critical step forward in the push for the second piece of Biden's sweeping agenda. The second bill, which Democrats will spend the coming weeks hammering out the details on, is packed with progressive priorities and some of Biden's most transformative economic proposals.

But the progress forward also laid bare just how fraught the legislative high-wire act ahead will be for Biden and Democrats.

House Speaker Nancy Pelosi has a delicate balancing act to keep the moderate and progressive wings of her caucus in line, calling the House back into session from recess the week of August 23 to take up the budget resolution. But at the moment, aides say, she simply does not have the votes to move it forward. Moderates are pushing her to change course and allow the House to vote first on the bipartisan piece of the infrastructure agenda, with nine Democrats threatening to withhold support for the budget resolution in a letter to Pelosi Friday.

White House officials remain confident in the prospects and plan to maintain a posture they've had for months -- keeping their heads down and pushing forward, according to one senior White House official. Biden himself has the utmost faith in Pelosi's abilities, the official noted.

Still, the moderates growing louder underscores the balancing act facing Pelosi, who has a very narrow margin of error and can only afford to lose three Democratic votes on the two signature pieces of infrastructure legislation.

A key Bureau of Labor Statistics report out Wednesday found that consumer prices rose 4.3% in the 12 months ending in July, with prices rising 0.5% from June to July. Biden officials have argued that the inflation worries are short-term, and that July's numbers, while still high, did show deceleration compared to months prior.

But there has been a concerted messaging shift from top White House officials, including the President, in recent weeks to address the issue head on. Officials acknowledge inflation fears have increasingly shown up in polling as something Americans view as a growing concern. It has become a potent political weapon for Republicans, GOP campaign officials say -- something they have made clear needs to be a message they hammer Democrats on in the months heading into the midterms.

Biden has now used multiple speeches to address the issue -- and make clear that, in the view of his economic team, his sweeping infrastructure and social safety net agenda will create conditions to reduce price increases, not exacerbate them.

There are also major concerns about the debt limit ahead, a high-stakes game of chicken coming this fall as the nonpartisan Congressional Budget Office forecasts the federal government could run out of cash by October or November unless Congress raises the debt ceiling.

Senate Minority Leader Mitch McConnell has vowed that zero Republicans will vote to raise the debt limit, a politically toxic vote, and Democrats did not include provisions to do so in the reconciliation package, which could have been passed with a simple majority.

"Nope, they're not gonna let us default," Biden said. But all signs point to a major showdown when Congress returns from recess.

The Biden administration is also confronting a crisis on the US-Mexico border with a major surge of migrants arriving in the month of July, an unusual increase at a time when the pace generally slows due to the dangerous heat in the region.

"We are facing a serious challenge at our southern border, and the challenge is of course made more acute and more difficult because of the Covid-19 pandemic," Homeland Security Secretary Alejandro Mayorkas said Thursday in Brownsville, Texas.

Statistics released Thursday show 212,672 migrants were taken into US custody by US Customs and Border Protection in the month of July, up 12% since June and the highest monthly number of migrants detained at the US-Mexico border in two decades. While authorities have swiftly expelled more than 95,000 of those encountered in July, the uptick in arrests has strained federal and local resources.

The administration is taking steps to address the root causes of migration, laying out a plan in late July to tackle economic insecurity and inequality in Central America, among other issues contributing to migration. But those efforts will only show results in the long-term, with the latest surge posing a more urgent problem.

This story has been updated with additional reporting Saturday.