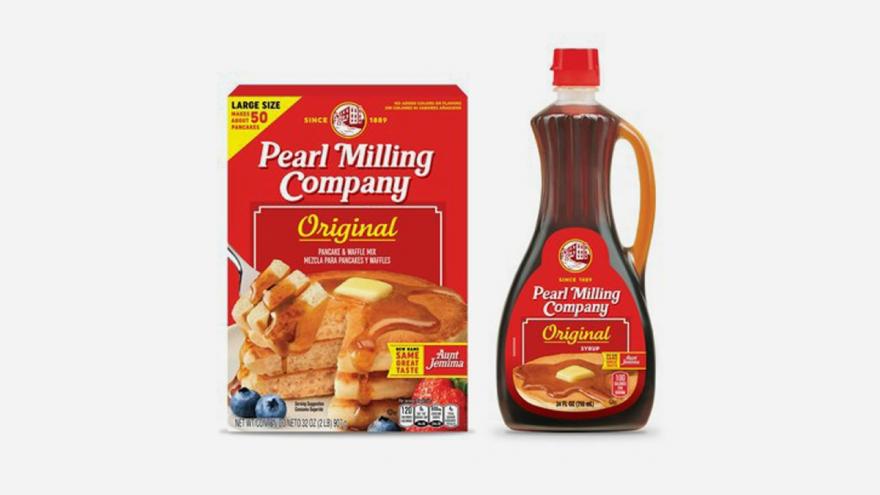 The new brand said breakfast products in its Pearl Milling Company packaging began to ship on May 31. The new packaging has the same red and yellow color scheme as Jemima's packaging did, but it replaces Jemima's image with a 19th century watermill, a callback to the company's 1889 founding.

PepsiCo. and its subsidiary Quaker Oats announced in February that they would rebrand Aunt Jemima as the Pearl Milling Company because of the former brand's racist origins.

Products in the new packaging will continue shipping over the next few months, the company said, so they're not available everywhere just yet.

"Retailers transition at different paces," the brand said. "We are working closely with our retail partners to get the new Pearl Milling Company packaging on shelves. ... People may still see some products under the old brand name as we work through the transition."

Where you can get Pearl Milling Company products

Amazon, Kroger and Meijer are currently selling Pearl Milling Company products online, but Walmart, Target, Albertsons, Food Lion, Publix, H.E.B., Shop Rite and Whole Foods are not yet offering them on their websites. A search for Pearl Milling Company on some retail sites redirects users to Aunt Jemima.

Walmart is still working to confirm details about the status of its Pearl Milling products. Albertsons confirmed it began receiving Pearl Milling Company pancake mix and syrup product on May 31.

"As the Aunt Jemima items sell out, they are being replaced with Pearl Milling items," an Albertsons Company spokesperson told CNN Business via email. "On-shelf timing will vary based upon product sell-through."

Food Lion says it expects Pearl Milling Company products to be in all 1,102 Food Lion stores by Sunday.

"Additional product is en route to stores that haven't yet received them," a Food Lion spokesperson told CNN Business via email. "The products will be available on our website once all stores are fully stocked. Some stores may still have a limited supply of Aunt Jemima products on shelves, as is customary with items on closeout."

Target declined to offer details about its plans but said it's aligned with Pearl Milling Company.

Publix, H.E.B. and Shop Rite have not responded to requests for comment.

The decision to do away with Aunt Jemima was made last summer in the wake of the George Floyd tragedy as the uproar over Floyd's widely viewed murder motivated many major companies to address systemically racist business practices. Quaker Oats' June 2020 announcement that Jemima would be going away started an immediate domino effect for other food brands with problematic mascots.

Conagra confirmed a year ago that it would conduct a brand and packaging review for its Mrs. Butterworth's maple syrup bottle. B&G Foods said it would review its Cream of Wheat mascot, which, like Jemima, has origins rooted in blackface minstrel shows. Uncle Ben's rice has since rebranded as Ben's Original.

"As part of its rebranding journey, Pearl Milling Company set out to fulfill two promises: to continue delivering the same great-tasting products families have enjoyed for over a century and to inspire moments that matter around the breakfast table and in communities," the company said.