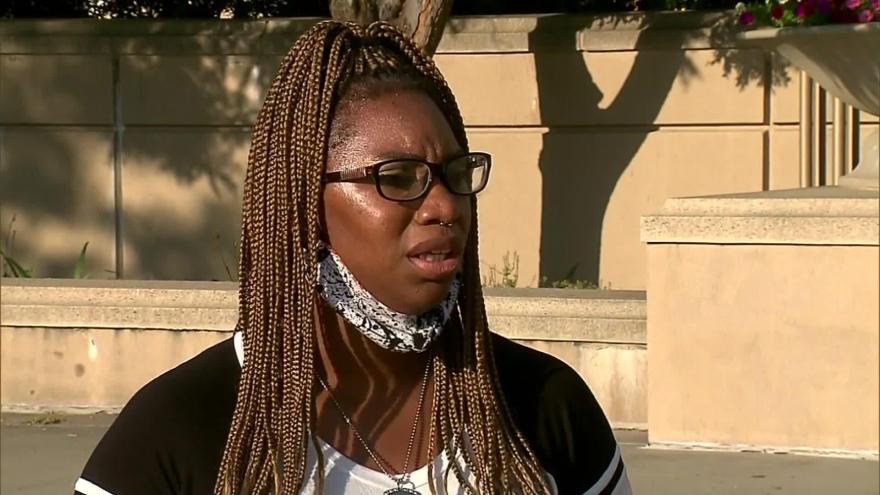 (CNN) -- Aurora, Colorado, police issued an apology Monday after drawing guns on a woman and four minors after mistaking her car for one that had been stolen.

A Facebook video shows the children on the ground in a parking lot, surrounded by police. They can be heard crying in the video. Onlookers try to intervene and question police about pulling their guns on their girls.

Gilliam and the four girls all are Black.

The incident comes amid a nationwide reckoning over police treatment of Blacks, spurred partly by the death in police custody of George Floyd in Minneapolis in May. Aurora police also have been under scrutiny for the 2019 death of Elijah McClain, a Black man who suffered a heart attack after police detained him.

"I have called (Gilliam's) family to apologize and to offer any help we can provide, especially for the children who may have been traumatized by yesterday's events," newly appointed Chief of Police Vanessa Wilson said late Monday. "I have reached out to our victim advocates so we can offer age-appropriate therapy that the city will cover."

In an interview with CNN, Gilliam said she was taking the girls to get their nails done the day of the incident. Her niece had just gotten back in the vehicle after looking to see whether the nail salon was open and she and the girls were parked in a parking lot with the car turned off, Gilliam said, when Aurora police pulled up behind her vehicle with guns drawn and yelled for them to put their hands out of the window and to get out of the car.

Gilliam and the girls got out of the vehicle and were told to lie face down on the ground, she said. At that time, police handcuffed Gilliam, her sister and niece. Gilliam said the police wouldn't tell her why she was pulled over until she was handcuffed.

Aurora police told Gilliam her vehicle was stolen, she said. Gilliam said she told them her vehicle has been stolen in February, but that it was cleared up. She said she offered to show them the vehicle registration and insurance paperwork.

Gilliam's attorney emphasized to CNN that when the vehicle was stolen in February, it was returned to her the next day by the Aurora Police.

Gilliam said she asked why the kids were being handcuffed and she was told officers handcuff kids when they get hostile.

"If you wanted to place me in handcuffs at that point, I would have gladly agreed to that because you had a job to do and you did it under the right protocol, but you pointed a gun at four kids and then you proceeded to start handcuffing the kids," Gilliam said.

Gilliam said police later told her about the mix-up.

"As a father of children of similar age, I could only imagine it was, you know, my daughter, who also likes to wear princess crowns, traumatized by that encounter, which was an incorrect identification by the Aurora police department," Polis said at his regular news briefing Tuesday.

Training and procedure under examination

Wilson said in a statement that drawing weapons is in the department's policy when police believe a car has been stolen.

"We have been training our officers that when they contact a suspected stolen car, they should do what is called a high-risk stop. This involves drawing their weapons and ordering all occupants to exit the car and lie prone on the ground. But we must allow our officers to have discretion and to deviate from this process when different scenarios present themselves," Wilson said. "I have already directed my team to look at new practices and training."

Officers were alerted to a possible stolen vehicle just before 1e1 a.m. Sunday, according to a statement from the department. They stopped a vehicle matching the license plate and description, ordered the people inside onto the ground and placed some in handcuffs, police said.

After the stop, officers realized the car Gilliam was driving was not stolen, but that another vehicle with the same plate information but from a different state had been, police said in the statement.

"The confusion may have been due, in part, to the fact that the stopped car was reported stolen earlier in the year," the statement said. "After realizing the mistake, officers immediately unhandcuffed everyone involved, explained what happened and apologized."

An internal investigation has been opened, according to the statement.

The Aurora Police Department has recently come under scrutiny for the in-custody death of McClain, a 23-year-old Black man who was stopped by three white officers as he walked home from a convenience store.

McClain was placed in a chokehold and briefly lost consciousness, according to a report from police. When paramedics arrived, they administered the drug ketamine to sedate McClain, the report said.

McClain suffered a heart attack while in an ambulance and was declared brain dead three days later, the district attorney said in a letter.

The police department fired the three officers involved. Colorado's health department has launched an investigation into the paramedics' use of ketamine.

Last month, Wilson fired two officers who she said had taken selfie photographs at the memorial site for McClain in October, as well as a third officer who she said failed to alert supervisors about the photos.

A fourth officer resigned before a pre-disciplinary hearing.

Wilson said one of the photos shows the officers smiling while appearing to reenact the way McClain was held in a chokehold.

Polis called on the new police chief to work ahead in transparency and rebuilding community trust.

"We need to do everything in our power to foster confidence and trust in law enforcement and for law enforcement to take that step to regain the trust of communities that events like this further erode," Polis added.