Australia to seal off 6.6 million people in virus-hit state as outbreak worsens 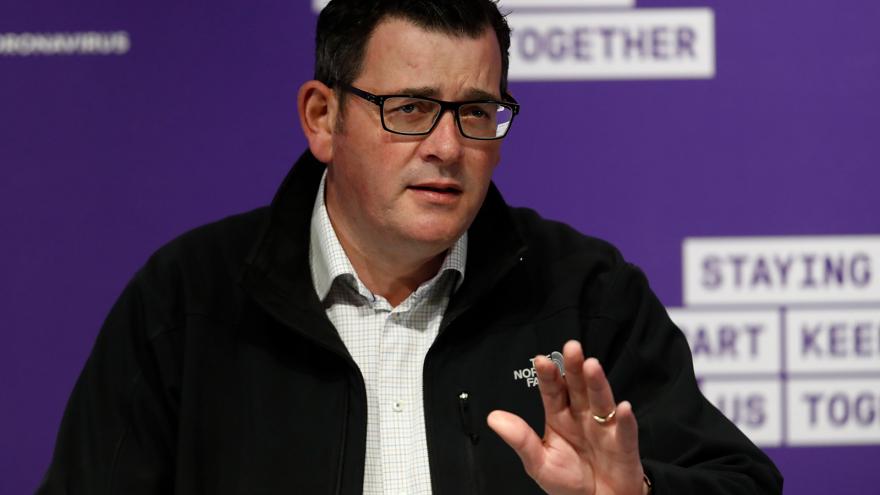 (CNN) -- Australia will isolate 6.6 million people in the state of Victoria from the rest of the nation at 11.59 p.m. on Tuesday, as authorities take drastic action to control a coronavirus outbreak in the city of Melbourne.

Military personnel and police will line the border, allowing very few people to cross, according to CNN affiliate 7NEWS.

Victoria has struggled to contain a second wave of coronavirus cases, leading to fears that the infection rate could soon rise across the country. Last week it emerged that some contracted workers in Melbourne were not following protocols at a hotel used to quarantine international arrivals to the state -- including reportedly having sex with people under lockdown.

The surge in cases has forced authorities to reimpose stay-at-home orders on dozens of suburbs and, on Saturday, 3,000 residents of nine densely populated public housing estates were suddenly put under a total lockdown.

On Sunday, Victoria recorded its highest daily spike of 127 new cases, including 16 in the nine public housing towers.

Coronavirus has infected 2,663 people and killed 22 in Victoria. Across Australia, more than 8,500 people have been infected and 106 have died, according to Johns Hokpins University's tally.

"It is the smart call, the right call at this time, given the significant challenges we face in containing this virus," Andrews said of the decision to seal off Victoria.

There are 55 ground crossings between Victoria and New South Wales, including four major highways, 33 bridges and two waterways. People who need to cross them, such as those who work in a different state, will be able to apply for permits to do so, Andrews added.

According to a statement released by the NSW government, all travelers returning from Melbourne and the state of Victoria will be required to go into 14 days of self-isolation, or face heavy penalties and fines.

It is unclear how this will impact the numerous border communities between the two states, or the constitutionality of the border closure. Section 92 of Australia's constitution says that "trade, commerce, and intercourse among the states, whether by means of internal carriage or ocean navigation, shall be absolutely free."

The hard lockdown imposed on the 3,000 public housing residents in Melbourne was initially intended to last for five days, but it could be extended if more cases are found, or if people refused to get tested, Andrews said.

All residents in the towers are being screened for the virus. So far, 398 tests have been conducted and 53 positive cases found. Tenants of the densely populated blocks are not allowed to leave their homes for any reason, and police have been stationed outside the towers to enforce the order.

Residents under stay-at-home orders in other parts of Melbourne, meanwhile, can still go out for grocery shopping, to exercise, and to work and school, if they cannot do so remotely.

Emma King, chief executive officer of Victoria Council of Social Services, said the hard lockdown in the tower blocks would "scare many people, and trigger memories of past trauma."

"Some public housing tenants have fled war or family violence. Some are dealing with mental health challenges. Many don't speak English as their first language. Many others work casual or insecure jobs," said King.

On Sunday morning local time, Andrews said residents would be provided with free rent and financial support. He acknowledged that many residents of the public housing units were in "poor health" and said that "this is not going to be a pleasant experience."

Thousands of meals as well as other essentials have been delivered in a "massive logistical exercise" to support the public housing residents, Andrews said, adding that there is "substantial" mental health and pharmacotherapy support for those in need.

Last week, Australian officials launched a judicial inquiry amid allegations a that the new coronavirus outbreak in the state of Victoria was sparked by some contracted workers not following protocols at a hotel used to quarantine international arrivals.

Andrews announced Thursday that the state government would provide $3 million to support the inquiry. He has previously said a number of cases in late May and early June could be linked to "an infection control breach in the hotel quarantine program."

Authorities in Australia have commandeered a number of hotels across the country as part of strict border controls intended to curb the spread of the coronavirus. Anyone who arrives in Australia must undertake a 14-day mandatory quarantine at the facilities, which are managed by the government.

Only Australian citizens and permanent residents are allowed into the country, with a few exceptions.

In a statement, the Rydges on Swanston hotel said it had been closed to guests since March 27 and operating as a government quarantine facility, but had not been involved in the hiring of security personnel.

"(The hotel) is fully supportive of the judicial Inquiry into the hotel quarantine program," the statement said.

CNN has reached out to the Stamford Plaza hotel for comment.

"It is abundantly clear that what has gone on here is completely unacceptable and we need to know exactly what has happened," Andrews said in the statement.

According to CNN affiliate 9 News, the alleged breaches include claims some workers had sex with guests in isolation, and a lack of training for the guards. A contracted security guard told the broadcaster's Today show that he received just five minutes of training before starting the job.

Officials have not confirmed the allegations, and CNN has reached out to the Victorian Department of Health and Human Services -- which manages quarantines in the state -- for comment. In an interview with CNN affiliate Channel Seven on Thursday, Australia's Minister for Health, Greg Hunt, said: "There are two cases where it appears that there have been clear breaches with significant ramifications."