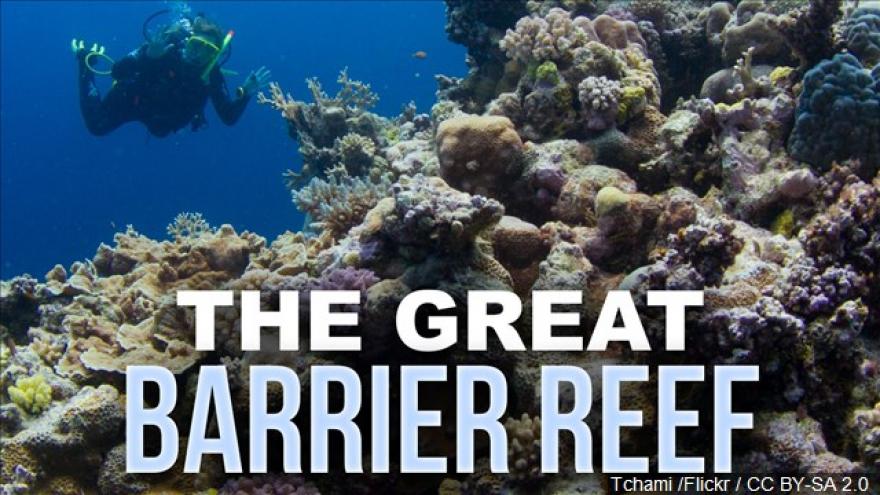 The 2,300 kilometer long coral reef -- a UNESCO World Heritage Site -- has been extensively damaged by a process known as coral bleaching in which warm water stresses the organism and causes it to die. Photo courtesy Tchami /Flickr / CC BY-SA 2.0

(CNN) -- Australian scientists are optimistic that a fertility treatment for coral could help regenerate the Great Barrier Reef.

The 2,300 kilometer long coral reef -- a UNESCO World Heritage Site -- has been extensively damaged by a process known as coral bleaching in which warm water stresses the organism and causes it to die.

Scientists last November took microscopic sperm and eggs during the reef's annual coral spawning event and put them into giant tanks for fertilization at the Heron Island Research Station.

The more than a million coral larvae that resulted were then planted back onto the reef.

A year later, the team lead by Professor Peter Harrison from Southern Cross University returned to find that the juvenile corals had successfully established themselves on the reef.

"This pilot study carried out on Heron Island shows that our new techniques to give corals a helping hand to conceive and then settle, develop and grow in their natural environment can work on the Great Barrier Reef," Harrison said in a statement.

"The success of this new research not only applies to the Great Barrier Reef but has potential global significance -- it shows we can start to restore and repair damaged coral populations where the natural supply of coral larvae has been compromised."

The scientists used the technique again this November and Harrison said they had already observed successful settlement of the new coral larvae.

"We'll be monitoring the growth of both coral colonies and working to further refine the technique for potentially broader application in the future," he said.

Coral bleaching is a stress response that happens when an increase in sea temperatures causes the expulsion of algae that grow inside coral, turning the reefs white and eliminating their main energy source. It's directly linked to global warming.

Bleaching doesn't kill coral straight away -- if temperatures drop, the algae has the chance to recolonize. But if temperatures remain high, eventually the coral will die, removing the natural habitat for many species of marine life.

Earlier this month, Tourism and Events Queensland released images of the coral spawning this year, an "extremely positive" sign that the reef was recovering.

"Typically it would take several years for this to happen so this is extremely positive news for the reef," spokesman Jarrod Meakins said. Large colonies of a reef-building coral were part of the spawning and it was expected that there would be another spawning event in December, he added.

During the spawning event the coral release trillions of eggs and sperm into the ocean in the hope they find a matching mate to create new coral. The spawning takes place after a full moon with timing also thought to be affected by factors including the length of the day and salinity of the water.

UNESCO's report on coral ecosystems, released in June, states that "soaring ocean temperatures in the past three years have subjected 21 of 29 World Heritage reefs to severe and/or repeated heat stress, and caused some of the worst bleaching ever observed at iconic sites like the Great Barrier Reef."

The Great Barrier Reef is home to the world's largest collection of coral reefs, with around 400 types of coral and 1,500 species of fish. It is also home to a number of endangered species, including the large green turtle and the dugong.

The Reef is worth an estimated $3.7 billion annually to the Australian economy through fishing and tourism.

Around 275 million people globally directly rely on reefs for livelihood and sustenance, and globally they form the nurseries for around a quarter of the world's fish, according to the UN.

Harrison's research was funded by the Great Barrier Reef Foundation.

'One piece of the puzzle'

The Great Barrier Reef Marine Park Authority's chief scientist David Wachenfeld described the larval reseeding as "one piece in the puzzle" of protecting the reef.

"It is vital everyone keeps working to address climate change and build the Reef's resilience, and for restoration strategies to be developed that can work over large areas," Wachenfeld said.

"The success of these first trials is encouraging -- the next challenge is to build this into broader scale technology that is going to make a difference to the Reef as a whole."

Harrison's team had previously used the technology on a damaged reef in the Philippines, where he said the larvae had grown to "dinner plate sized adult colonies" within three years, with the ability to reproduce.