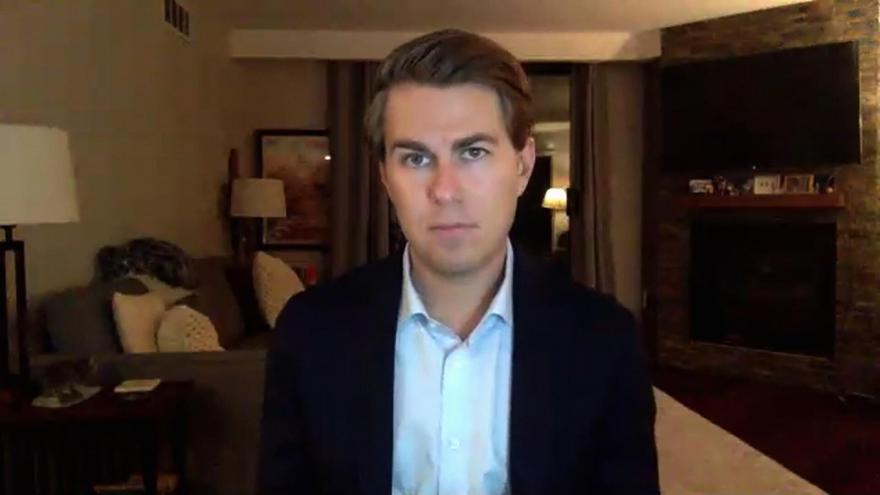 The anonymous senior Trump administration official who wrote a 2018 New York Times op-ed and a subsequent book critical of President Donald Trump is Miles Taylor, he revealed in a statement to CNN on Thursday.

(CNN) -- The anonymous senior Trump administration official who wrote a 2018 New York Times op-ed and a subsequent book critical of President Donald Trump is Miles Taylor, he revealed in a statement to CNN on Wednesday.

Taylor, who was chief of staff to Department of Homeland Security Secretary Kirstjen Nielsen, wrote a lengthy statement explaining why he penned the 2018 op-ed declaring he was part of the "resistance" inside the Trump administration working to thwart Trump's worst inclinations. Taylor said that he wanted to force Trump to respond to the charges he was leveling without the ability to attack the messenger specifically. Trump called the op-ed treasonous.

"Much has been made of the fact that these writings were published anonymously. The decision wasn't easy, I wrestled with it, and I understand why some people consider it questionable to levy such serious charges against a sitting President under the cover of anonymity. But my reasoning was straightforward, and I stand by it," Taylor wrote.

"Issuing my critiques without attribution forced the President to answer them directly on their merits or not at all, rather than creating distractions through petty insults and name-calling," Taylor added. "I wanted the attention to be on the arguments themselves."

Taylor joined CNN as a contributor in September 2020.

He had previously denied that he was "Anonymous." Asked in August by CNN's Anderson Cooper if he had written the op-ed and book, Taylor said, "I wear a mask for two things, Anderson: Halloweens and pandemics. So no."

Taylor's statement answers one of the biggest mysteries of Trump's presidency. Trump responded furiously to the op-ed when it was written in 2018, and urged then-Attorney General Jeff Sessions to investigate the matter. There was an internal hunt at the White House to uncover the identity of the author, and it spawned months of parlor games in Washington guessing at who was behind the op-ed through the speech patterns and phrases used.

A year later, Taylor released the anonymously authored book titled, "A Warning," which included new details critical of the President from inside the Trump administration. He wrote that members of Trump's team considered sabotaging him to prompt Trump to resign, and that many administration officials kept their own letters of resignation in their desks or on their laptops.

Since leaving the Trump administration in 2019, Taylor endorsed Democrat Joe Biden in August and co-founded a Republican group that is opposed to Trump.

"I am a Republican, and I wanted this president to succeed," Taylor said in his statement Wednesday. "But too often in times of crisis, Donald Trump has proven he is a man without character, and his personal defects have resulted in leadership failures so significant that they can be measured in lost American lives."

The White House has criticized Taylor since his endorsement of Biden, and Trump called him a "disgruntled employee."

White House press secretary Kayleigh McEnany said in a statement Wednesday after Taylor's identity was revealed that "this low-level, disgruntled former staffer is a liar and a coward who chose anonymity over action and leaking over leading."

"It is appalling a low-ranking official would be granted anonymity and it is clear the New York Times is doing the bidding of Never-Trumpers and Democrats," McEnany said.

Taylor said he was hopeful that more people inside the government would speak out against Trump, noting that several senior officials have done so in different ways since leaving the administration.

"I witnessed Trump's inability to do his job over the course of two-and-a-half years inside the administration. Everyone saw it, though most were hesitant to speak up for fear of reprisals," Taylor wrote.

In the 2018 op-ed, which was titled, "I Am Part of the Resistance Inside the Trump Administration," Taylor anonymously wrote that "many of the senior officials in his own administration are working diligently from within to frustrate parts of his agenda and his worst inclinations."

But Taylor said that original assertion was incorrect.

"The country cannot rely on well-intentioned, unelected bureaucrats around the President to steer him toward what's right," Taylor said Wednesday. "He has purged most of them anyway."

This story has been updated with a statement from the White House.