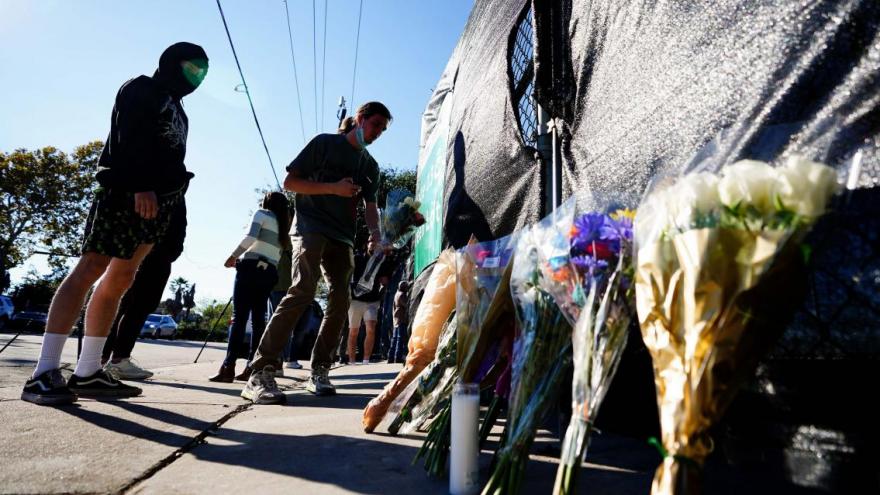 A festival patron is seen leading flowers outside of the canceled Astroworld festival at NRG Park on November 6, 2021 in Houston, Texas.

(CNN) -- After a crowd surge at a Houston concert that left eight people dead and dozens injured, officials said they will investigate key causes and what could have been done to get attendees out of harm's way.

The Friday night crowd at the sold-out Astroworld Festival, headlined and organized by rapper Travis Scott, was so tightly packed that when audience members were pushed toward the stage, some told CNN that they were crushed to the point where they couldn't breathe and passed out.

One security officer was struck in the neck during the concert while trying to restrain an audience member.

"When he was examined, he went unconscious. They administered Narcan," Houston Police Chief Troy Finner said Saturday of the security officer. "He was revived, and the medical staff did notice a prick similar to what you would get if somebody was trying to inject. That is one part of it."

There were several other incidents Friday where the drug was administered, Houston Fire Chief Sam Peña said.

Narcan is a drug used to treat narcotic overdoses.

Other attempts to save lives included some people administering CPR. Former Marine Lucas Naccarati said he performed CPR on two people who passed out.

"That was a different world. I immediately thought, 'This is not OK. Someone is going to die here," he told CNN. "I've never seen a mass amount of bodies dropping that fast before."

The victims who died include a 14-year-old

With 50,000 people in attendance at NRG Park -- the stadium complex where the Astrodome and the NRG Stadium stand -- the crowd surge started after 9 p.m. on Friday.

"The crowd for whatever reason began to push and surge towards the front of the stage, which caused the people in the front to be compressed -- they were unable to escape that situation," Peña told CNN.

The chaos sent at least 25 people to the hospital, and 13 of them remained there Saturday afternoon, Houston Mayor Sylvester Turner said. Five of them are under the age of 18, he said.

The ages of the victims who died ranged from 14 to 27, and the age of one person who was killed remains unknown, Turner said.

The causes of their deaths are pending the medical examiner's determination, Peña said.

Officials said they will review video from the scene and assess how the venue was laid out as part of the investigation into the tragedy .

The investigation will cover "what caused, one, the issue of the crowd surge, and two, what prevented people from being able to escape that situation," Peña said Saturday.

Scott was on the outdoor stage when he paused and looked at the crowd in confusion as an ambulance with flashing lights moved through the audience, according to a video of the event.

On Saturday, Scott posted on his Instagram account's story that he's sending out prayers to the lives lost, adding that he's been working with Houston authorities.

"I'm honestly just devastated," Scott said as he repeatedly sighed and rubbed his forehead. "We're actually working right now to identify the families so we can help assist them through this tough time."

'Like we were drowning in a pool filled of just people'

With scores of people injured as they were pushed toward the stage, some audience members told CNN that they couldn't breathe and thought they might die.

Sarai Sierra, who went to the festival to celebrate her birthday, said she saw multiple people who could not breathe after Scott appeared on stage.

"I truly thought that if I fell it would've been the end of me. I spent at least 15 minutes just getting pushed around due to mosh pits or simply because people were 'raging,'" Sierra said.

Sierra, who attended the festival with friends and family, added that she saw about 20 people who could not breathe, including one person who suffered a seizure before her eyes.

"It felt like we were drowning in a pool filled of just people," she said.

Nick Johnson and Angel Rodriguez, who also went to the festival, said a crowded atmosphere built up over an extended period of time.

"It was going on for over two hours," Johnson said. "It just got worse and worse, everyone's like, you just can't breathe, you just feel like there's a weighted blanket on you."

And once people were pushed toward the stage, breathing got more challenging, Rodriguez explained.

"When you get pushed back, people always fall over," Rodriguez said.

In 2019, the Astroworld Festival saw a similar incident when thousands rushed to get into the festival. Three people were trampled and hospitalized

Officials ramped up security after the 2019 trampling incident, gearing 528 Houston police officers at the concert and an additional 755 private security personnel, the police chief said.