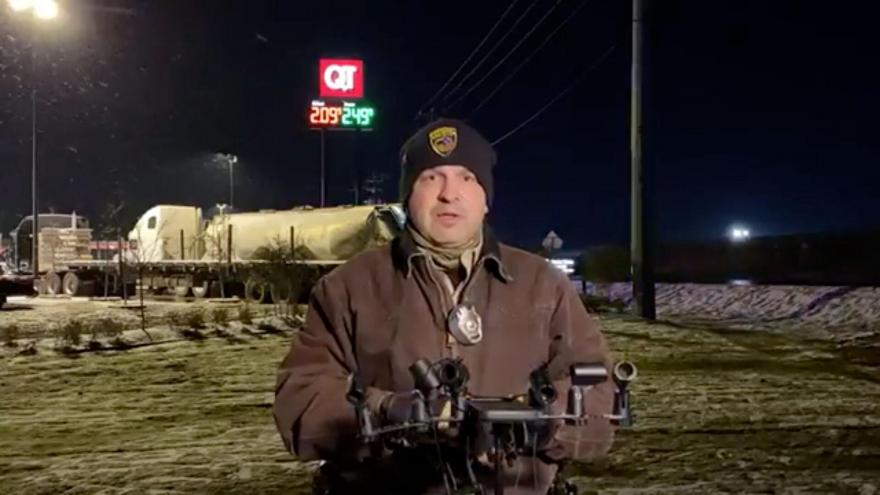 Authorities in Texas are searching for at least 100 undocumented immigrants they say fled from a refrigerated truck parked at a gas station in the San Antonio area, Bexar County Sheriff Javier Salazar said at a press conference Thursday.

(CNN) -- Authorities in Texas are searching for at least 100 undocumented immigrants they say fled from a refrigerated truck parked at a gas station in the San Antonio area, Bexar County Sheriff Javier Salazar said at a press conference Thursday.

Salazar said authorities received a call that "undocumented immigrants were being smuggled into the country" and that they were pleading for air. When deputies found the truck, they saw saw people jumping off it. As other deputies arrived, "a large crowd of people poured out of the truck and ran to the woods," Salazar said.

At least 50 people have been detained, among them 38 men and 12 women, who were all found to be in good health after being examined by emergency workers, Salazar said. There were no children among those detained. But there are still others who are unaccounted for and Salazar says that is worrisome given the frigid weather conditions.

"It's sub-zero temperatures here, just about, and it's still snowing. And our concern is people are going to be very much exposed to the elements and quite frankly, we're worried some of these people may be in distress very, very soon here," Salazar said.

But Salazar says he believes some of the smugglers could be among those who ran away from the truck.

Right now, authorities are trying to find out more about those involved and figure out who placed the call. He added that those traveling in the truck had "ripped off the gasket from one of the doors, trying to get some fresh air into the truck," before they fled.

Salazar said that most of the immigrants are from Guatemala and El Salvador and officials with Homeland Security Investigations (HSI) are now helping with the probe. He added that there is video evidence of the incident that would be made public at some point.

Authorities are still looking for the people who ran into the woods, especially since many of them were wearing only jeans and T-shirts in the bitter cold and snow.

Officials said they received a similar call last week. A man speaking Spanish called 911 and said he was inside a tanker trailer carrying 80 smuggled migrants to San Antonio.

Homeland Security Investigations officials have taken over that probe as well.