Authorities crack down on Portland protests after weekend of violence 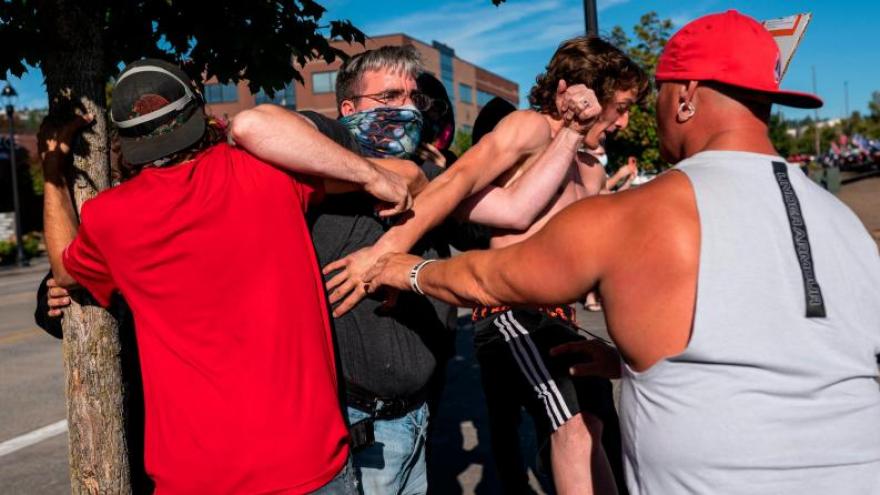 A black Lives Matter protester scuffles with attendees of a pro-Trump rally during an event held to show support for the president on August 29, 2020 in Clackamas, Oregon.

(CNN) -- As Portland, Oregon, grapples with three straight months of protests and a deadly shooting on Saturday, Gov. Kate Brown is putting out her own plan to try to calm clashes over protests in the city.

"We all must come together -- elected officials, community leaders, all of us -- to stop the cycle of violence," the governor said in a news release Sunday evening.

Protests in the city broke out in the wake of the death of George Floyd in police custody. The demonstrations that denounce police brutality and racial injustice picked up again after last weekend's shooting of Jacob Blake in Wisconsin. On Saturday, protests turned violent with clashes between Trump supporters and protesters.

The governor said three neighboring law enforcement jurisdictions -- Clackamas County, Washington County and the city of Gresham -- will help the Portland Police Bureau deal with the protests. Federal prosecutors and the FBI also will be assisting with investigation of criminal activity and Oregon State Police troopers will be helping with patrols, Brown said.

"I will continue to work with local leaders, law enforcement, and community leaders to bring all voices to the table to help end the nightly confrontations -- but that will only come if we commit ourselves to do the hard work to bring about real change and racial justice," said Brown.

Brown will convene a community forum which will include Portland Mayor Ted Wheeler, Black protest organizers and community leaders to discuss racial justice and police reform, according to a statement from the governor's office.

Later Sunday night, Portland Police declared a demonstration in front of the Penumbra Kelly building an "unlawful assembly." Protesters chanted "stolen land, stolen people" and "Black lives matter" as they drummed and held up reflective gear outside the office building used by police, which has been the target of demonstrations. A bright light from the opposite direction was directed at them.

Video from CNN affiliate KPTV showed officers in uniform, including sheriff's deputies and state troopers, restraining and leading protesters away one at a time.

"Failure to adhere to this order may subject you to arrest, citation, and/or the use of crowd control agents," the Portland Police Bureau tweeted.

The governor's plan follows a fatal shooting during Saturday protests where a man wearing a Patriot Prayer hat was killed, according to the New York Times. The victim has not been identified by local authorities.

Patriot Prayer is a far-right group based in Portland that has clashed with protesters in the past.

Earlier Saturday night, police tweeted that there had been "some instances of violence between demonstrators and counter-demonstrators" when a political rally caravanned through downtown Portland.

"The right-wing group Patriot Prayer and self-proclaimed militia members drove into downtown Portland last night, armed and looking for a fight," the governor said. "Every Oregonian has the right to freely express their views without fear of deadly violence. I will not allow Patriot Prayer and armed white supremacists to bring more bloodshed to our streets."