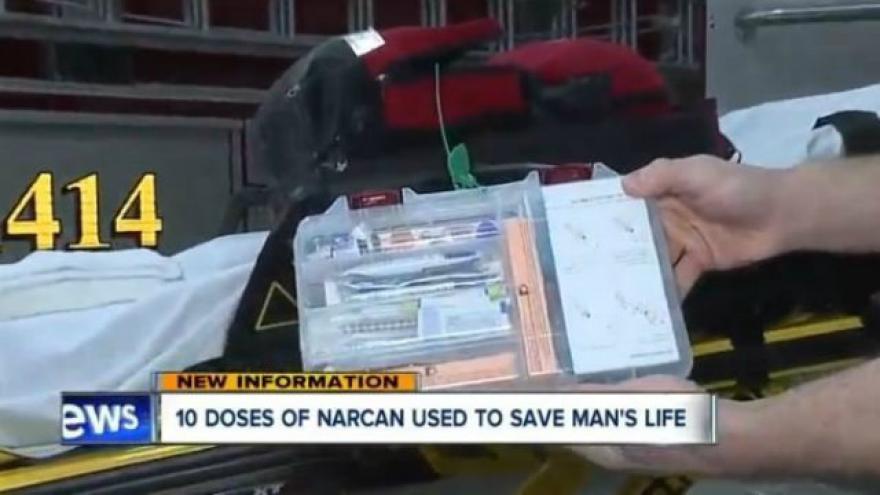 Wiloughby police and fire officials used 10 doses of Narcan to revive a driver who was passed out behind the wheel. Photo courtesy WEWS

Willoughby (WEWS) -- Willoughby police and fire officials used 10 doses of Narcan to revive a driver who was passed out behind the wheel on Sunday.

Police responded to the area of State Route 2 and Vine Street just after 10 p.m. for a report of a man passed out behind the wheel of a pick up truck.

By the time officers got there, the driver had moved, but witnesses said the truck was stopped on State Route 91, just south of Euclid Avenue.

Officers found a Ford-350 truck stopped in the roadway. The break lights were activated on the truck.

The entire encounter was caught on body camera.

The video shows officers approaching the car with a man slumped over in the drivers seat. They sprang into action getting their narcan kits, and they gave the driver, later identified as Anthony Sobecki, 37, of Wickliffe, the nasal spray. They shook him once, but he wasn't awake, so they tried again and still nothing.

Willoughby fire arrived to the scene and gave Sobecki eight more doses before he regained consciousness.

"Ten milligrams is a substantial amount of narcan to give somebody, but its also not uncommon to have to give 10 or more," said Willoughby firefighter and paramedic Daniel Carroll.

Carroll wasn't there for this specific call, but says sadly, he responds to overdoses weekly.

"It's definitely a higher stress level call, because you have that family member their loved ones who are counting on you to do something to help that person," he said.

Protocol for Willoughby firefighters is to give no more than 10 doses of narcan per overdose victim, and they are starting to need all of those doses

"It just depends on a lot of different factors, whether or not that opioid such as heroin was mixed with a more powerful opioid such as fentanyl or carfentanil," he said.

These deadly mixtures are making it harder for police, who usually get there first, to save lives. They usually only carry two doses per officer.

"With the heroin and the mixture of fentanyl and carfentanil is its causing so much more need for the narcan so our officers only have the two vinyls and once their used up, we have to wait for the fire department to get on scene to administer more," said Willoughby police detective sergeant Derrick Stewart.

Sobecki was taken to Lake West Medical Center for treatment. He was later charged with an OVI, driving under suspension and driving in marked lanes. Additional charges could be forthcoming.

His initial court appearance is scheduled for March 7 at 8:15 a.m. at Willoughby Municipal Court.