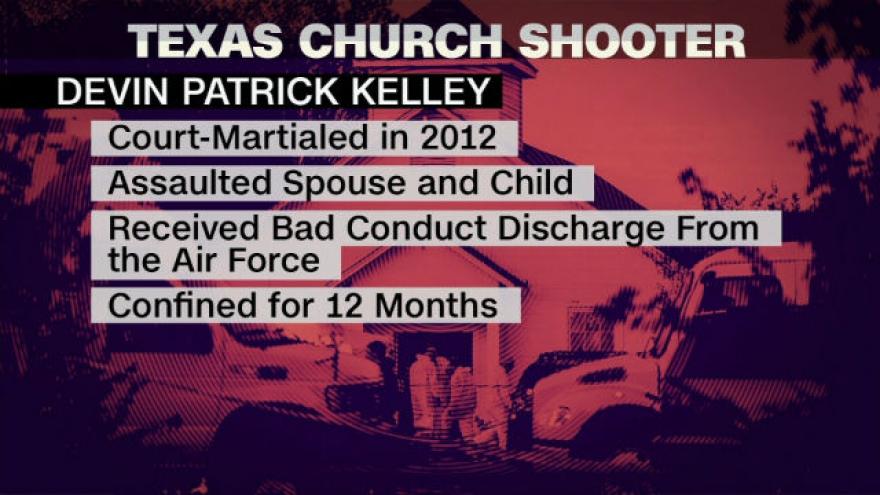 Sunday\'s church massacre took place in Sutherland Springs, Texas. In addition to the at least 26 people who were killed, at least 20 others were wounded -- the victims ranging in age from 5 to 72 years old. Photo courtesy CNN

Kelley, 26, was also shot in the leg and torso by an armed citizen, said Freeman Martin of the Texas Department of Public Safety, citing autopsy results. Kelley was found dead in his vehicle.

A day after the deadliest shooting in Texas history, the US Air Force and Department of Defense said they are probing how records of a domestic violence conviction the gunman received while in the Air Force -- which would have disqualified him owning a firearm under federal law -- were handled.

The US Air Force acknowledged it did not appropriately relay Kelley's court martial conviction for domestic assault to civilian law enforcement, as required, preventing it from showing up in a federal database that licensed gun dealers must check before someone can buy a firearm.

"Initial information indicates that Kelley's domestic violence offense was not entered into the National Criminal Information Center database by the Holloman Air Force Base Office of Special Investigations," an Air Force statement said.

There was nothing in the FBI's National Instant Criminal Background Check System that indicated Kelley should be barred from owning a firearm, said Christopher Combs, the special agent in charge of the bureau's San Antonio division.

A federal law enforcement official told CNN that federal authorities have found no records they were notified of the conviction.

"Somebody ... really dropped the ball in this case and there's 26 dead people now," Don Christensen, the former Air Force chief prosecutor when Kelley was sentenced, said.

Kelley served at Holloman Air Force Base in New Mexico from 2010 until his discharge in 2014, according to Air Force spokeswoman Ann Stefanek.

He was court-martialed in 2012 for assault on his spouse and assault on their child, according to Stefanek. He served a year in confinement, received a bad conduct discharge and had his rank reduced, she said.

Authorities: Gunman went to the church 'with a purpose'

Kelley killed his grandmother-in-law during the attack, multiple friends of the woman told CNN.

The gunman was obsessed with a domestic dispute, and had sent threatening text messages to his mother-in-law. He texted her as recently as Sunday morning, not long before he carried out the mass shooting, authorities said.

"We know that he expressed anger towards his mother-in-law, who attends this church," Martin said.

"There are many ways that he could have taken care of the mother-in-law without coming with 15 loaded magazines and an assault rifle to a church," Martin said. "I think he came here with a purpose and a mission."

But Kelley's mother-in-law was not inside the First Baptist Church in Sutherland Springs when Kelley sprayed the congregation with gunfire. The unborn child

The gunman's grandmother-in-law, Lula White, was the grandmother of Kelley's wife and often volunteered at the church, according to friends and her Facebook profile.

The friends asked not to be named as the family has decided to not speak to the media about White's death at this time, though a few have posted on social media

The pastor of the church was out of town when the shooting occurred, but his daughter, 14-year-old Annabelle Pomeroy, was at the Sunday morning service and was killed, her mother Sherri Pomeroy said.

"We lost more than Belle yesterday, and the one thing that gives me a sliver of encouragement is the fact that Belle was surrounded by her church family that she loved fiercely, and vice versa," Sherri Pomeroy said.

In all, eight members of the Holcombe family spanning three generations, including a pregnant woman and three of her children, were killed, said Ron Scott, the visiting pastor's first cousin said.

Many of the victims have not been publicly identified, pending notification of family members.

Who was the shooter?

Kelley was involved in "multiple occasions of domestic abuse" against his wife and stepson, Christensen said.

"During this time, he would often be physically violent with his son," Christensen said, adding that Kelley "violently" shook the child.

The child "suffered fractures, had a subdural hematoma," Christensen said.

Kelley "admitted to, out of anger, pushing his son down and injuring him," Christensen said. The gunman was charged after he confessed to the committing the offenses, according to Christensen.

At one point, the shooter tried to get a license to carry a gun in Texas but was denied by the state, Abbott said, citing the director of Texas' Department of Public Safety.

"So how was it that he was able to get a gun? By all the facts that we seem to know, he was not supposed to have access to a gun," Abbott said. "So how did this happen?"

He drove across the street, got out and began firing even before he entered the church, Martin said.

David Flores told CNN that his father saw the shooter.

"My dad saw the gunman run into the church building and then he heard shots and saw people running," Flores told CNN. "People covered in blood and screaming. It was pandemonium everywhere."

As the shooter left the church, a local resident used his own rifle to engage him, Martin said. The gunman dropped his weapon and fled.

Johnnie Langendorff said he was driving to his girlfriend's house when he saw the shootout between the shooter and the armed resident.

The gunman took off in a Ford Explorer, Langendorff told CNN affiliate KSAT.

The resident "briefed me quickly on what had just happened and said we had to get him, and so that's what I did," Langendorff said.

They gave chase in his truck and called police. As they sped after him, Langendorff said, the shooter "eventually lost control on his own and went off into the ditch" in neighboring Guadalupe County.

"The gentleman that was with me got out and rested his rifle on my hood and kept it aimed at him [shooter], telling him to get out. There was no movement, there was none of that. I just know his brake lights were going on and off, so he might've been unconscious from the crash or something like that. I'm not sure."

Law enforcement later found the suspect dead of a gunshot wound inside his vehicle.

A law enforcement official briefed on the investigation said multiple weapons were found in the shooter's car. The FBI and the Bureau of Alcohol, Tobacco, Firearms and Explosives are involved in the investigation.

The grief and support

Hours after the shooting, residents of Sutherland Springs hugged one another, held candles and sang hymns in a vigil Sunday night. Abbott attended the event, in which faith leaders offered words of solace and prayers.

Authorities said 4% of the small town's population was killed in the shooting.

Sutherland Springs is the kind of place where "everybody knows everybody," said Gloria Rodriguez Ximenez, who attended the vigil.

"This is a small, Christian town, a very small community," she said. "Everybody's united. Everybody's so close to everybody."

She knows the First Baptist Church's pastor and his family, including their daughter who died.

"I can feel the pain everybody's going through. There's so much hurt for a small town," Ximenez said.

Others echoed the feeling of shock and heartache.

"My heart is broken," Wilson County Commissioner Albert Gamez Jr. told CNN. "We never think where it can happen, and it does happen. It doesn't matter where you're at. In a small community, real quiet and everything, and look at this."