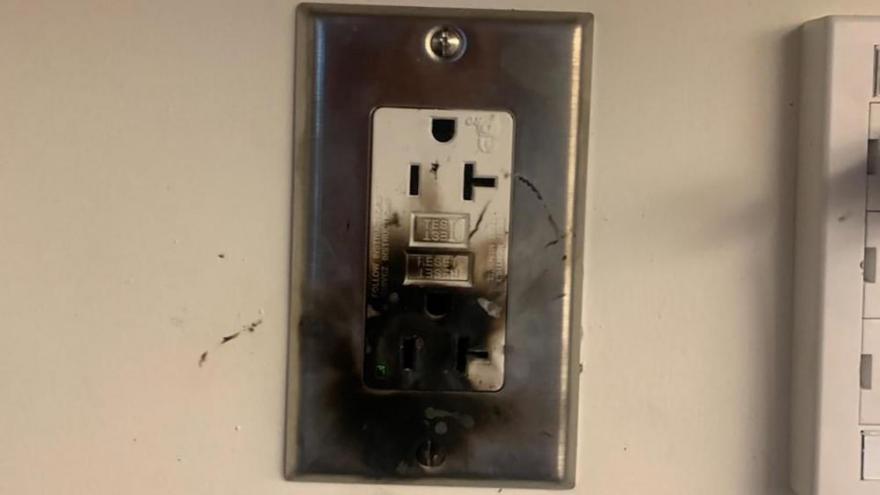 (CNN) -- Authorities in Massachusetts are warning of an electrical "outlet challenge" video on TikTok after three incidents sparked concern, including two in schools.

The video on the social media platform involves using part of a phone charger, a wall outlet and a penny to cause sparks, electrical system damage and possibly fire, said Massachusetts Fire Marshal Peter J. Ostroskey in a letter alerting fire departments and educators.

School Superintendent Gary Maestas said there were no injuries or significant damage.

"We are working with the Plymouth Police and Fire Departments to fully understand the scope of this issue and pursue charges to the fullest extent of the law," said Maestas in a statement posted to Twitter.

Two 15-year-old male students face charges of attempted arson and malicious damage to property under $1,200, according to Plymouth police.

Bradley told CNN that he believes it's only a matter of time before someone gets hurt.

"I don't think students comprehend the reality that they can be electrocuted and killed, or start a fire," said Bradley. "Parents need to talk to their children and tell them if you see this stuff, don't try to imitate it."

At Westford Academy on Friday, a spark ignited an outlet and generated smoke, setting off the school's fire alarm, according to Westford Fire Department Spokesman Donald Parsons.

"This was a very serious incident that could have caused a lot more damage," said Westford Academy Principal James Antonelli in a statement to parents. "The student involved has been identified and the Westford Academy administration is taking appropriate action at this time."

Another incident was reported in Holden, after a concerned mother sent a photo of a scorched electric socket to a news outlet, said Ostroskey.

He is encouraging school officials and parents to look for signs of foul play, like scorched outlets, and to have conversations about fire and electrical safety with tweens and teenagers.